Mohamed Kuno has been identified by Kenyan authorities as the mastermind behind the attack of a college in Garissa.

Authorities in Kenya have identified the mastermind behind the deadly terror attack on a college in the northeastern city of Garissa as Mohamed Kuno, known by several aliases, including Mohamed Muhamed, Sheikh Mahamad, Dulaydin and Gamadhere.

Masked gunmen affiliated with the Somalia-based militant group Al-Shabaab stormed the school, killing 147, wounding about 80 and taking hostages, according to CNN. More than 500 students were accounted for of the 815 at the school, officials said.

The four terrorist gunmen were killed after taking hostages at the school.

Witnesses spoke of the gunmen firing indiscriminately as they assaulted the school near the Kenyan border with Somalia early Thursday morning. They were said to be targeting Christians and non-Muslims, according to CNN.

1. A Reward Has Been Issued by Kenyan Police

The reward for Mohamed Kuno, a native of Kenya, is 20 million Kenyan shillings, which is about $215,000 U.S. dollars. 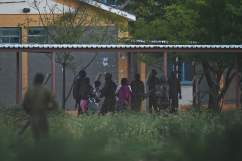 2. He Has Been on the Run Since December

Security forces take up positions near the Moi university campus during an attack by Somalia’s Al-Qaeda-linked Shebab gumen in Garissa on April 2, 2015. (Getty)

Authorities named Mohamed Kuno as a wanted terrorist in December and he has been on the run since then, according to the Daily Nation, a Kenyan news outlet.

3. He Was a Teacher in Garissa

Students of the Moi University leave after escaping an attack by Somalia’s Al-Qaeda-linked Shebab gumen in Garissa on April 2, 2015. (Getty)

The Daily Nation said a security briefing identifies Mohamed Kuno as a former teacher and principal at Madrasa Najah in Garissa. He worked there from 1997-2000, according to AllAfrica.com. He also worked for the Al Haramain Foundation between 1993 and 1995, when he was known as Sheikh Mahamad Afte, according to the website.

4. He Is the Leader of Al-Shabaab’s Forces in the Juba Region of Somalia

According to the security briefing reported on by The Daily Nation, Mohamed Kuno leads Al-Shabaab forces in the Juba region of Somalia, an area that shares a border with Kenya, including Garissa county.

He is in charge of Al-Shabaab missions against Kenya, according to the report, and uses family members in attacks.

5. He Has Claimed Responsibility for a Bus Attack That Killed 28

A picture taken on November 22, 2014 shows the bus on which was carried out a dawn attack and 28 non-Muslim passengers were singled out from 60 and executed. (Getty)

According to News-Kenya.com, authorities named Mohamed Kuno as having claimed responsibility for the Nov. 22, 2014 Mandera bus massacre, which left 28 people dead.

The bus was hi-jacked by the Al-Shabaab gunmen and the non-Muslin passengers were seperated out and killed, according to Al Jazeera. The bus was headed to Nairobi.

The Guardian reported that Kenyan forces retaliated with raids in Somalia, killing 100 Al-Shabaab fighters in the days after the bus massacre. Kenya’s vice president, William Ruto, said at the time, “Following the Mandera bus attack, our security forces swiftly initiated a response. They identified, followed and struck the perpetrators of these heinous crime.”

The government offered a $2 million reward for him after that attack. The Al-Shabaab militants are also responsible for the September 2013 Westgate Mall terror attack, where 67 were killed.

Loading more stories
wpDiscuz
1
0
Would love your thoughts, please comment.x
()
x
| Reply
Mohamed Kuno has been identified by Kenyan authorities as the Al-Shabaab mastermind behind the attack on a college in Garissa that left 147 dead.