Republican Ron Paul, Sen. Rand Paul’s father, has had his share of the political limelight since his first Congressional campaign in 1974. Since then, he’s been a Congressman for Texas’ 14th and 22nd districts – a Congressional career that lasted 37 years – and a three-time Presidential candidate for two different parties.

Throughout his career, Paul has been a strong force on the side of libertarianism, rallying a dedicated number of supporters for a limited and non-interventionist government.

Although he stepped down from Congress in 2013, Ron has continued to push his political beliefs through programs such as the Ron Paul Institute for Peace and Prosperity and his home school curriculum. His grassroots supporters have even organized forums dedicated to the former Congressman.

Even though The New York Times doesn’t think Ron will play a big role in Rand’s campaign, the public may still scrutinize the father’s political legacy. CNN wonders if Rand can escape his father’s shadow.

Here’s what you need to know about Ron Paul:

1. He Is a Libertarian Icon

During his political career, Ron became a poster boy for a very specific brand of libertarianism. He believes in limited government and a non-interventionist foreign policy, and bases many of his positions on constitutional rights. In 2008, his campaign claimed that “Paul never votes for legislation unless the proposed measure is expressly authorized by the Constitution.”

While determining whether rival Mitt Romney was a liberal, political scientists Howard Rosenthal and Kieth T. Poole declared Paul the most conservative Congressman from the period of 1937 to 2002. Paul was known to vote against his party, his constituents, and refused his congressional pension. According to Texas Monthly, he even voted against awarding Rosa Parks and Mother Teresa Medals of Honor, and a bill that would have helped prevent child pornography on the internet. His very conservative voting record earned him the nickname “Dr. No” from colleagues in Congress.

According to Fox News, he said of his philosophy, “The proper role for government in America is to provide national defense, a court system for civil disputes, a criminal justice system for acts of force and fraud and little else.”

His beliefs have earned him the support of many loyal followers and even a fan site. But both major political parties have been able to seclude the libertarian to a little corner of the electorate where he has failed to garner mainstream support during his bids for the presidency.

Since his retirement, Paul’s grassroots supporters have continued to discuss their views on the former Congressman’s unofficial forums known as the Ron Paul Forums. The site has also begun supporting his son’s bid for presidency.

Throughout this time our community of activists has been instrumental in raising millions of dollars for political campaigns, spearheading and funding countless grassroots projects and has played important roles in helping seat pro-liberty candidates into Congress and other elected positions.

Inspired by US Rep. Ron Paul of Texas, this site is dedicated to facilitating grassroots initiatives that aim to restore a sovereign limited constitutional Republic based on the rule of law, states’ rights and individual rights. We seek to enshrine the original intent of our Founders to foster respect for private property, seek justice, provide opportunity, and to secure individual liberty for ourselves and our posterity.

2. He Ran for President 3 Times

Paul ran for President on three separate occasions. In 1987, he resigned the Republican Party and joined the Libertarian Party, launching his first bid for the presidency in the 1988 election. A heated race between Republican George H.W. Bush and Democrat Michael Dukakis left no room for Paul, who barely made a scratch in the polls.

In 2008, Paul ran in the Republican primaries, but failed to win in any state. John McCain would eventually get the Republican nomination and lose to Barack Obama.

Paul campaigned one last time. Running a strong campaign during the Republican primaries, he won in Iowa, Maine, Minnesota, and Louisiana, but was unable to continue hunting for votes after his campaign ran out of funds. Mitt Romney would eventually get the Republican nomination and lose to President Obama.

3. He Launched a Home School Curriculum That Teaches ‘Biblical Principles of Self-Government

In 2013, Paul launched a libertarian-focused home school curriculum that aims to teach America’s youth “the history of liberty” and “biblical principles of self-government.” Known as the Ron Paul Curriculum, students from kindergarten to the 5th grade can enroll for free. Those wanting to study the grades 6-12 curriculum are charged a yearly flat-rate of $250 a year per family.

Paul did not seek government accreditation for the program, stating in his official announcement that:

A common feature of authoritarian regimes is the criminalization of alternatives to government-controlled education. Dictators recognize the danger that free thought poses to their rule, and few things promote the thinking of “unapproved” thoughts like an education controlled by parents instead of the state. That is why the National Socialist (Nazi) government of Germany outlawed homeschooling in 1938.

In the video above, Gary North, Director of Curriculum Development for the program, shares his vision for the program. At about 20 seconds into the video, North states the four goals of the curriculum:

In 2013, Paul founded a foreign policy institute known as The Ron Paul Institute for Peace and Prosperity. The institute “will fill the growing demand for information on foreign affairs from a non-interventionist perspective,” according to a press release.

The neo-conservative era is dead. The ill-advised policies pushed by the neo-cons have everywhere led to chaos and destruction, and to a hatred of the United States and its people. Multi-trillion dollar wars have not made the world a safer place; they have only bankrupted our economic future. The Ron Paul Institute will provide the tools and the education to chart a new course with the understanding that only through a peaceful foreign policy can we hope for a prosperous tomorrow.

Rand Paul Hasn’t Filed With the FEC: 5 Fast Facts You Need to Know

5. His Net Worth Is Estimated to Be at Least $2.5 Million

During his campaign in the 2012 Presidential election, Fox Business estimated that Paul’s net worth was somewhere between $2.25 million – $5 million. Celebrity Net Worth has his net worth at $4.9 million.

In 2011, Forbes called Paul a “master investor.” The publication broke down his stock investments: 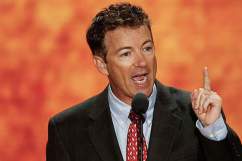 Loading more stories
wpDiscuz
0
0
Would love your thoughts, please comment.x
()
x
| Reply
Ron Paul, Sen. Rand Paul's father, has had his share of the political limelight since his first Congressional campaign in 1974. Here's what you need to know.