Andy Hallinan is the controversial owner of a Florida gun shop whose video defending the Confederate flag and declaring his Inverness store a “Muslim-free zone” went viral in July.

Hallinan is now teaming up with George Zimmerman to sell signed prints of an original painting of a Confederate flag by Zimmerman.

The owner of Florida Gun Supply and a self-described “patriot”, Hallinan has posted several videos defending the 2nd Amendment, claiming racism is on the rise because of President Obama and other American leaders and calling for Americans to “get armed, get trained and carry daily.”

Hallinan banned Muslism from entering his store after Muhammad Youssef Abdulazeez killed four Marines and a Navy sailor in a shooting at a military facility in Chattanooga, Tennessee, in July.

1. He & Zimmerman Will Be Splitting the Profits From the Painting

According to Hallinan’s website, the profits from the sale of the painting and prints will be split between him and Zimmerman, who have become friends after Hallinan’s controversial video ent viral.

“It will go to support their legal funds, living expenses, and advancing their mission to change the country,” the website says. “A percentage of the proceeds will also go directly to the Boys and Girls Club to help support the next generation!”

The painting, which also includes the phrase “The 2nd Protects Our First” is being sold for $48.90 on Florida Gun Supply’s website.

“This painting was painted in honor of Andy Hallinan for being a true patriot and leading the country into a better, safer America. Zimmerman’s last painting sold on Ebay for over $100,000,” Hallinan’s website states.

Hallinan also posted a video on Monday of him and Zimmerman (watch it above). 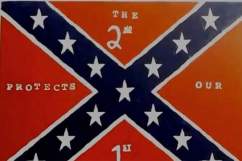 2. He Backed Out of a Meeting With a Local Muslim Group After Posting the Video

Andy Hallinan, center right, with George Zimmerman, and others. Facebook

After his controversial video went viral in July, Hallinan said he was going to meet with a local member of the Council on American-Islamic Relations and train him to shoot, but then backed out of the meeting after he said he learned CAIR has ties to terrorism.

“I don’t know who to trust,” Hallinan said in a video he posted on July 23. “When I was contacted by the Council for American-Islamic Relations (sic), I offered them to come meet at Florida Gun Supply. Thankfully hundreds of emails poured in with links and information about who this organization is. And I cannot in good faith meet with them and certainly cannot train with them. The United Arab Emirates has designated CAIR as a terrorist organization. That’s reason enough for me not to invite them down to Florida Gun Supply.”

CAIR said Hallinan backed out because of the negative response he received about their meeting.

“I think he succumbed to the negative pressure he got from the anti-Muslim bigots who were very upset at hearing that a Muslim leader would get trained in a Muslim-free zone,” Hassan Shibly, of CAIR Florida, told WFLA-TV.

Hallinan said, “The call to action across every state and every community is to get armed, get trained and carry daily. The only solution to violent crime in America is to get prepared for any situation. So I don’t want you to act violently, or rudely or or condescendingly to any Muslim for any reason. But do get educated, trained and armed.”

After the video was posted, CAIR called for an investigation into Hallinan’s “Muslim-free zone” by the Department of Justice.

The Florida chapter of CAIR also filed a federal law suit against Hallinan after their meeting proposal fell through, according to USA Today.

“American Muslims have a right to browse and purchase guns, take classes on gun safety and shoot guns at a range without having to be profiled and discriminated,” Hassan Shibly, chief executive director of CAIR Florida said in a statement. “Such discrimination is not only illegal, it is bad for our country and makes us less safe and less free.”

“The caption, ‘the 2nd protects the first’ is a double entendre,” Zimmerman said in a post on Hallinan’s website. “The first flag I painted on this canvas was an American Flag, but decided to repaint over it with the Confederate Flag when I heard Andy was getting sued by CAIR. The 2nd flag I painted was the Battle Flag – which we need in America in order to protect the first.”

4. Hallinan First Bought a Gun After the Aurora Theater Shooting

Hallinan with his girlfriend, Jamie Fowler, her son and his son at an event hosted by the gun shop. (Facebook)

Hallinan, who says he is a “high school dropout” from Massachusetts, said he first became interested in “security” in his life after the Aurora, Colorado, theater shooting in June 2012. He bought a gun and built a shooting range at his house.

Hallinan then became a firearms instructor. His store, Florida Gun Supply, “was born out of traditional American values.”

5. He Says His ‘Goal Is to Change America’

“My goal is to change America. No one else is standing up for America: so I am,” Hallinan says on his website.

“We are at war patriots,” Hallinan says in a video he posted. “With a biased media and a governmental leadership that wants to divide us. I’ll be called a racist and a bigot, but I’m not. I’m an American patriot standing up for what I believe in.” 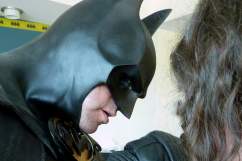