E’Dena Hines with her step-grandfather, actor Morgan Freeman, at the Golden Globes in 2005. Hines was fatally stabbed in New York City. (Getty)

The 33-year-old step-granddaughter of actor Morgan Freeman was fatally stabbed Sunday in New York City, by her boyfriend, police say

E’dena Hines was found at about 3 a.m. in the middle of the street suffering from multiple stab wounds in Washington Heights, NBC New York reports. Hines was taken to Harlem Hospital and pronounced dead there.

Her boyfriend, 30-year-old actor and rapper Lamar Davenport, was arrested at the scene and taken to a hospital for a mental evaluation, the news station reported Monday.

1. Her Boyfriend Was Kneeling Over Hines Yelling ‘Get Out Devils’ After the Stabbing, Witnesses Say

Lamar Davenport is accused of killing E’dena Hines, who was his girlfriend. (Facebook)

“Get out devils! I cast you out Devils in the name of Jesus Christ! I cast you out!,” Davenport yelled, a witness, George Hudacko, told the Daily News.

Devenport was taken to the hospital for a mental evaluation. According to the New York Post, the man is Hines’ live-in boyfriend. He has been charged with second-degree murder. 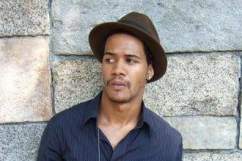 2. Hines Is the Granddaughter of Freeman’s First Wife

Hines with Freeman at the Golden Globes in 2005.(Getty)

E’dena Hines was the granddaughter of Freeman’s first wife, Jeannette Adair Bradshaw, to whom he was married to from 1967 to 1979.

“The world will never know her artistry and talent, and how much she had to offer,” Freeman said in a statement. “Her friends and family were fortunate enough to have known what she meant as a person. Her star will continue to shine bright in our hearts, thoughts and prayers. May she rest in peace.”

3. Freeman & Hines Denied Rumors in 2012 That They Were Dating

Morgan Freeman addressed rumors in 2012 that he was in a romantic relationship with Hines after rumors that they were dating for 10 years and were possibly going to get married had been circulating. They are not related by blood.

“The recent reports of any pending marriage or romantic relationship of me to anyone are defamatory fabrications from the tabloid media designed to sell papers,” Freeman said in a statement at the time, according to TMZ. “What is even more alarming is that these fabrications are now being picked up by the legitimate press as well.”

Hines, then 27, also released a statement, saying the reports were “untrue” and “hurtful” to her and her family.

4. Hines Was Working as an Actress in New York City

Hines had been working as an actress in New York City before her death, according to her website.

The video above shows her playing a receptionist in one of Morgan Freeman’s films, 2014’s 5 Flights Up.

She graduated from New York University’s Tisch School of the Arts with a Master’s of Fine Arts in acting in 2011, according to her LinkedIn page. She completed undergraduate studies at Drew University in 2006, graduating with an English literature degree.

5. She Said Her ‘Dream’ Came True When She Booked a Role in a Movie Last Month

In a recent blog post,(watch it above) said her “dream” came true when she got a role in an independent film that began filming in July.

Hines wrote on her blog that she nearly gave up acting, moving to Memphis, Tennessee, because she felt unfulfilled. Then, in April, she audtioned for the role in Landing Up, and she got the part.

She then moved back to New York City to continue pursuing her dream.

“Now there is an ease with which I approach my work, a sense of comfort instead of fear. Every day that I get to shoot I wake up and put the character of Cece on me the same way I do my shoes. She sits inside my heart until I take off my costume and come home… sometimes she even spends the night cause she’s lonely,” she wrote. “I feel a huge responsibility to her and I also feel well prepared for the challenge.”

Loading more stories
wpDiscuz
12
0
Would love your thoughts, please comment.x
()
x
| Reply
E'dena Hines, the 33-year-old step-granddaughter of actor Morgan Freeman, was stabbed to death in New York City on Sunday. Her boyfriend has been arrested.