A secret ISIS document titled “A Brief History of the Islamic State Caliphate (ISC), The Caliphate According to the Prophet” has been reviewed by U.S. intelligence, which likens it to Hitler’s Mein Kampf.

1. It Was Found in Pakistan’s Tribal Lands

AMI turned over the secret document, which was independently reviewed by USA Today. They write:

AMI obtained the document from a Pakistani citizen with connections inside the Pakistani Taliban and had it independently translated from Urdu by Harvard researcher and translator Mustafa Samdani.

2. It Was Reviewed by U.S. Intelligence Officials

According to AMI, the document was reviewed by three U.S. intelligence officials who acknowledged its credibility due to names and content. AMI writes:

Retired Defense Intelligence Agency Director Lt. Gen. Michael Flynn, who also reviewed the document, said it “represents the Islamic State’s campaign plan and is something, as an intelligence officer, I would not only want to capture, but fully exploit. It lays out their intent, their goals and objectives, a red flag to which we must pay attention.”

According to Israel National News:

The document serves as a Nazi-like recruiting pitch that attempts to unite dozens of factions of the Pakistani and Afghan Taliban into a single army of terror. It includes a never-before-seen history of the Islamic State, details chilling future battle plans and urges al-Qaeda to join Islamic State.

Currently ISIS and the Taliban are warring with each other. Earlier this month, ISIS released a video showing the execution of ten Taliban, describes as “apostates”, by blowing them up with landmines.

According to AMI, the document states the ISIS terrorists are currently planning for an attack on India, which they hope will instigate open warfare with the United States.

A provided excerpt of the text reads:

“Even if the U.S tries to attack with all its allies, which undoubtedly it will, the ummah will be united, resulting in the final battle.”

Ummah is an Arabic word that means the “collective Muslim people” and does not denote race or ethnicity.

According to the unverified translation, ISIS is currently on the sixth phase. 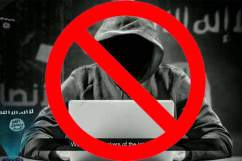 Loading more stories
wpDiscuz
2
0
Would love your thoughts, please comment.x
()
x
| Reply
A secret ISIS document titled "A Brief History of the Islamic State Caliphate (ISC), The Caliphate According to the Prophet" has been reviewed by U.S. intelligence, which likens it to Hitler's "Mein Kampf."