The founder of the militia group that’s patrolling the streets of Ferguson is a Yale graduate who worked for Ron Paul. His name is Stewart Rhodes and the militia group he founded are the Oath Keepers. Since the shooting of unarmed teenager Michael Brown in Ferguson, Missouri, in August 2014 by police officer Darren Wilson, the Keepers have been patrolling the streets of the town. During their watch, multiple people have been injured and innocent people arrested.

1. He Refers to Hillary Clinton as ‘Hitlery’ in His Writings

Rhodes is heavily detailed in a profile at the website for the Southern Poverty Law Center. According to that piece, in April 2008 he wrote in S.W.A.T. Magazine:

Imagine that Herr Hitlery [Hillary Clinton] is sworn in as president in 2009. After a conveniently timed ‘domestic terrorism’ incident (just a coincidence, of course) … she promptly crams a United Nations mandated total ban on the private possession of firearms. …

But Hitlery goes further, proclaiming a national emergency and declaring the entire militia movement (and anyone else Morris Dees labels ‘extremists’) to be ‘enemy combatants.’ … Hitlery declares that such citizens are subject to secret military detention without jury trial, ‘enhanced’ interrogation techniques, and trial before a military tribunal hand-picked by the dominatrix-in-chief herself.

Hitlery then orders police, National Guard troops and active military to go house-to-house to disarm the American people and ‘black-bag’ those on a list of ‘known terrorists,’ with orders to shoot all resisters.

His other writings discuss the collapse of the U.S. economy and America being “on the verge of destruction.”

2. Rhodes is a Yale Law Graduate

According to his Facebook page, Rhodes joined the U.S. Army out of high school but was “disabled in a rough terrain parachuting accident during a night jump.” From there, he attended the University of Nevada where he graduated in 1998. During his time there he was also a certified firearms instructor. Rhodes graduated from Yale Law School in 2004 while winning Yale’s Miller Price for his paper “Solving the Puzzle of Enemy Combatant Status.” After that, he worked for Congressman Ron Paul, supporting the Texans run for president in 2008. Rhodes openly accused Rep. Paul of being the victim of a smear campaign during the primary election.

Protesters trying to drive out Oath Keepers. OKs say "we've got your back" https://t.co/w1CBUEBTdz

Rhodes then formed the Oath Keepers in 2009. He claimed that the group has 30,000 members made up of ex-police and military personnel. The group’s website shows that they “will NOT obey orders to impose martial law or a ‘state of emergency’ on a state.” The Oath Keepers also state, “We will NOT obey any orders which infringe on the right of the people to free speech, to peaceably assemble, and to petition their government for a redress of grievances.”

3. Rhodes Now Lives in Montana Awaiting He & His Followers Last Stand Against the New World Order

Rhodes lives in Kalispell, Montana, with his wife, Tasha, and their kids. He’s been married for 21 years, according to Tasha Rhodes’ Facebook page. At the SPLC’s website, it says that:

In 2010, Rhodes left his Nevada legal practice and moved to Montana, joining a growing Patriot movement presence in the Big Sky state, where antigovernment extremists envision a coming “last stand” confrontation against globalist tyrants expected to steamroll across the U.S., crushing our freedoms.

On his profile at the Oath Keeper site, it says that Rhodes was born and raised in Fresno, California. His family are of Mexican and Apache Indiana descent on one side and “hard working Midwest farmers, horsemen, and GM auto workers on his father’s side,”

A member of the Oath Keepers walks with his personal weapon on the street during protests in Ferguson, Missouri on August 10, 2015. (Getty)

In 2011, Rhodes and his followers went to the town of Quartzsite in Arizona. Their stated goal was to defend a group of residents who had been ejected from a local government meeting on corruption. The SPLC says “Led by Rhodes, the Oath Keepers marched into town and the group’s website called Quartzsite a pivot point for Americans to finally see the looming danger of the “New World Order.”” The movement quickly dissipated with Rhodes being served with a $600 fine for practicing law without a license in Arizona. He had apparently sent letters threatening a lawsuit on behalf of some residents of the town.

5. One of Rhodes’ Followers Was Sentenced to 30 Years in Prison for Raping His Daughter in 2010

Charles Dyer pictured at the time of his arrest in 2010. (Handout)

One of Rhodes’ followers, retired Marine Charles Dyer, was sentenced to 30 years in prison for the rape of his 7-year-old daughter in 2010. In militia circles, he had been known as the “July 4 Patriot.” Despite the conviction, Dyer still has huge support in the libertarian community with a Facebook page claiming he was set up by his ex-wife, Valerie. 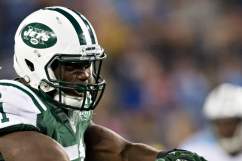 Read More
5 Fast Facts, Breaking News, Ferguson
The founder of the militia group that's patrolling the streets of Ferguson is a Yale graduate who worked for Ron Paul.