So, when is Daylight Saving Time for 2015 (often called Daylight Savings Time) in the USA? On Sunday, November 1, 2015 at 2:00 a.m., set your clocks back one hour … or you could just turn your clocks back before you go to sleep in order to save yourself the hassle. Don’t worry about your cell phones because they reset themselves. If you’re out still partying for Halloween, many bars and restaurants are staying open that extra hour, which means another hour of fun, but you’ll have to check with your local establishments.

Sunrise will now be an hour earlier and Patch.com reports sunset will be at 4:53 p.m. now.

There are several states and areas that do not follow Daylight Saving Time and those include Arizona, Hawaii, Puerto Rico, American Samoa, Guam, the Northern Mariana Islands, and the US Virgin Islands. The state of Arizona (except for the Navajo Nation in the northern part of Arizona), unlike most of the rest of the United States, doesn’t observe Daylight Savings Time, and hasn’t for about 40 years.

So, where does Daylight Saving Time originate from? CNN reported:

The U.S. government started moving into and out of “Daylight Saving Time” during World War I to copy the Germans, who said they were doing it to save fuel. When the war ended, the U.S. government wisely repealed the law since it proved unpopular. During WWII, it came back — again with the notion that it would somehow conserve resources. After the second war, the U.S. converted factories from making bombs to making cars and consumer products. The GIs came home. But Daylight Saving Time just stuck around.

Even so, there are reports that versions of Daylight Saving Time started back in the 1800s:

New Zealander George Vernon Hudson proposed the modern idea of daylight saving in 1895. Germany and Austria-Hungary organized the first implementation, starting on 30 April 1916. Many countries have used it at various times since then, particularly since the energy crisis of the 1970s.

If you go to bed before 2:00 a.m., don’t forget to fix your clocks to avoid confusion when you wake. 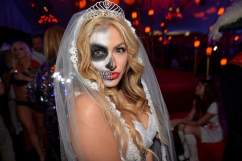 Read More
News
Follow Heavy ↓
What time do we change the clocks change for Daylight Saving Time 2015 in the USA? Read on for all the info on when it starts and ends here, plus 2016 info.