However, Koenig said a life sentence would be unlikely because many of her interviewers viewed five years with the Taliban as punishment enough. Koenig also references a military hearing against Bergdahl in September where Major General Kenneth Dahl “interviewed Bowe for a day and a half and ‘did not find any evidence to corroborate the reporting that Bergdahl was … sympathetic to the Taliban,'” reports CNN.

Major General Dahl said that Bergdahl should not go to jail. When the general court martial was announced, the most serious of military tribunals, Bergdahl said he would not take a plea deal because he wanted a fair chance to tell his story.

The episode then begins.

Afghan former Taliban fighters are photographed holding weapons before they hand them over as part of a government peace and reconciliation process at a ceremony in Jalalabad on February 8, 2015. (Noorullah Shirzada/AFP/Getty Images)

Koenig begins the episode with an interview with “Mujaheed Raman.” Raman said that when they caught Bergdahl he was a “golden chicken” because he was an American soldier captured alive. Despite losing at least 15 fellow Taliban in U.S. raids against them while the army sought Bergdahl, Raman said that Bergdahl was worth losing “more than 5,000 men.”

Pakistani reporter Sami Yousafzai then went about trying to get the Taliban’s story on how they captured Bergdahl. Yousafzai interviewed a Taliban member named Halal, who said that the Taliban were pretending to be police and found Bergdahl near or in a Kochi tent, or a tent of a nomadic desert people similar to African Bedouins. Bergdahl denies anything about a Kochi tent.

Halal said once they captured Bergdahl, he resisted. They brought him back to a Kochi mosque.

Bergdahl told a Taliban that spoke a little English that he was escaping his commanders because they were “disrespectful” or “rude.” During this time, they allegedly took him to a small village on a motorcycle while he was blindfolded. There he said he was stoned by village children.

The Taliban then conspired to take Bergdahl to western Pakistan because it would be harder for American forces to get Bergdahl back there, as Pakistan is a U.S.-ally and a sovereign nation. But because the Taliban knew that Americans assumed that the Taliban would head for Pakistan, they took a circuitous route through the Ghazni Province of Afghanistan, where Mujaheed Raman lives.

Raman told Koenig that in a village in Ghazni a Taliban commander named Qari Ismail Sulaiman Zai took charge of Bergdahl and arranged to have him delivered to the Haqqani network in North Waziristan, Pakistan. The Terrorism Research & Analysis Consortium writes that the “Haqqani network, which has the backing of elements within the Pakistani security establishment, is one of Afghanistan’s most experienced and sophisticated insurgent organizations.”

During this journey, Raman told Koenig that he was held prisoner for two years in Bagram, the largest U.S. airfield in Afghanistan. Because of this, he and the other Taliban wanted to treat Bergdahl better than the Americans had treated him and referred to Bergdahl as his “guests.” They even performed a traditional Afghan dance for Bergdahl called the “attan” while they transferred him to Pakistan.

Bergdahl said he doesn’t recall any of this, especially viewing an attan.

While Bergdahl is on his way to Pakistan, Koenig reports that his platoon was frustrated with his disappearance and that many of them stated that if they found him and thought that he had deserted willingly, they would shoot him.

Meanwhile, a huge search continued for him throughout many of the Afghan provinces. During this time, Raman was picked up and interrogated by American soldiers. He lied and told them that he had not seen Bergdahl.

During this massive search for Bergdahl, Major Mike Waltz and his team of American Green Berets went on many dangerous missions to try to retrieve Bergdahl. Waltz said that the Americans were running around like chickens with their heads off, looking for this one man and always a step behind.

Shane Cross, a soldier from Bergdahl’s platoon who said he was “friendly” Bergdahl, accidentally shot himself in the foot in the weeks looking for Bergdahl. While that was the only physical injury so far, the search was wearing on everyone mentally.

Meanwhile, Bergdahl made it to Pakistan and his image was released in a hostage video by the Taliban. 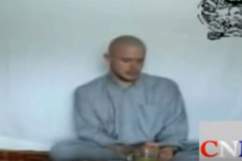 Loading more stories
wpDiscuz
1
0
Would love your thoughts, please comment.x
()
x
| Reply
In the new episode of Serial titled "The Golden Chicken," it is announced that Bowe Bergdahl will go to court martial. Meanwhile, the Taliban sneak him from Afghanistan to Pakistan.