Tonight is President Obama’s final State of the Union Address and the White House has released the following statement about what to expect:

When President Obama took office seven years ago, we were involved in two wars, losing over 800,000 jobs a month, and weathering the worst economic crisis since the Great Depression. But, with his leadership and the determination of the American people, we have made extraordinary progress on the path to a stronger country and a brighter future. We’ve proven that, together, we can overcome great challenges. In his last State of the Union, President Obama will lay out the ways that we, as the American people, can once again come together in pursuit of a country worthy of generations to come.

So, when is the 2016 State of the Union on tonight? Read on for all the best information including live stream details, what channel the address airs on and more.

and FOX Business Live. Click here for all the details on how to watch any and all of the available live streams.

SPEAKER OF THE HOUSE OF REPRESENTATIVES: Paul Ryan

There is always a “designated survivor,” who is a member of the cabinet designated to be at an undisclosed location when he delivers the speech, just in case something happens to the president, vice president and speaker.

President Obama’s presidency is scheduled to end on January 20, 2017. 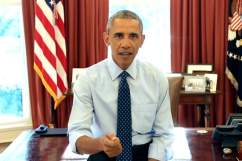 State of the Union 2016 Channel: What TV Station Is the Address On Tonight?

Read More
Barack Obama, President Barack Obama, TV
When is the 2016 State of the Union Address on tonight? What time does it start? We have all those details right here from the date, location and more.