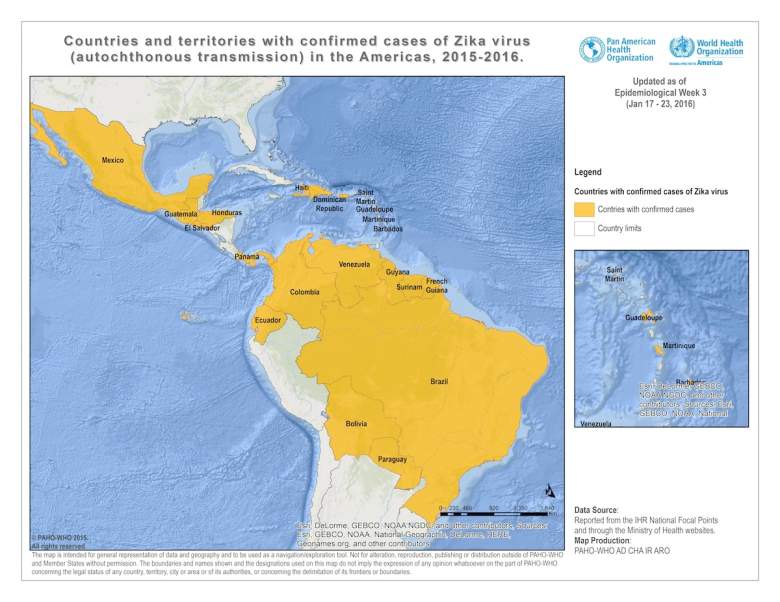 The World Health Organization has warned that the Zika virus, which has been linked to thousands of cases of birth defects in Latin America, is “spreading explosively,” with three to four million infections possible in the Americas next year.

The Zika virus was first detected in the Americas last year. The Pan American Health Organization issued an alert about the first confirmed infection in Brazil, the Centers for Disease Control says. Outbreaks have now been reported in several countries.

The map above, from the World Health Organization, shows where the infection has been found.

Health officials believe the virus will continuing spreading in the Americas, including to the United States. The map below, from the Lancet medical journal, shows the areas at risk of seeing disease transmission:

Here is a map of at-risk area for Zika virus transmission. pic.twitter.com/Nut4twPb5K

Click here to see a larger version of the map above.

Because pregnant women infected with Zika in Brazil and other countries have given birth to children with microcephaly, a brain defect, the CDC is advising pregnant women to consider postponing travel to countries where the infection is circulating.

There has not been a locally transmitted case of the virus in the United States, but cases have been reported in returning travelers. The map below, from the Scientific American, shows cases where someone has returned to the United States with Zika:

How Zika virus gets to US: exclusive interactive map @sciam shows global links of all cases. https://t.co/gvIvqtkAkn pic.twitter.com/os8fUAfcRX

The Lancet medical journal says about the potential spread of the virus:

Zika virus has the potential to rapidly spread across Latin America and the Caribbean. With no vaccine or antiviral therapy available, possible interventions include: personal protection (ie, repellent use) and daytime avoidance of mosquito bites (especially pregnant women until more is known about the association between Zika virus infection and microcephaly); daytime avoidance of mosquito bites among Zika virus-infected individuals to disrupt human to mosquito to human transmission cycles (80% of infected individuals are asymptomatic and the remainder have clinical syndromes overlapping with dengue and chikungunya);5 and community-level mosquito surveillance and control measures. The summer Olympic Games in Brazil in August, 2016, heighten the need for awareness of this emerging virus.

The WHO is convening an International Health Regulations Emergency Committee on the Zirus to determine whether the outbreak constitutes a “public health emergency of international concern.” The committee is meeting February 1 in Geneva.

Read More
Brazil, Breaking News, Health, Zika Virus
wpDiscuz
4
0
Would love your thoughts, please comment.x
()
x
| Reply
The Zika virus is "spreading explosively" in the Americas and has been linked to thousands of birth defects. See a map of the areas affected by the virus here.