The Manhattan District Attorney’s Office has filed its appeal of a New York judge’s ruling that threw out a jury’s conviction against a former Goldman Sachs computer programmer accused of stealing part of the Wall Street bank’s high-speed-trading code before leaving the company.

Sergey Aleynikov, 46, has twice had convictions against him thrown out on appeal, first in federal court and then in state court last year. Prosecutors had given a notice of appeal last July, giving them nine months to file.

District Attorney Cyrus R. Vance Jr.’s office is trying to have two convictions against Aleynikov for unlawful use of secret scientific material reinstated. Judge Daniel P. Conviser threw out the convictions last year, saying prosecutors “did not prove he committed this particular obscure crime.” You can read the judge’s full ruling here.

“To re-prosecute Sergey Aleynikov — who was acquitted of all federal charges after spending a year in prison — was reprehensible; to file this baseless appeal eight months after Mr. Aleynikov was likewise acquitted of all state charges is truly inexcusable,” Kevin Marino, Aleynikov’s attorney, told Heavy.com on Monday. “Is no one watching how Mr. Vance spends the taxpayers’ money?”

Vance’s office says in the brief that “… the jury properly convicted defendant based on legally sufficient evidence that his conduct constituted a violation of Penal Law §165.07. Justice Conviser’s decision to set aside the jury’s sound verdict stemmed from a flawed understanding of the statute and should be reversed.”

You can read the full appeal brief, which was filed Monday, below or by clicking here:

No sensible reading of the word ‘tangible’ supports the trial court’s misguided view that the Unlawful Use statute proscribes only the creation of paper copies of secret scientific material. Even assuming the word is given its narrowest possible definition, ‘perceptible to the touch,’ to the exclusion of all other possible meanings, a digital reproduction of data is no less tangible than a paper copy. Computer code, in its essence, is intellectual property, just like a song or a formula. When intellectual property is written on paper, it is no more ‘perceptible to the touch’ than it is when written onto a hard drive. In neither case can a person ‘touch’ the intellectual property. In both scenarios, however, a person can touch the medium onto which the property is reproduced or recorded. This is true whether information is inscribed on a tablet, written on paper, saved onto a hard drive, or photographed with a digital camera. In each instance, the information is reproduced in a manner that gives it physical existence – in other words, a tangible reproduction or representation.

In its brief, the state argues, “Confusion about this concept tainted the trial court’s analysis, and was responsible, in part, for Justice Conviser’s misguided decision to undo the jury’s verdict. Indeed, the court’s core misunderstanding of the statutory requirement is on full display in its analysis of legal precedent.”

The state also argues, “In short, the evidence was clear that defendant intended to control permanently the use of the code that he reproduced from Goldman’s system. The evidence also explained the motive behind this crime: defendant believed that he could use Goldman’s code to jump-start his own work writing high-frequency trading code for Teza,” the state argued, referring Teza Technologies, a competing trading firm that Aleynikov left Goldman for. He was later suspended and then fired by Teza.

Aleynikov’s attorney has previously called the decision by Vance to file an appeal “inexcusable,” according to the New York Times.

The attorney, Kevin Marino, also told the Times it “was reprehensible” for Vance to charge Aleynikov in the first place.

The legal case against the computer programmer has been ongoing for several years. Aleynikov was first arrested, by the FBI, in 2009. He was found guilty of theft of trade secrets and transportation of stolen property by a federal jury in 2010 and sentenced to 8 years in prison. That conviction was overturned by the Second Circuit in 2012, after Aleynikov had spent a year in prison.

In August 2012, Aleynikov was arrested again, this time on state charges. He was found guilty by a state jury on two of three charges against him, before he successfully appealed for a second time.

If the district attorney’s office’s appeal is successful, the criminal charges would be reinstated. But Vance has said he is not likely to seek prison time for Aleynikov. 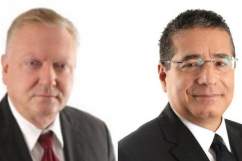