Christina Grimmie was tragically murdered late last night at the Plaza Live in Orlando, Florida. Watch her final performance with the band Before You Exit above. The video begins around the 30-second mark.

The Mirror reports that Grimmie is believed to have been shot twice in the head.

Fans mourned on social media, with comparisons being drawn between Grimmie and Selena on Reddit, a Tejano singer who was murdered in 1995 at the age of 23.

A GoFundMe campaign has been set up by Grimmie’s management team to help her family during this trying time. To donate, click here. 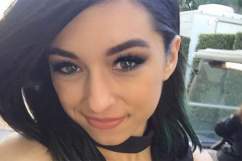