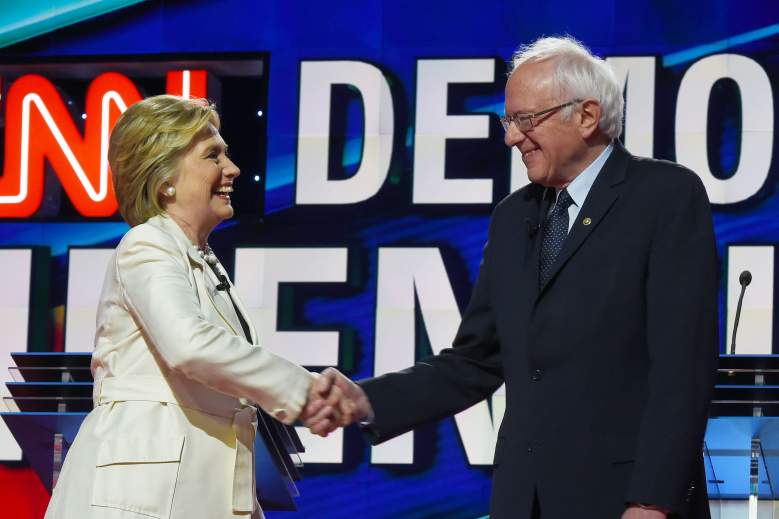 Bernie Sanders vowed again on Saturday to take his campaign to the Democratic National Convention this summer, even as Hillary Clinton moves closer to clinching the party’s presidential nomination.

Sanders is down in delegates with the window of opportunity narrowing in his quest for the Democratic nomination. Still, he has insisted that he will remain in the primary until the convention in July.

According to report, a strong victory in Puerto Rico’s Democratic primary on Sunday and additional support from superdelegates put Clinton over the threshold of 2,383 to become the presumptive nominee.

Sanders’ campaign quickly responded to the report, calling it a “rush to judgment,” and once again declaring to take the fight to the convention in Philadelphia.

The first leg of the 2016 election marathon is nearly over as primaries come to a close tomorrow in California, and five other states.

The numbers are not in Sanders’ favor, with many people wondering if he will fight all the way until the bitter end, and when he will endorse Clinton. While no one can predict Sanders’ next move, here are a few different possible scenarios:

He Drops Out Following Tuesday’s Primaries 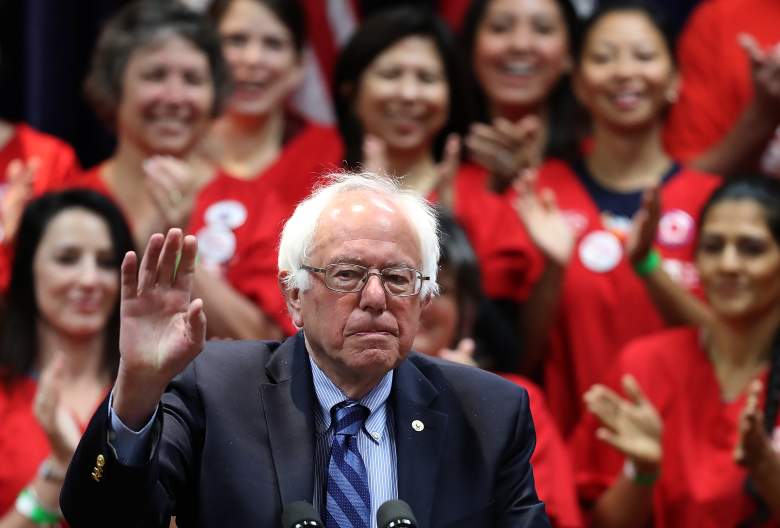 Bernie Sanders has campaigned heavily in California ahead of the state’s Democratic primary on June 7. (Getty)

694 delegates across six states are at stake on Tuesday.

Although Sanders has repeatedly promised to fight on regardless of the outcome, that is often what politicians say up until they drop out. Ted Cruz, who maintained until the final days of his campaign that he’d go all the way to the GOP convention, took the same approach.

Hillary Clinton was at a similar crossroads during her 2008 primary campaign and drew a direct comparison to her and Sanders’ position during a recent news conference.

Clinton recounted that she folded her campaign and backed Barack Obama, strongly hinting that it’s time for Sanders to do the same.

“Tomorrow is eight years to the day after I withdrew and endorsed then-senator Obama,” she said. “I believed it was the right thing to do. No matter what differences we had in our long campaign, they paled in comparison to the differences we had with the Republicans.”

According to CNN, when asked how she could change Sanders’ mind about fighting up to the convention, Clinton said she would wait until the outcome of Tuesday’s primaries.

“I certainly am going be reaching out to Senator Sanders and hope he will join me in that because we have got to be unified going into the convention and coming out of the convention to take on Donald Trump.”

There is mounting pressure on Sanders to drop out in an effort to unify the Democratic party against Trump.

According to CNN, Clinton’s campaign is planning a major push to unify the party behind her candidacy, including endorsements from President Obama and Vice President Joe Biden which could happen as early as this week.

One option for Sanders is to drop out immediately and urge his supporters to join with Clinton to unite Democrats in the fight against Trump.

He Waits, but Concedes & Endorses Clinton Before the Convention 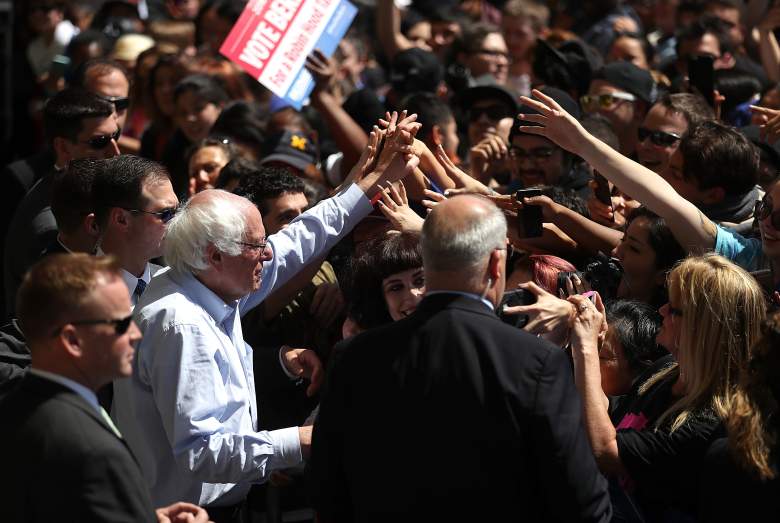 Sanders vowed as recently as Saturday to contest the Democratic convention, however he is facing increasing pressure from party leaders to concede before July. (Getty)

On Monday, Sanders was less emphatic about his plans after Tuesday’s primaries than he was over the weekend, according to The Wall Street Journal.

In a news conference he declined to answer whether he would consider endorsing Clinton before the July convention if he does not win the California primary.

“You’re asking me to speculate,” he said. “Let me talk to you after the primary in California. Let’s assess where we are after tomorrow before we make statements based on speculation.”

Sanders has received about 3 million fewer votes than Clinton and has consistently fallen behind her in national polls of Democratic primary voters. If he waits until the convention, he would be asking the Democratic Party to overturn the will of the people.

A strange request from any candidate, but especially for Sanders, an anti-establishment insurgent who has been campaigning to “restore Democracy.”

Sanders may not drop out right away, but that doesn’t mean he’ll fight to the end. He may wait to concede until he has more leverage to make policy demands.

Sanders has previously said that if he loses the Democratic nomination, he will help Clinton fight against Republicans, under certain conditions.

“If I can’t make it — and we’re going to try as hard as we can until the last vote is cast — we want to completely revitalize the Democratic Party and make it a party of the people rather than one of large campaign contributors,” Sanders said in an interview on the progressive Web show “The Young Turks.”

If Sanders does concede the race before July, he will likely push his delegates to fight for specific platform points and rule changes at the convention.

He Goes All the Way to the Convention in July 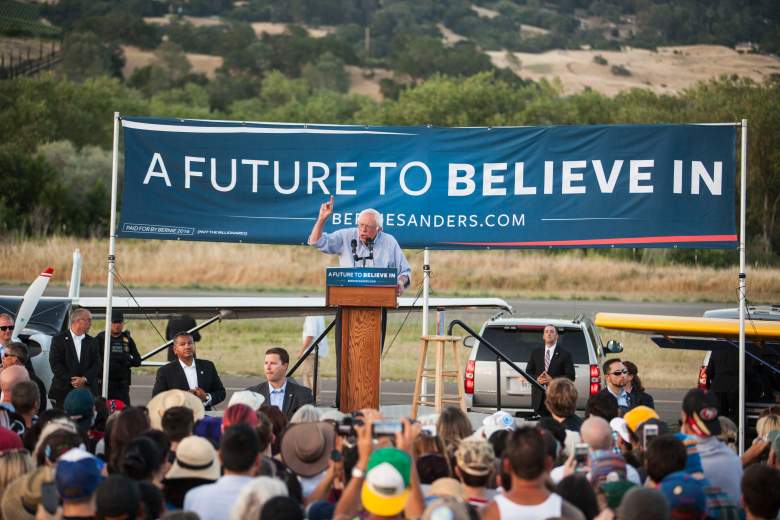 Sanders has continuously promised to give every voter a chance to weigh in, meaning he will compete in Washington, D.C.’s June 14 primary. (Getty)

Sanders’ strategy requires persuading Democratic superdelegates — party officials who can vote however they choose at next month’s convention — to vote for him instead of Clinton.

However, much of Sanders’ plan relies on the voters of California.

Sanders is hoping that defeating Clinton in the most populous state on Tuesday would help convince superdelegates that he is the stronger candidate to take on Donald Trump, the presumptive Republican nominee.

A high number of superdelegates would need to switch allegiances for Sanders to catch up to Clinton. While not impossible, the likelihood of that happening is against the odds.

Clinton holds a substantial lead over Sanders both in pledged delegates and superdelegates.

Despite the mathematical challenge, Sanders indicated that he would battle for superdelegates all the way to the convention in a news conference in California on Saturday.

“The Democratic National Convention will be a contested convention,” he told reporters.

If Sanders sticks with this plan, he won’t be endorsing Clinton any time before July. 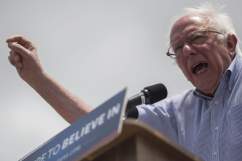 POLL: Should Bernie Sanders Drop Out of the Race?

Loading more stories
wpDiscuz
2
0
Would love your thoughts, please comment.x
()
x
| Reply
Bernie Sanders has repeatedly vowed to continue his fight for the Democratic nomination until the convention. But could the outcome of Tuesday's primaries change that plan? We explore a few possibilities for Sanders' next move.