What time does Juno arrive at Jupiter? (NASA)

After launching in 2011, NASA’s Juno spacecraft is finally going to arrive at Jupiter and enter orbit around the mysterious planet. The event won’t actually be happening until later this evening, and you can watch it live at our link here. We have the schedule of events below for the Juno spacecraft, so you can know exactly what is happening and when.

Although broadcasts for Juno will start earlier, the big moment for the Juno spacecraft will be happening at approximately 11:18 p.m. Eastern, when Juno’s 35-minute main engine burn to enter Jupiter’s orbit begins. The capture into orbit is expected to happen at 11:38 p.m. Eastern.

Here’s the exact schedule, as shared on Planetary Society by Emily Lakdawalla. All times are Eastern:

Lakdawalla, who provided the schedule above via Planetary Society, will also be on Twitter live tweeting the event at this link.

Learn a little bit more about what Juno will be exploring here: 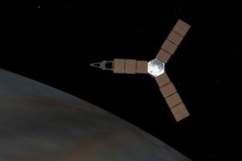 Read More
Breaking News, NASA, Space
What time does the Juno mission enter orbit around Jupiter? When does the NASA craft arrive and when is orbit insertion? See the entire schedule here.