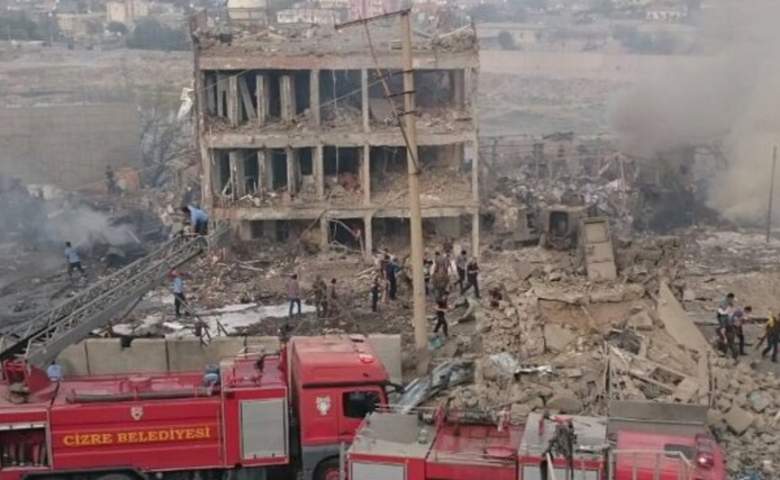 The scene of the Turkey police building explosion. (Twitter/@taylieli)

An explosion demolished a police building in Cizre, Turkey with reports of many casualties as social media users circulated dramatic photos of the attack’s aftermath.

Early reports by Reuters, citing hospital sources, said nine were dead and 64 injured. Others said eight were killed and 45 injured. State media in Turkey reported that a gun battle erupted after the explosion, according to social media reports.

Although blame was not officially assigned, state-run television and security sources were blaming the rebel group PKK, not ISIS.

On Twitter, some posted expletives for the assailants. Others insisted they would not be able to divide Turkey. Some posted videos:

Many ambulances have been sent to the scene #Cizre #TwitterKurds

The BBC says the blast was caused by a car bomb and that photos posted on social media show a leveled building. One Twitter user posted several photos from the scene.

?New photos from #Cizre police HQ, with reports of many casualties. pic.twitter.com/XE3gTliuaN

The BBC says the Turkish city has been subjected to curfews.

Some reports said the car bomb had targeted police headquarters in the city.

The Guardian Australia said that many were feared dead in the August 26 blast. However, much was still unknown about the explosion, including how many were killed, who perpetrated the attack, and how many were injured.

The Australian publication said the attack might be the work of Kurdistan militants, writing, “Militants of the Kurdistan Workers’ party, or PKK, have carried out a string of car bomb attacks on police and military in recent months.” Responsibility was still uncertain, though.

According to Reuters, PKK “is listed as a terrorist organization by Turkey, the United States and the European Union. More than 40,000 people, mostly Kurds, have died since the rebels took up arms in 1984.” A previous ceasefire fell apart, Reuters said.

One report said the building was “totally destroyed.”

The explosion occurred in an area of Turkey near the Syrian border.

Reports said two helicopters and 12 ambulances responded to the scene of the blast.

Read More
Breaking News, Terrorism, Turkey
A police building was blown up by a car bomb in Cizre, Turkey. Learn more about the cause.