Darlene Horton in a photo released by the London Metropolitan Police.

An American woman was killed in a stabbing attack in London that authorities say doesn’t have any links to terrorism. Authorities in England say that a Norweigan-Somali man named Zakaria Bulhan attacked and killed Darlene Horton with a knife on the night of August 3. In total, six people were stabbed with Horton being the only fatal victim. Police are looking into mental health as being the main contributing factor.

Darlene Horton was 64 years old. Her death was confirmed in a press release from the London Metropolitan Police. The statement says that authorities are in contact with her family in the U.S. An post-mortem will take place on August 5.

One witness, a Brazilian man named Fernando, told Sky News, that Horton “had her head in a Spanish woman’s lap, the lady, who was trying to keep her alive by talking to her… The lady from the Spanish family told me that the guy had passed by, running, stabbing people.” 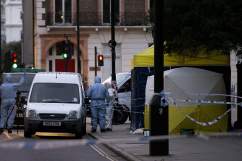 2. Her Husband Is a Florida State University Professor Who Was in London for the Summer

So sad to hear that Darlene Horton, the wife of psychology professor Richard Wagner, was killed in London.

The Tallahassee Democrat reports that Horton was in London with her husband, Florida State University professor Richard Wagner. He is in the English capital on a summer study program. The couple were due to return to the U.S. on August 4, the day after the attack.

In a statement after the attack, Florida State University President John Thrasher said:

There are no words to express our heartache over this terrible tragedy. We are shocked that such senseless violence has touched our own FSU family, and we will do all we can to assist Professor Wagner and his loved ones, as well as his friends and colleagues in the Psychology department, as they mourn.

Horton was an avid tennis player. While Richard Wagner is considered a “pioneer” in dyslexia research.

3. Another American Person Was Wounded in the Attack

The non-fatal victims of the attack were two women and three men, comprised of American, English, Israeli and Australian citizens. Sky News reports that two of the victims remain in a nearby hospital in non-life threatening condition. Fernando told the network that he saw a man of about 45 with a stab wound in his side and a woman in her 20s with a wound in her arm.

Israeli victim Yovel Levkowski, 18, was slashed in the arm and hand during the attack, reports the Daily Mirror. The tabloid adds that Levkowski was inadvertently tried to help Bulhan because she thought he was trying to escape the attack.

4. Bulhan Was Taken Down by a Police Taser

Speaking to the media the day after the attack, Metropolitan Police Assistant Commissioner Mark Rowley, told the media:

Whilst the investigation is not yet complete, all of the work we have done so far increasingly points to this tragic incident having been triggered by mental health issues.

Rowley added that he believed the stabbing was a “spontaneous attack and the victims were selected at random.” Sky News reports that the suspect was taken down by a police taser before being arrested. The network says this happened around six minutes after officers were first called to the scene after reports of a stabbing.

Rowley said that Bulhan lives in south London and that investigators have “so far we have found no evidence of radicalisation,” following interviews with his family.

While Mayor of London Sadiq Khan said, “I urge all Londoners to remain calm and vigilant. Please report anything suspicious to the police. We all have a vital role to play as eyes and ears for our police and security services and in helping to ensure London is protected.”

The Daily Mirror reports that Bulhan first came to the United Kingdom in 2002.

5. Knife Crime Continues to be a Major Problem in London

In the aftermath of the attack, British media consultant Jamie Wood tweeted that there had been 9,000 knife crimes in London in the last 12 months. In total, 12 teenagers were killed.

On the day of the attack, the BBC reported that knife crime had decreased since the advent of stop and search tactics by the London police. Though Russia Today reports that in 2016, crime is on a steady rise in the English capital.

Loading more stories
wpDiscuz
16
0
Would love your thoughts, please comment.x
()
x
| Reply
An American woman was killed in a stabbing attack in London that authorities say doesn't have any links to terrorism.