A screenshot of Shawn Lucas serving the DNC with the fraud lawsuit. (YouTube/Ricardo Villalba)

Conspiracy theories surround the sudden August death of a man who helped serve the Democratic National Committee with a lawsuit alleging fraud in the presidential race.

Shawn Lucas died on Aug. 2, 2016, confirmed the Washington D.C. medical examiner, but the circumstances of his death remained very foggy until November 1.

According to the Office of Chief Medical Examiner of Washington D.C., this is the cause and manner of Shawn Lucas’ death. The office released the information to Heavy on November 1:

In contrast to Rich, there was no public evidence that Lucas died suspiciously, however.

1. Lucas Is Seen in a Video That Shows Him Serving The DNC With Papers in The Fraud Lawsuit

The lawsuit was filed on June 28 by Bernie Sanders supporters against the DNC and then DNC chairwoman Debbie Wasserman Schultz, who resigned in the wake of the WikiLeaks email scandal.

The lawsuit filed by “a group made up predominantly of Bernie Sanders supporters” alleges Wasserman Schultz “rigged the primary for Hillary Clinton,” says UPI.

The group of 120 people says in the lawsuit “that Wasserman Schultz and the DNC were fraudulent, negligent and misrepresented their true motivations in the Democratic presidential primary,” said UPI, adding that internal email and memos were cited in the lawsuit.

Snopes says Lucas was just one of the process servers in the DNC lawsuit.

2. Lucas Was Found Dead in a Bathroom

Fueling rumors, authorities did not say how Lucas died until November 1.

Asked whether the death was being investigated as suspicious in any manner, the Washington D.C. Police Department’s media office would only provide Heavy with a one-page incident report that says Lucas was found unconscious in a bathroom at home by his girlfriend, Savannah King (see above).

The D.C. medical examiner’s office, by law, does not release more information to the public beyond cause of death.

Read more about Lucas’ cause of death here:

3. A Fundraising Site Was Set Up After Lucas’ Death in His Honor

The Go Fund Me site created by a friend confirms that Lucas died on Aug. 2. It says, “The world lost an incredible man who made everyone around him better. On August 2nd, 2016 Shawn Lucas was unexpectedly taken from us. He was a brother, a son, a friend, a best friend, a beautiful heart.…Trying to describe him in words is a difficult task, because he was so many things to so many people.”

The site said that Shawn “wasn’t like anyone you would ever meet or forget. He was someone you remember after only meeting once, someone who you want to have with you at every occasion because he just made it better. He brought light to every room, every situation, and always had a handful of witty comments no-one else could say more perfectly or think of on the spot and have ready at the tip of his tongue. Everyone has their own connection and closeness to Shawn, he was a friend to the universe and such a joy to be around. The sense of loss and thought of him not being here is overwhelmingly painful. It cuts the DC city deep.”

Heavy has written to the site’s creator seeking more information on Lucas’ death.

The site says that Shawn Lucas is survived by his loving partner Savannah King, his brother Justin Lucas, his father William Lucas, and his mother Susan Lucas.

Shawn’s brother also wrote on the fundraising site. “You may know him as Astro or MCSL, but to me, he was the coolest damn brother to walk the earth! He always followed his heart and lived life on the edge. When he was 18 he wanted to go snowboarding, so he moved to Colorado. When he was 28, he wanted to learn Jiu Jitsu, so he went to Brazil for three months (three separate times).”

The brother continued, “He wanted to create music, so he wrote and produced two hip hop albums. If you had the pleasure of meeting him, there is no doubt he had an impact on your life. He helped raise me and I wouldn’t be who I am or where I am without him. The world just lost a bad ass mo fo and I just lost my big brother. RIP Shawn. I miss you.”

4. Lucas’ Name Was Mentioned in a July Motion The DNC Filed in The Fraud Cause

A screenshot of Lucas serving the DNC with the fraud lawsuit. (YouTube/Ricardo Villalba)

Lucas’ name comes up in the motion the DNC filed in July in the fraud lawsuit.

It says, in part, “On July 6, 2016, Plaintiffs filed affidavits of service of process, in which Shawn Lucas and Brandon Yoshimura of One Source Process, Inc. claim to have served Rebecca Christopher (described by the affidavits as a ‘Creative Strategist’) with process for both the DNC and its chair at 1:30 p.m. on July 1st…”

5. Lucas’ Name Is Mentioned By Conspiracy Theorists in Connection With The Murder of DNC Analyst Seth Rich

Rich was a data analyst for the DNC, who was found murdered in early July when he was gunned down on a Washington D.C. street. The murder remains unsolved.

Conspiracy theorists have floated the theory that Rich could have been behind the WikiLeaks’ document dump. Although WikiLeaks won’t release its source, WikiLeaks did offer on Aug. 9. a $20,000 reward for information leading to a conviction in the Rich case.

However, WikiLeaks’ founder Julian Assange gave cryptic comments about Rich to Dutch television on Aug. 8, in which he would not confirm or deny whether Rich was a WikiLeaks’ source (as standard practice, though, WikiLeaks does not discuss its sources).

Although conspiracy theorists are trying to link Lucas’ death with that of Rich (and others), they offer no evidence to back up their contention that foul play was involved in Lucas’ case or that Hillary Clinton was in any way tied to it. U.S. officials and data experts have said they think Russian intelligence agents might be behind the email leak by WikiLeaks, which denies ties to the Russians. 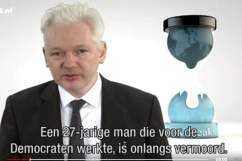