A veteran Washington D.C. Metro Transit officer is accused of trying to help ISIS in a complaint that also says he dressed up as a Nazi.

The criminal complaint also accuses Nicholas Young, 36, a U.S. Citizen from Fairfax, Virginia, of once dressing up as “Jihadi John” for Halloween in a costume that included a headless hostage. The criminal complaint said that Young claimed he “dressed up as a Nazi” and “collects Nazi memorabilia” and showed a “tattoo of a German eagle on his neck.”

The Washington Post says Young, 36, of Fairfax, Virginia, was “charged with attempting to provide material support to the Islamic State.” The criminal complaint obtained by Heavy alleges in extensive detail how authorities believe Young was stockpiling weapons, trying to help ISIS, and providing information about law enforcement techniques to a man he thought was trying to reach ISIS.

WBT said a source emphasized there was “no pending threat to the DC transportation system.” The Washington Post says that Young told authorities he once traveled to Libya to help fight against Muammar Gaddafi.

“This investigation began with concerns that were reported by the Metro Transit Police Department, and it reinforces that, as citizens, we all have a duty to report suspicious activity whenever and wherever it occurs,” Metro Transit Police Chief Ron Pavlik said in a statement the office released to Heavy.

1. The Officer Is Accused of Trying to Help ISIS Communicate Secretly & Associating With Other Accused Terrorists

According to ABC News, the officer “allegedly purchased technology-related items” so that ISIS could more easily “evade” authorities when communicating.

The U.S. Attorney’s release says that, on July 18, 2016, “Young communicated with whom he believed to be CHS regarding purchasing of gift cards for mobile messaging accounts ISIL uses in recruiting.”

On July 28, 2016, the release says, authorities believe “Young sent 22 sixteen digit gift card codes to the FBI undercover with a message that stated: ‘Respond to verify receipt . . . may not answer depending on when as this device will be destroyed after all are sent to prevent the data being possibly seen on this end in the case of something unfortunate.'”

The codes were ultimately redeemed by the FBI for $245, said the release.

Federal officials also contend that Young associated with a man who wanted to blow up the U.S. Capitol. “Several meetings Young had with an undercover law enforcement officer in 2011 included another of Young’s acquaintances, Amine El Khalifi, who later pleaded guilty to charges relating to attempting a suicide bombing at the U.S. Capitol Building in 2012,” said the release.

The release says that authorities also believe Young was an acquaintance of “Zachary Chesser, who…pleaded guilty to providing material support to terrorists.” According to CNN, Chesser was accused of posting online threats against the “South Park” creators.

FBI agents interviewed Young when Chesser was arrested in 2010 and “Young said he was shocked by the charges. Young said it would be Young’s religious and personal duty to tell someone if Young became aware of terrorist activity,” the criminal complaint says. 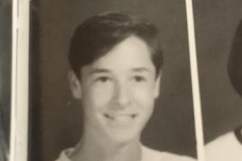 2. The Officer Lives in Virginia & Has Worked For the Transit Police For Years

The officer worked for the transit police in DC for 12 years and lives in a Virginia suburb, said ABC. The Washington Post says his employment has been terminated and that an indictment was filed against him in Alexandria, Virginia.

“Since I received my first briefing on this matter, Chief Pavlik and I have worked hand-in-glove with the FBI in the interest of public safety and to ensure that this individual would be brought to justice,” said Metro General Manager/CEO Paul J. Wiedefeld, in a statement released to Heavy.

“Metro Transit Police alerted the FBI about this individual and then worked with our federal partners throughout the investigation up to and including today’s arrest. Obviously, the allegations in this case are profoundly disturbing. They’re disturbing to me, and they’re disturbing to everyone who wears the uniform.”

The complaint said that the FBI created a scheme through which Young thought he was helping a man reach ISIS as a fighter. In one communication, the complaint said, Young “proudly referenced the murders of the staff at the Charlie Hebdo magazine in France” shortly after they happened and said, among other things, “May Allah make it easy on you…a couple brothers…were named in an assault on a French newspaper…Hopefully now people understand there are some lines you don’t cross.”

3. The Officer Was Caught in an FBI Sting & Was Being Monitored ‘Regularly,’ Reports Say

Although the officer thought he was talking to ISIS operatives, he was really communicating with agents from the Federal Bureau of Investigation, which was conducting an undercover operation into him, ABC says.

The investigation launched three years ago after the Metro Transit office “went to the FBI with concerns,” Metro Transit Police Chief Pavlik said in a statement, according to The Washington Post. After that point, the FBI, working in conjunction with Metro police, started monitoring Young “regularly,” The Post said.

The complaint says that Young said that he was “wary of surveillance” and frequently removed his cell phone battery when he goes somewhere to talk. He told an undercover law enforcement officer that he had aimed an AK-47 out the window of his residence when he was “scanning for what he believed was law enforcement surveillance,” said the complaint.

4. The Officer Went to Libya to Help Fight Against Muammar Gaddafi, Reports Say

The Washington Post says that Young was interested in “activity abroad” and says the indictment says Young told law enforcement that “he had traveled to Libya twice in 2011 to fight against the late Muammar Gaddafi. He gave a person working with law enforcement advice on how to travel to Syria.”

More than 100 Americans have been accused of trying to help ISIS over the years, says ABC.

Concerns about homegrown ISIS terrorism have increased since the Orlando night club mass shooting and the San Bernardino terrorist attack, both cases in which the attackers may have been influenced from ISIS but were already living in America. Young’s background is still unknown.

5. The Officer Was Arrested on Wednesday Morning at Transit HQ & Was Already In Court

NBC News says Young was arrested at transit system headquarters without incident and is due to appear in federal court later in the day of Aug. 3.

According to WBT, the transit officer was arrested the morning of Aug. 3. The Washington Metropolitan Area Transit Authority (Metro) was created in 1967 to “plan, develop, build, finance, and operate a balanced regional transportation system in the national capital area,” its website says.

It runs Metrorail, which serves 91 stations and has 117 miles of track, Metrobus, which has 1,500 buses in Washington D.C., and also runs a paratransit service, MetroAccess, says the website.

The criminal complaint said that Young told the undercover officer that if anyone betrayed him that “person’s life expectancy would be greatly diminished” and “that person’s head would be in a cinder block at the bottom of Lake Braddock.” He also said, in a discussion about FBI surveillance, that “we” should “pour gasoline on their cars and light them,” the complaint said.