Dahir Adan – a recent Minnesota college student and Somali immigrant born in Kenya – was identified by Minnesota media as the man who randomly stabbed nine people in a St. Cloud mall while referring to Allah.

The Minneapolis Star Tribune said Adan’s father had identified him as the suspect and added that authorities executed search warrants at an apartment where Adan lived with his father. However, authorities have yet to formally identify the mall suspect. The St. Cloud Times said that Somali community members also ID’d the mall suspect as Adan.

ISIS has claimed responsibility for the attack. Adan was a member of Minnesota’s Somali refugee community, the nation’s largest. The FBI is calling the Minnesota stabbings a possible “act of terrorism,” according to The Associated Press.

The victims between the ages of were stabbed – none with life-threatening injuries – around 8 p.m., as the nation was focused on the explosion in Manhattan that injured 29, one seriously. Authorities say they do not have evidence that the attacks are related.

Jason Falconer, an off-duty police officer who is a concealed carry advocate and firearms trainer, shot and killed the suspect in the mall.

1. ISIS Has Released a Statement Referring to the Mass Stabber as a ‘Soldier’ of the Islamic State

The news release came from the Amaq news agency on Sunday morning. “The executor of the stabbing attacks in Minnesota yesterday was a soldier of the Islamic State and carried out the operation in response to calls to target the citizens of countries belonging to the crusader coalition,” said the statement by Amaq Agency, the news agency for ISIS.

The victims of the stabbing all suffered non life threatening injuries. The AP said that the FBI is studying Adan’s background to learn more about his motivation.

However, authorities said they were considering the Minnesota stabbings a terrorist act. “We are currently investigating this as a potential act of terrorism,” Richard Thornton, of the FBI, said in a news conference on the afternoon of September 18.

The Somali museum of Minnesota says the state is home to the United States’ largest Somali diaspora. In July three Somali immigrants were convicted in Minnesota of plotting to join ISIS, says MPRNews. Yahoo News says nine Minnesota Somalis overall have been accused of plotting to join the Islamic State since 2014; Donald Trump previously provoked criticism on the campaign trail when he quoted a Washington Times article that had called Minnesota a rich recruiting pool for ISIS due to its levels of Somali immigration, with some 30,000 Somali refugees. 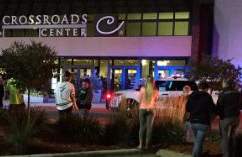 2. The Stabber Referenced Allah & Asked at Least One Victim if He Was Muslim, the Police Chief Says

Police Chief William Blair Anderson said in a midnight press conference that at least one victim told police the stabber asked if he was Muslim before stabbing him.

Anderson said the suspect also referred to Allah, although he did not say specifically what the stabber said. Adan’s father, Ahmed Adan, told The Minneapolis Star-Tribune that Dahir Adan “was born in Africa and had lived in the United States for 15 years.” According to the Washington Post, “Adan moved with his family from Kenya to the United States at age 2 and grew up in St. Cloud.”

The St. Cloud Times newspaper said Adan’s family last saw him about 2 to one and a half hours before the attack, when he said he “was going to the mall to buy an iPhone 7.”

3. Adan Was a College Junior Who Worked as a Private Security Officer, Somali Community Leaders Say

Community leader Abdul Kulane said the suspect did not have a violent history and described him as “a smart, accomplished student at Apollo High School. He was a junior at St. Cloud State University” who worked as a part-time private security officer, said the St. Cloud Times. The Minneapolis Star-Tribune said Adan was 22-years-old and a student at St. Cloud Technical and Community College.

However, according to ABC News, the latter college says Adan was never a student there but St. Cloud State University “confirms he attended school there, but has not been enrolled since spring 2016.” ABC said Adan’s father identified him to the news media as the stabber. St. Cloud Technical and Community College’s marketing director told Heavy, “We have confirmed that Dahir Adan has never been a student at St. Cloud Technical and Community College.”

Reports hit social media fast of people screaming and running from the mall. KARE 11 said people with blood on them were seen walking through the mall.

However, police then locked the remaining people into the mall for hours, updating them periodically, a scene captured on videos posted to You Tube.

4. The Suspect Was Known to St. Cloud Police & Had Only Minor Contact With Them

The police chief said the stabber had at least three contacts with St. Cloud police, but they were only for minor traffic infractions.

According to the AP, three college freshmen in the mall said they “saw two bloodied men stumble from a hallway” and one woman at the mall reported hearing a screen and then saw “a man who looked like a security guard sprint down a hallway, and then two men stumbled out.” The men had blood on their face and back, the AP said.

5. The Mall Stabber Was Shot & Killed by an Off-Duty Police Officer

The caption for this photo on Tactical Advantage’s website reads, “#TBT Jason Falconer and Ted Boran with J.J. Racaza of Team Caracal at last years SHOT Show.
We are gearing up for the 2014 show, coming up on the 14th!” (Facebook/Tactical Advantage)

Initial reports had said there might be an active shooter inside the mall, but it later turned out that the suspect was the only person shot; an off-duty police officer shot the suspect, according to the police chief.

That officer, Jason Falconer, was heralded as a hero. He is a former police chief and current off-duty cop who owns a gun range and company called Tactical Advantages. His company biography says Falconer’s “goal is to teach individuals the mindset, knowledge and skills needed to be successful with firearms in order to secure their personal safety or that of their family, at home or in public.”

The stabber was armed only with a knife, the chief said. You can read more about Falconer and his confrontation with Adan in the mall here: