Dr. Jill Stein, the presidential nominee for the Green party, shared some insightful and no-holds-barred live tweets during the first presidential debate. Stein provided her own livestreamed answers to every question asked during the debate, with tweets to accompany her responses. The debate would have been completely different and quite compelling if Stein had been allowed to participate. This is what bothers many of her supporters the most: if only more people could hear Stein speak and share her plans for the presidency, they might turn from supporting Trump or Clinton and instead vote for Stein.

When Donald Trump was discussing the 33,000 emails of Hillary Clinton’s that haven’t yet been seen, Stein tweeted:

What was in #HillarysEmails? Do they have information about deals w/ repressive Mideast regimes or selling U.S. uranium to Russia? #debates

Instead of arguing about who's the bigger crook, @HillaryClinton & @realDonaldTrump both need to level with the American people. #debates

She then addressed just some of the issues she has with both candidates. She doesn’t think either candidate is a good choice for America.

She spoke out against Trump’s support of New York’s former stop-and-frisk policy, which was highly controversial:

And she addressed income inequality:

African Americans have 5 cents on the dollar in wealth compared to whites. This is unconscionable. #debates pic.twitter.com/m4EYOUmfcV

While Trump and Clinton spoke about reform in prisons, Stein had another idea:

She also called out the candidates for discussing the birther issue at all:

It's telling that the #birther issue is a topic during the #debates. Don't the American people care more about jobs, healthcare & justice?

While both Clinton and Trump talked about the environment, Stein had a word for the candidates:

Trump promotes coal, while Clinton promoted fracking around the world as SoS. Neither will solve #ClimateChange. #OccupyTheDebates #debates

The bottom line, she emphasized: neither one will help the environment.

We need to make sure police forces look like their communities so that there is a common connection between them. #debates #OccupyTheDebates

She also addressed the cyberwarfare question. In the past, Stein has said she would pardon Edward Snowden and put him on her cabinet:

We need an international treaty to prevent cyberwarfare. The Chinese are willing to join us on this. #debates pic.twitter.com/WhL89FQoc3

They talked about destroying ISIS, but Stein had harsh words about the candidates’ ideas and both parties’ tactics:

"Knocking the hell out of" terrorists has been very successful… at creating the next generation of them. #debates pic.twitter.com/bnkmCpmMT9

As they talked about policing the world and the United States’ foreign policy, Stein addressed the country’s habit of supplying weapons to the Middle East:

The U.S. is the major supplier of weapons to all sides in the Mideast and around the world. #debates pic.twitter.com/UqcyO4SUCW

Stein had some unique views on the questions asked in the debate, and she was able to often turn the questions around to point to the real issues. The debates would have been very different, and quite fascinating, if Stein had been allowed to take part in them. She’s still pushing to be allowed in a future debate. 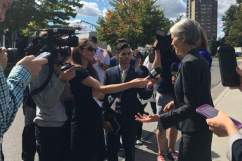 Jill Stein: ‘I Won’t Be Silenced’ After Police Escort Her Off Hofstra Campus