The election results in all three states were very close, although Donald Trump leads in all three states (Michigan is still so tight that the Associated Press has not formally called it, but Trump was declared victor in Wisconsin and Pennsylvania). That propelled Trump to an Electoral College victory over Democrat Hillary Clinton (were Clinton to have won all three states, she would be president.)

The Stein efforts come on the heels of a group of professors and lawyers urging the Clinton campaign to seek recounts in those three states after uncovering what they claim are anomalies in the Wisconsin returns. However, other data experts have said any anomalies can be explained by demographic variables and have ridiculed the accusations.

Some thought the Stein fundraising was wrong – or even a scam – because of how difficult it would be to overturn the results.

#Recount2016 is unlikely to change the result. I think it's dishonest of Jill Stein to ask 2.5 million for it. It's like burning money.

@MMBinNC don't forget how much you hated Jill Stein like 2 weeks ago? LOL You just bankrolled her 2020 campaign

The article reported that a group of data experts and lawyers “which includes voting-rights attorney John Bonifaz and J. Alex Halderman, the director of the University of Michigan Center for Computer Security and Society, believes they’ve found persuasive evidence that results in Wisconsin, Michigan, and Pennsylvania may have been manipulated or hacked.” Halderman then wrote a detailed explanation of his theories on Medium.com.

The group’s central theory is that a foreign government could have hacked the election because of what they argue are suspicious patterns in voting results in Wisconsin (which other data experts say can be explained away by education and race variables). The Clinton campaign and various intelligence agencies have accused the Russian government of staging a series of hacks that hurt Clinton’s chances during the campaign, including hacking into the emails of her campaign chairman, John Podesta. The group seeking the recount has not proven any election hacking or manipulation.

In a statement, Stein said, “After a divisive and painful presidential race, reported hacks into voter and party databases and individual email accounts are causing many Americans to wonder if our election results are reliable.”

Twitter was burning up with news of the Stein efforts. Some found the fundraising ironic because they believe Stein and other third-party candidates cost Clinton the election. Indeed, Stein received more votes in Michigan and Wisconsin than Trump’s margin of victory.

Others raised the difficulty of the task; the results would need to be overturned in all three states for Clinton to prevail.

@realdonaldtrump what is going on with Jill Stein demanding a recount in three states. Can you stop this nonsense?

Irrational people give Jill Stein money for this thinking it will change things. Rational people know it is a waste of money #Recount2016

Reasons to be thankful: 1. Jill Stein

Just donated to my first political cause: Jill Stein's recount fund. Not because I think it was hacked, but because accountability is good.

On the crowdfunding website, Stein wrote on November 23 that Wisconsin’s recount had now been funded (the deadline for a recount request is November 25), but more money was needed to fund recounts for Michigan and Pennsylvania. The Stein fundraising site says:

Congratulations on meeting the recount costs for Wisconsin. Raising money to pay for the first round so quickly is a miraculous feat and a tribute to the power of grassroots organizing.

Now that we have nearly completed funding Wisconsin’s recount (which is due on Friday), we can begin to tackle the funding for Michigan’s recount (due Monday) and Pennsylvania’s recount (due Wednesday). The breakdown of these costs is described below.

On November 23, the Stein/Baraka Green Party Campaign launched an effort to ensure the integrity of our elections. With your help, we are raising money to demand recounts in these three states where the data suggests a significant need to verify machine-counted vote totals.

The website says Stein is not seeking the recounts to help Hillary Clinton. Rather, the site says, “These recounts are part of an election integrity movement to attempt to shine a light on just how untrustworthy the U.S. election system is.”

The website also says that the organizers can’t guarantee a recount will happen and pledged “to use the money for election integrity efforts and to promote systemic voting system reform” if recounts don’t happen or more than enough money is raised. 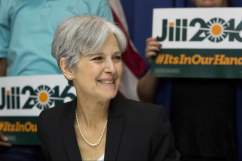