What the drone was doing in the South China Sea is disputed. (Getty)

China said it would return the US drone it had snatched from the South China Sea on Thursday.

The seizure underscores tensions between the two superpowers. President-elect Donald Trump has been a frequent critic of China’s policies and has called the latest incident “unprecedented”. China’s Defence Ministry, for its part, criticized the US for “hyping up” the issue.

The US says the underwater drone is used to monitor weather patterns. It became a flash point in China-US relations with the Pentagon calling on the drone’s immediate return.

Here’s what you need to know about the underwater drone seizure.

1. China Says It Seized the Drone Over Safety Concerns

In a statement on Saturday, China justified the seizure of the underwater drone. China’s warship had come within 500 yards of a US vessel when it took the drone. However, China said it had done so because of navigational safety issues. In the statement, China also reasserted its territorial rights criticizing the US for its “close-in reconnaissance and military surveys”.

“In order to prevent this device from posing a danger to the safe navigation of passing ships and personnel, the Chinese lifeboat adopted a professional and responsible attitude in investigating and verifying the device,” the statement said, according to AP.

2. The Pentagon Says the Drone is Used to Monitor Weather Patterns, But Some Analysts Are Skeptical

The type of unarmed drone, known as a glider, usually collect data on water temperatures and salinity levels, according to USA TODAY. It was found in the South China Sea and recovered by a Chinese Dalang III class Chinese warship just as the USNS Bowditch was about to reach it.

However, some Chinese and American analysts say the drone was most likely tracking China’s submarine routes. The South China sea is a contested area that has seen China disputing territorial rights over nearby islands.

China steals United States Navy research drone in international waters – rips it out of water and takes it to China in unprecedented act.

President-elect Trump, who has been a vocal critic of China, tweeted that China’s actions were “unprecedented”. Trump stoked tensions with China after calling Taiwan’s president after winning the election. He said Taiwan’s president Tsi Ing-wenhad called to congratulate him on his victory, but China saw the move as an attack on its One China policy, which states there is only one state called China, despite Taiwan’s claims to sovereignty. Not since President Jimmy Carter supported the One China Policy has the US leader called Taiwan’s president, according to USA TODAY.

Following the US blowback, China said that the US was exaggerating over the drone seizure. However, it didn’t say when it would return the drone, according to the New York Times. 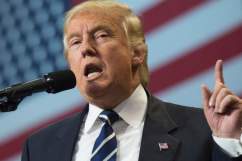 In a sign of warming relations between China and the Philippines, Manila said it wouldn’t take action against China for the drone seizure. In a news conference on Saturday he explained that, “politics in Southeast Asia is changing”. It was a reference to the new president Rodrigo Duterte shift away from its treaty ally, the US, to China when he took office in June, according to the Times.

It’s not the first incident of Chinese aggression that the Philippines has let slide. Satellite images released by the Center for Strategic and International Studies appear to show China had placed weapons on seven of its artificial islands in the Spratly archipelago. The Philippines’ foreign secretary, Perfecto Yasay Jr.responded saying, “there’s nothing we can do about that now”.

5. The Seizure Comes During Escalating Tensions Between US and China

Since Jimmy Carter, the US has respected the One China policy (Getty)

The election of President Trump has Chinese leadership worried. During the presidential campaign, Trump labeled China a currency-manipulator. His call to Taiwan’s president after the election cast doubt on the longstanding One China policy.

Under President Obama, China and the US reached a historic agreement by committing to the Paris climate accord. However, a point of contention in the relationship is China’s claim that it owns the territories and waters in the South China Sea. In a statement to China’s state-run press, retired rear admiral Yang Yi said the drone had entered disputed Scarborough Shoal lands claimed by the Philippines and China. The incursion was an invitation for Chinese sailors to pick up the drone, he said.

Loading more stories
wpDiscuz
2
0
Would love your thoughts, please comment.x
()
x
| Reply
A Chinese warship snatched an American drone from the South China Sea. In a statement, China said it would return the drone, saying it had removed it for safety reasons.