President Obama Welcomes the 2016 World Series Champion Chicago CubsLive coverage of this event has concluded. Drag the counter along the timeline below the stream to replay. The full video will be posted to http://www.whitehouse.gov/videos-archive momentarily.2017-01-16T15:18:45.000Z

The World Series celebration for the Chicago Cubs isn’t quite over yet.

With just a few days left in President Barack Obama‘s 8-year tenure, the Cubs will visit The White House on January 16. The team vowed to do so before Obama, a Chicago native, left office and President-elect Donald Trump takes over January 20.

Chicago won the 2016 World Series, breaking a long, 108-year drought in which franchise history hadn’t won the championship series. Cubs chairman Tom Ricketts said to ESPN last week, “once you get an invite to the White House, you go.”

In addition to the link above, there are other ways to watch the visit to Washington D.C. live. Check them out below.

The NBC Sports App will also provide a live video stream of the ceremony. The network will also broadcast the ceremony online here. You can also watch a stream here. 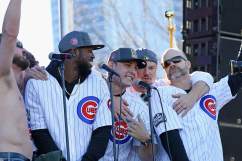