President Barack Obama has denied clemency to Native American activist Leonard Peltier, dashing what may be his final hopes to ever see freedom again.

The decision has generated strong reaction on social media among supporters of Peltier, who believe the American Indian Movement activist was railroaded by the government in the FBI’s targeting of AIM in the 1970s. Even the Pope had asked Obama for clemency.

Peltier was convicted of murdering two FBI agents during a 1975 shootout on the Pine Ridge Indian Reservation in South Dakota. A Native American man was also shot and killed, allegedly by an FBI sniper. The conflict surrounding the murders has been showcased in well-known books and movies, and Peltier’s cause has received decades of advocacy from prominent celebrities and humanitarians. The site Democracy Now broke the news that Peltier’s clemency was rejected by a president who Peltier’s own lawyer acknowledges may have represented his last hope to see outside of a prison.

1. Obama Rejected Peltier’s Request for Sentence Commutation & There Is No Appeal

According to Democracy Now, Peltier’s attorney was informed that Peltier’s clemency was denied on January 18 in an email that read: “The application for commutation of sentence of your client, Mr. Leonard Peltier, was carefully considered in this Department and the White House, and the decision was reached that favorable action is not warranted.”

The email continued, according to Democracy Now: “Your client’s application was therefore denied by the President on January 18, 2017… Under the Constitution, there is no appeal from this decision.”

Peltier, 72, a Lakota, has spent 41 years in prison. According to Mother Jones, “Some have come to view him as an international symbol of the mistreatment of Native Americans by the US criminal justice system; others see him as the murderer of two FBI agents who should continue to pay his debt to society.”

Peltier’s supporters had growing optimism because of Obama’s pardon on January 17 of Oscar Lopez Rivera, who was a member of a FALN militant group seeking Puerto Rican independence. That group was responsible for a series of bombings. 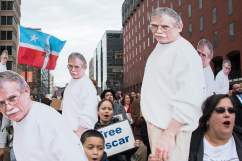 2. Many Had Signed a Petition Urging Mercy for Peltier & Even the Pope & Prosecutor Asked Obama to Free Peltier

Very, very disappointed in @POTUS decision about #LeonardPeltier. ustice has not been served! https://t.co/3VrPOX5Q9q pic.twitter.com/b17RcXikla

Peltier has always maintained his innocence. According to the New York Daily News, the Pope himself wrote Obama seeking clemency for Peltier.

The United States Attorney who was part of the Peltier post-trial prosecution, James Reynolds, even urged the president to grant Peltier clemency, writing in the Chicago Tribune, “Although no trial is perfect, Peltier’s was unusually troublesome, particularly when viewed with the benefit of hindsight… It was a very thin case that likely would not be upheld by courts today. It is a gross overstatement to label Peltier a ‘cold-blooded murderer’ on the basis of the minimal proof that survived the appeals in his case.”

A long list of dignitaries also asked Obama to show mercy to Peltier. FreeLeonard.org says “the Southern Christian Leadership Conference, National Congress of American Indians, the Robert F. Kennedy Memorial Center for Human Rights, Archbishop Desmond Tutu and Rev. Jesse Jackson, among many others” considered Peltier “to be a political prisoner who should be immediately released.”

Many had signed petitions online seeking clemency for Peltier. A letter from the chairman of the Oglala Sioux tribe also went to Obama.

“Mr. Peltier is a 72-year-old Dakota elder, a great great grandfather, who has never had the chance to sit and enjoy his children, grandchildren, and great great grandchildren as he’s been locked up for over 41 years…Let him spend his last years with his family and friends,” the letter reads, adding that Peltier suffers from a number of health conditions.

3. Peltier’s Case Was Showcased in a Robert Redford Documentary

The Robert Redford-produced 1992 documentary Incident at Oglala showcased the Peltier prosecution, and Peter Matthiessen’s acclaimed book, In the Spirit of Crazy Horse, also chronicled the troubled times and problems with the case.

A website devoted to freeing Peltier says of the documentary, “Indian activists ended up in an extended standoff with FBI agents, and the result was several deaths, including two federal men whose killing (according to many people) was never clearly attributed to a specific gunman. Nevertheless, the government laid blame for the tragedy on Leonard Peltier. Peltier has spent many years in prison, and Michael Apted’s film, which is hardly ambiguous in its commitment toward Peltier’s hoped-for freedom, is persuasive in both its detail and its case against brutal federal policies toward Indians.”

4. Peltier’s Attorney Said the Refusal to Grant Clemency Was Like a ‘Sentence of Death’

Peltier’s attorney, Martin Garbus, appeared on Democracy Now and said, “I think it’s fair to say that if he doesn’t get commuted by President Obama, he’ll die in jail. He’s a very sick man. So, Obama’s not granting him clemency is like a sentence of death. Trump ain’t going to do it.”

Many regard Peltier as a political prisoner, especially as AIM had grown out of a desire by activists to improve conditions for Indian people.

5. Peltier Was Convicted of Murdering 2 FBI Agents & Many Native Americans Also Died in the Clashes at Pine Ridge

The FBI has a full page devoted to the murders of the agents, writing, “On June 26, 1975, FBI Agents Jack Coler and Ronald Williams were murdered at Pine Ridge Indian Reservation in the southwest corner of South Dakota.”

The FBI contends, “Peltier had an outstanding warrant for his arrest, which had been issued in the Eastern District of Wisconsin, for Unlawful Flight to Avoid Prosecution (UFAP) – Attempted Murder (of an off-duty police officer). Peltier and his supporters allege they had traveled to Pine Ridge from Farmington, New Mexico with a contingent of American Indian Movement (AIM) members.”

The two agents were later found shot to death next to Coler’s vehicle. According to the FBI, “The agents’ vehicles alone had 125 bullet holes. This total does not take into account those rounds that hit the agents, glass, or were not recovered.” A Native American man, Joseph Stuntz, also died in the gun battles of that day.

Some, such as the Twitter user above, believe that Peltier is guilty, but others maintain the FBI got the wrong man.

FreePeltier.org writes that “the Wounded Knee occupation of 1973 marked the beginning of a three-year period of political violence on the Pine Ridge Indian Reservation. The tribal chairman hired vigilantes, self titled as ‘GOONS,’ to rid the reservation of American Indian Movement (AIM) activity and sentiment. More than 60 traditional tribal members and AIM members were murdered and scores more were assaulted.”

The site has a detailed accounting of issues in the case. For example, the FreeLeonard.org site contends, “An FBI agent who had previously testified that the agents followed a pick-up truck onto the scene, a vehicle that could not be tied to Mr. Peltier, changed his account, stating that the agents had followed a red and white van onto the scene, a vehicle which Mr. Peltier drove occasionally.”

And: “Three teenaged Native witnesses testified against Mr. Peltier, they all later admitted that the FBI forced them to testify. Still, not one witness identified Mr. Peltier as the shooter.”

John Ryan, a former FBI agent, also urged the president to grant clemency, writing, “Like the vast majority of FBI agents, I joined the agency out of a desire to make the world a better place. I believed then as I believe now in the American values of justice and fairness, but as I look back over the past 41 years, I see neither in the Peltier case.”