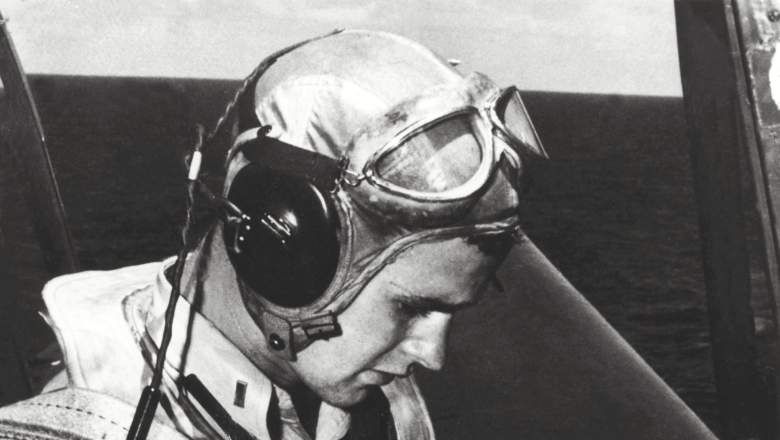 George Herbert Walker Bush was a teenager when he became a Naval aviator during World War II. (Getty)

George Herbert Walker Bush was the last President to serve in World War II. When he was just a teenager, Bush joined the U.S. Navy after graduating from Phillips Academy in Massachusetts in 1942. Bush’s service during the war made him a genuine hero. Bush served until 1945, when he was honorably discharged after the Japanese surrendered. For his service, he earned the Distinguished Flying Cross, three Air Medals and a Presidential Unit Citation.

Here is a look at the 41st president’s service in the U.S. Navy during World War II.

1. Bush Joined the Navy on His 18th Birthday & Became the Youngest Naval Aviator When He Was Commissioned

According to a Library of Congress bio on Bush, he reached the rank Lieutenant Junior Grade in the U.S. Navy.

After the attack on Pearl Harbor, Bush decided that he wanted to enlist in the Navy. He waited until after he graduated from Phillips Academy in 1942 to enlist. He was just 18 years old when he signed up and started preflight training at the University of North Carolina at Chapel Hill. Ten months later, he was commissioned on June 9, 21943, just a few days before his 19th birthday. That made him the youngest naval aviator at the time.

2. Bush Was Shot Down & Narrowly Escaped Being Tortured by the Japanese

Bush survived a near-death experienced on September 2, 1944. Bush and his crew were attacking the Japanese on Chi Chi Jima as part of operations against the Japanese in the Bonin Islands. During the fighting, he was hit and the engine caught on fire. While flying out, several miles from the islands, he managed to get out of the plane with one other member of his crew. However, the other man’s parachute didn’t deploy and he was killed. The other member of his team was also killed in action.

According to his bio, Bush managed to stay alive on a raft for four hours before the submarine USS Finback arrived to save him. Bush received the Distinguished Flying Cross for his actions that day and stayed on the Finback for another month to help rescue other pilots.

According to the Guardian, James Bradley’s book Flyboys reveals that Bush was lucky to avoid capture. If he did, Bush would have been a prisoner of war and possibly tortured by the Japanese.

Bush’s first duties in the Navy was as a photographic officer and his squadron was based on the USS San Jacinto. Veterans of the aircraft carrier called him “Skin” because of his thin frame.

“He was one hell of a nice guy,” John “Raq” Raquepau told the Virginian-Pilot in 2009 of Bush. “We’re the luckiest people in the U.S.A., because there are not many people who knew George Bush.”

“He was an extremely good pilot,” Charles “Chick” Peter said of Bush in an interview with the Pilot in 2009.

4. Bush Missed the Battle of the Philippine Sea, 1 of the Largest Air Battles in the War

While on the USS San Jacinto, Bush missed the Battle of the Philippine Sea, one of the major naval battles in the Pacific theater, although the San Jacinto took part in the battle. It was a major “carrier-versus-carrier” battle, where seven fleet carriers were among the 129 warships the Americans had. The Japanese fought with 90 warships, including five fleet carriers.

The battle resulted in an American victory. It is estimated that 2,987 Japanese died, while just 109 Americans died in the battle.

According to the World War II database, Bush missed the Battle of the Philippine Sea because he lost his aircraft after an emergency landing right after takeoff. Still, shortly after the battle, he helped sink a Japanese cargo ship off Palau in July 1944. In August 1944, he was promoted to lieutenant.

After his month on the U.S. Finback, he returned to the San Jacinto.

5. Bush Flew in 58 Combat Missions During the War

During the war, Bush flew in 58 combat missions, notes Mid Atlantic Air Museum. In an interview with the museum, Bush said that safety was always a top concern.

“We thought about safety a great deal,” Bush recalled in the interview during his presidency. “There were a lot of safety posters around, especially for brand new pilots. The posters related to taxiing, care of aircraft, and a lot of elementary areas. We didn’t pack our own parachutes, but we did learn about caring for our chutes. We received a lot of instruction about safety during a bailout. I remember being hit and I instinctively turned my aircraft to the right to release the air stream pressure from the door leading into the ventral gunner’s compartment.”

After his service, he was reassigned to Norfolk Navy Base, where he helped train new pilots. He was not honorably discharged until September 1945, after the Japanese surrendered.

“I’ve seen carrier crews in action and the basic sequence has changed dramatically,” Bush told MAAM. “Things seem much more efficient and more complex than they were in my day.”