Getting ready to leave The White House with @realdonaldtrump as he prepares to address Congress #JointSession pic.twitter.com/vlR1wPHGkK

The First Daughter wore a sleek red dress to her father’s speech before the Joint Session of Congress. You can see a photo of Ivanka in the dress above as she prepared to leave the White House for the Trump speech to Congress.

“Getting ready to leave The White House with @realdonaldtrump as he prepares to address Congress #JointSession,” Ivanka wrote on Twitter, posting the photo with her husband Jared Kushner, who is an adviser to Trump.

Some people didn’t think the dress was appropriate for a serious speech.

@IvankaTrump @realDonaldTrump Honey it's a speech, not a cocktail party

@AvivaHadara @IvankaTrump Oh, I was being serious. Classless fashion – very inappropriate for this occasion.

Driving some of the criticism: The off shoulder nature of the dress.

Is it just me or did @IvankaTrump look ashamed, maybe embarrassed or perhaps jealous her daddy didn't give her a shout out. #Jointsession pic.twitter.com/3hl2K0Ug24

Others loved the look.

Here’s another look at the First Daughter’s dress:

In contrast, Melania Trump chose black for the speech:

Melania Trump smiles confidently before her husband addresses a joint session of Congress. Her fashion choices are always on point and perfect. (Getty)

Earlier in the day, Ivanka also chose red – a red blazer – as her father signed two bills relating to gender diversity in #STEM fields. Melania Trump also wore a red dress at the earlier event but chose black for the congressional speech. Some Democrats said they were wearing white to the speech in honor of the suffragist movement.

@AvivaHadara @IvankaTrump Oh, I was being serious. Classless fashion – very inappropriate for this occasion.

Proud to support the signing of H.R. 321 & 255. #ClosingTheGenderGap in STEM fields is vital to innovation and workforce development. #STEM pic.twitter.com/9VsIbTxDEO

Here are Ivanka and Jared on February 26 after the governors’ dinner.

Just arrived home after an amazing night at The White House with @realdonaldtrump, @Flotus and 46 governors from across the nation pic.twitter.com/OeqPxm60vs

From the monster truck show to the Governor's Ball… pic.twitter.com/CIe6SKHwTN

Since Trump took office, Ivanka, his eldest daughter has become an important figure at his side, filling in at times when First Lady Melania Trump is in New York, where FLOTUS is living during the week while her son with Trump, Barron, 10, finishes out the school year. Ivanka has also found herself the focal point of criticism and controversy over her clothing line, which some Trump opponents have been boycotting.

Trump’s speech to Congress was hotly anticipated with ABC News and others reporting that he would urge people to set aside trivialities and strike a compromise on immigration, while focusing on getting those illegal immigrants out of the country who commit crimes but not others. However, as Trump is unpredictable, it was anyone’s bet what he would actually say.

The president was seen getting into the presidential limo with Melania Trump.

This post will be updated with more photos of Ivanka at the speech when they become available.

See photos of Melania Trump at the speech to Congress here: 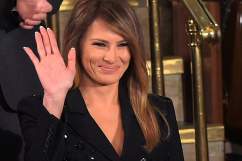