A daiquiri stand bouncer was identified as the suspected drunk driver who plowed into a crowd watching a parade in New Orleans.

Neilson Rizzuto, 25, is under arrest, reported NOLA.com, which added that his blood alcohol content was allegedly .232. Although the style of the crash initially seemed to mirror those used by terrorists in Europe, police and the mayor allege the suspect appeared intoxicated, and authorities said they don’t think the incident is terrorism-related.

Rizzuto was booked “on two counts of first-degree negligent vehicular injuring, one count of hit-and-run driving causing serious injury and one count of reckless operation of a vehicle,” the newspaper reported. Rizzuto’s Facebook page has some posts that are pretty chilling in retrospect, such as this share:

No one suffered life-threatening injuries, but eyewitnesses described a horrific scene in which the pickup truck plowed through rows of people watching the Endymion parade, which is part of the city’s Mardi Gras celebrations. Overall, at least 32 people were injured in the tragedy, which occurred February 25.

1. The Suspect Is Believed to Be a Drunk Driver but His Grandmother Says He Doesn’t Have a Drinking Problem

The police chief and mayor both told the news media shortly after the crash occurred that they suspected Rizzuto was a drunk driver. A BAC of .232 is three times the state’s legal limit.

One eyewitness alleged that Rizzuto seemed like he was “out of it” at the scene, according to Fox News. However, the suspect’s grandmother told NOLA.com that he “is a hard-working young man not known to have a drinking problem or a penchant for trouble.” She described herself as being “frozen” at the news, according to the newspaper.

A WDSU-TV reporter and other local media sources said it’s believed alcohol was the cause of the crash, in which Rizzuto is accused of plowing his pickup truck into the crowd after striking another vehicle. According to CNN, Police Chief Michael Harrison said “it appeared the suspect, who was driving a pickup truck that hit two cars before running into the crowd, was likely highly intoxicated.”

New Orleans’ mayor referred to the suspect as a “drunk driver” on Twitter. Fox News quoted the police chief as saying, “…it appears it was a subject who was highly intoxicated who struck a number of vehicles and veered off hitting a number of innocent people.”

2. One Report Said the Suspect Shouted at Police to Kill Him & He Shared a Facebook Post About Burning Things to the Ground

According to Fox News, a government source told the network “that the suspect was intoxicated and was shouting ‘kill me’ as he was being taken away” by authorities.

Photos and videos showed a chaotic scene as emergency workers tended to the injured and people frantically searched for loved ones during what is one of New Orleans’ biggest Mardi Gras parades.

Some of Rizzuto’s posts on Facebook now have an eerie feel to them.

He also shared this post in the days leading up to the incident:

Fox said the FBI is investigating the incident.

3. Those Injured Ranged From a Toddler to a Police Officer

#BREAKING: 1 of the victims was a female police officer. #NewOrleans pic.twitter.com/gmKAI9IaEP

The New Orleans Advocate newspaper reported the crash occurred at Orleans and Carrollton during the Endymion parade. New Orleans police initially said the number injured could grow, and it did throughout the night, as reports of those injured increased from 12 to 21 and then to 28.

A police officer was among those injured, and the youngest victim was a toddler. However, none of the injuries was life threatening, police later said.

New photos from scene of Endymion crash at Carrollton and Orleans in New Orleans. https://t.co/zOayvKIlfy pic.twitter.com/zO8NwZmG8R

WKRG reported that four Mobile Alabama students from Spring Hill College were also injured. The injury count rose to 32 on February 26, according to NOLA.com.

The newspaper said that one woman, age 22, “is in critical condition with a lacerated liver and other internal injuries to her abdomen.”

New Orleans is known for its drinking culture and daiquiri stands. Rizzuto’s Facebook page indicates he is part of that culture by virtue of his employment. On Facebook, he gives his nickname as “Pasta.”

BREAKING: a car has plowed into a crowd of people in New Orleans, atleast 28 critically injured. Pray for them. pic.twitter.com/ViEgMvsg15

On Facebook, Rizzuto says he is a “Bouncer at Daiquiris & Company” who studied at Ponchatoula High School.

Many of his posts are of typical activities like eating out with friends, boating, and hanging out in New Orleans. He also posted an anti Bill and Hillary Clinton meme.

5. Rizzuto Once Planned to Study Engineering & Was an Acolyte

According to The Advocate, a 2010 issue of a local Louisiana newspaper reported that Rizzuto was “presented with a gift from the congregation of Ponchatoula’s All Saints Episcopal Church, where he served as an acolyte. According to the paper, he was also a member of the Young Marines.”

The Advocate said the newspaper indicated at that time that Rizzuto was “planning to attend the University of Louisiana at Lafayette to study computer engineering. Orleans Parish Civil District Court records suggest he did enroll in some classes there.”

Although the crash bore some of the hallmarks of terrorist attacks in Nice, France, and Berlin, Germany, where terrorists drove vehicles into crowds, officials in New Orleans said they suspect alcohol, not terrorism in the Endymion parade incident.

See more photos and videos from the scene here: 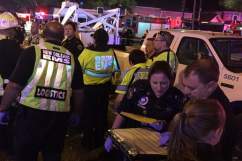 Loading more stories
wpDiscuz
15
0
Would love your thoughts, please comment.x
()
x
| Reply
Neilson Rizzuto was identified as the suspected drunk driver who allegedly plowed into a crowd of people at the New Orleans' Endymion parade, which is part of Mardi Gras.