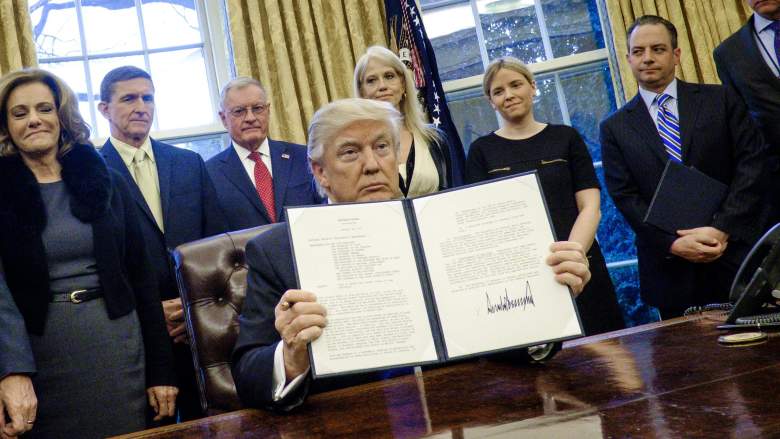 President Donald Trump holds up one of the executive actions that he signed on January 28. The orders have since been made into a meme that is making its way around the internet. (Getty)

On January 28, President Donald Trump signed three executive orders, one which requested The Pentagon to draft a plan to battle ISIS within 30 days. He proudly displayed the executive orders he had just signed to every camera at every angle in the Oval Office at the White House.

The video footage of the moment quickly made its way across the internet and a new meme was born, this one in GIF form.

Within three days, a visual effects designer who lives in Los Angeles created a Twitter account with the handle “Trump Draws” to showcase his edited video of Trump drawing childlike pictures and proudly touting them to media members.

The graphic artist told BuzzFeed: “Every day for my job I put fake things on images and make them look as real as possible.”

Since its inception January 31, the twitter account is close to topping 400,000 followers, and others have taken it upon themselves to create their own. There is now a website, MakeTrumpDraw.com, that allows any internet user to create one of the popular GIFs.

Here are some of the best “Trump Draws” memes and tweets from around the internet:

In the account’s very first tweet, Trump was shown drawing a house with an arrow on one page indicating that it’s indeed a house on the opposite page.

On February 4, the Twitter account posted a GIF of Trump “drawing” a picture of his “friend,” Spongebob Squarepants.

The New York Daily News got in on the action on Twitter on February 9.