Andy Milonakis, a 41-year-old comedian with growth hormone deficiency so he appears to be a teenage boy, was live streaming on Twitch.tv when an older man named William Bows approached him for sex.

Twitch is a live streaming video platform owned by a subsidiary of Amazon.com that gets as much as 100 million page views per month.

These two supply most of my laughter from clips on Twitch. Good to see you @REALIcePoseidon and @AndyMilonakis! Enjoy SF! pic.twitter.com/YcMEDsaO0d

While Milonakis is live streaming to his followers, a man is heard off-camera telling Milonakis that he’s throwing a party. He then asks Milonakis if he can join him at his table. Milonakis obliges. The man then offers Milonakis a cigarette and informs him that his name is William Bows and that he’s been arrested for the past 7 days but that the cop let him loose after he promised him a sandwich.

Obviously, there is a mental health component at play, but the video then takes a dark turn.

Bows offers Milonakis some cookies from his grocery bag and then begins to discuss sex. “Where do you hang about?” Bows asks him. “Guess what, you’re coming with me… and guess what, I haven’t had sex in 5 years and I’m not having sex until the time comes… I’m not just about to abuse my friend, especially with the camera.”

The man then says that he’s going to go get some “tobacco.” Milonakis’ Twitch followers tell him to run. Milonakis, however, joins Bows for a walk. Bows appears to fellate a sucker for Milonakis.

Bows then sings about how he’s been in a psych ward. Milonakis makes it a duet. However, when Milonakis has an opportunity to casually leave Bows, he takes it. 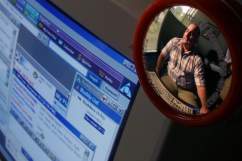 Loading more stories
wpDiscuz
0
0
Would love your thoughts, please comment.x
()
x
| Reply
Andy Milonakis, a 41-year-old comedian with growth hormone deficiency so he appears to be a teenage boy, was live streaming on Twitch.tv when an older man named William Bows approached him for sex.