Tad Cummins and Elizabeth Thomas at an Oklahoma Walmart. (TBI)

Tennessee authorities hunting for a missing teacher and his student say there’s been a confirmed sighting of the pair at an Oklahoma City Walmart.

They also say that teacher Tad Cummins and student Elizabeth Thomas appear to have dyed their hair – with Thomas now having red hair. The tip came in on March 30, just over two weeks after Cummins and Thomas were captured on video at the Walmart. Authorities – who have launched an aggressive manhunt for the pair – are trying to figure out which car they drove there. It’s not clear whether the Tennessee teacher and student are still in Oklahoma.

The Tennessee Bureau of Investigation released a series of new photos on March 31 that they say is high school health teacher Cummins and freshman Thomas. It’s the first confirmed sighting of Thomas and Cummins; the day before, in Tennessee, there was another reported sighting, but it was later declared false.

Elizabeth Thomas at the Walmart. (TBI)

Here’s how they looked before vanishing:

“Investigators obtained surveillance images from a Walmart on East I-240 Service Road in Oklahoma City, Oklahoma from the afternoon of March 15th, showing Tad Cummins and Elizabeth Thomas shopping at the store,” the TBI wrote in an update to its Amber Alert in the Thomas case. “Cummins used cash to purchase various food items, but did not purchase anything else of significance.” 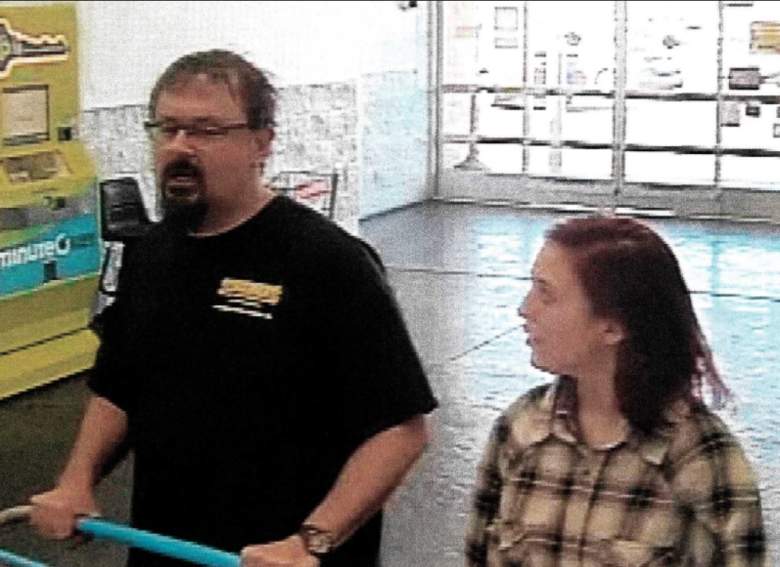 Cummins, 50, and Thomas, 15, have been on the run since mid March, when they vanished in the midst of an investigation into a complaint that Cummins, who has now been fired, was seen kissing Thomas in a classroom. Cummins taught at Culleoka High School in Tennessee. Cummins’ wife, Jill, has publicly urged her husband to return the teen.

Before they vanished, both Cummins and Thomas made extensive posts about love on Instagram, although the teen mixed her love posts with those about depression and even death. Authorities say that Thomas was abused in the home. Thomas calls herself “wife” on Instagram, and posted a graphic from Beauty and the Beast around the time she vanished that says “every beauty needs her beast to protect her from everything but him.”

Elizabeth Thomas’ father took to Twitter and posted several photos of his missing daughter, including this one. The father urged his daughter to come home and asked for the public’s help in finding her. (Twitter)

According to the TBI, “Thomas is a 15-year-old white female, with hazel eyes, stands 5’0” and weighs 120 pounds. She was last seen wearing a flannel shirt and black leggings. Cummins is a white male, who stands 6’0”, weighs approximately 200 pounds, and has brown hair and eyes.”

Authorities say they believe Cummins is “armed with two handguns and driving a silver Nissan Rogue with Tennessee tag 976-ZPT. A warrant has been issued for Cummins for Sexual Contact with a Minor and Aggravated Kidnapping. On Friday, the TBI added him to the state’s ‘Top 10 Most Wanted’ list. There is a $1,000 reward for information leading to his capture.”

As of March 31, the TBI, says it has received more than 1,200 tips from across the country. “The TBI would urge the public to remain vigilant and report any information that may prove beneficial in the ongoing search to 1-800-TBI-FIND. If you spot the vehicle and can verify the license plate to be TN 976-ZPT, call 911 immediately,” the authorities say.

On March 20, one week after Cummins and Thomas disappeared, the Tennessee Bureau of Investigation released this photo of Cummins. It was taken shortly before he vanished. The teacher and student were still on the run. The Walmart pictures, taken after this one, indicate he has tried to alter his appearance by darkening his hair. (TBI)

Authorities accused Cummins of grooming Thomas for abuse by playing on her problems at home. According to WSMV, Thomas was home schooled until her freshman year of high school. The television station quoted the local district attorney as saying her home life was a troubled one.

Read more about the social media posts of Cummins and Thomas here: