Detective Eric Small (Sanford PD) said he made a promise to Kerry Rear's dad that he would search until she was found. #NEWSCENTERnow pic.twitter.com/oHoUCkDiFx

The body of a missing Sanford, Maine woman has been found in a wooded area.

Kerry Rear, 40, had been missing since January 22.

Police are not yet saying whether they consider the death suspicious or not, some media reports said. However, The Journal Tribune reported that the police do not believe foul play was involved. An autopsy will be conducted to determine Rear’s cause of death.

1. Rear Was Disoriented When Last Spotted in a Convenience Store

#BREAKING Sanford Police say Kerry Rear's body has been found around 200 yds from where she was last seen. #NEWSCENTERnow pic.twitter.com/v1OiHTs6v7

According to Central Maine.com, Rear was last seen leaving the Lil’Mart in Sanford.

She was disoriented and thought she was in a bank, the news site reported.

2. Rear May Have Gotten Into a Vehicle After Leaving the Store

According to a missing poster circulated by loved ones and police after Rear disappeared, she may have gotten into a vehicle after leaving the store.

She was wet and in stocking feet at the time, the poster says.

3. Rear Was Found Only a Half Mile From Where She Vanished

According to The Bangor Daily News, Rear’s body was found on the afternoon of March 8 “following a search by the Maine Warden Service along Hancock Way off Route 109.”

That’s only about a half mile from where she was last seen, the newspaper reported.

The Sanford, Maine Police Department wrote on Twitter: “The search for Kerry Rear and the investigation into her disappearance has been ongoing since police were first notified on January 29, 2017. Today, the Sanford Police Department and Maine Warden Service had been searching an area of woods off of Country Club Road, approximately 200 yards from where she was last seen. Around 2:00 p.m. this afternoon, a sergeant with the Maine Warden Service came upon Rear’s body. The Maine State Police and Office of the Chief Medical Examiner were notified and responded to the scene. Rear’s body will be transported to the medical examiner’s office for an autopsy. No further information at this time.”

4. Police Pledged to Keep Looking Until They Found Rear 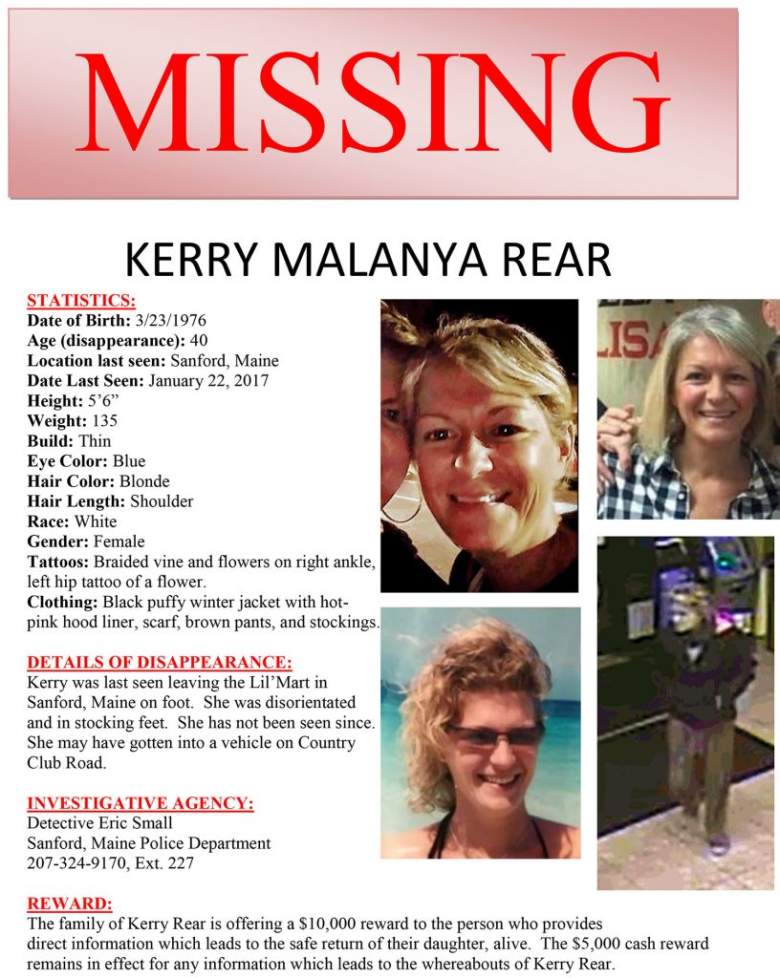 According to Kristina Rex, a reporter in Maine, police vowed they would find Rear.

“Detective Eric Small (Sanford PD) said he made a promise to Kerry Rear’s dad that he would search until she was found,” Rex wrote on Twitter.

Rear’s father, who lives in Florida, had reported her missing, according to The Journal Tribune.

5. A Large Search Effort Was Launched to Find Rear

Volunteer dog and rescue teams had looked for the missing Sanford woman.

“Police, firefighters and the Maine Warden Service searched the area around L’il Mart and the roundabout Tuesday, employing a search dog. As well, the warden service used an aircraft to try and spot the woman,” reported The Journal Tribune.

Loading more stories
wpDiscuz
0
0
Would love your thoughts, please comment.x
()
x
| Reply
Kerry Rear, a missing Sanford, Maine woman, has been found dead after her body was located in the woods.