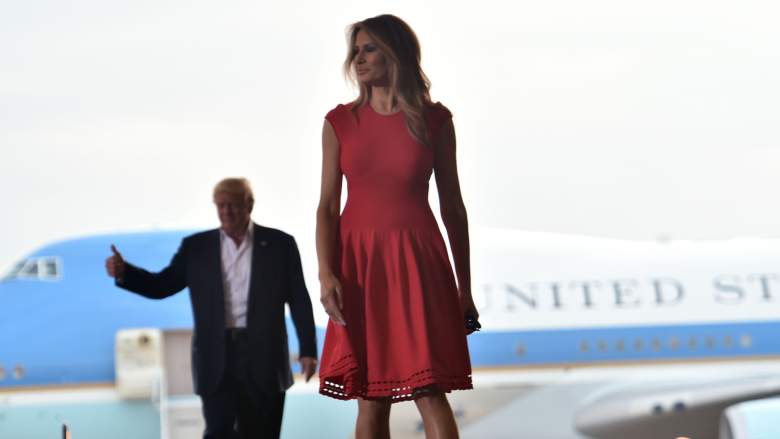 US President Donald Trump and First Lady Melania Trump arrive for a rally on February 18, 2017 in Melbourne, Florida. (Getty)

There are a few things you can take to the bank when it comes to Melania’s dresses, pants, and gowns: She likes solids. She likes futuristic sleeves and necklines. She favors dresses. Some have even compared her simple monochrome elegance to Jackie Kennedy.

You aren’t likely to see Melania wearing busy patterns. She’s more likely to wear vibrant hues – hot pink, red – at Mar-a-Lago, the Trump’s vacation home in Florida. At the White House, she often chooses sedate hues, such as white or black. She likes American designers like Ralph Lauren and Michael Kors, and her dresses carry steep price tags ($9,500 for the glittery ensemble she wore to her husband’s speech to Congress alone.)

That’s despite some designers refusing to dress the First Lady.

Here are some of the First Lady’s looks since assuming the role: 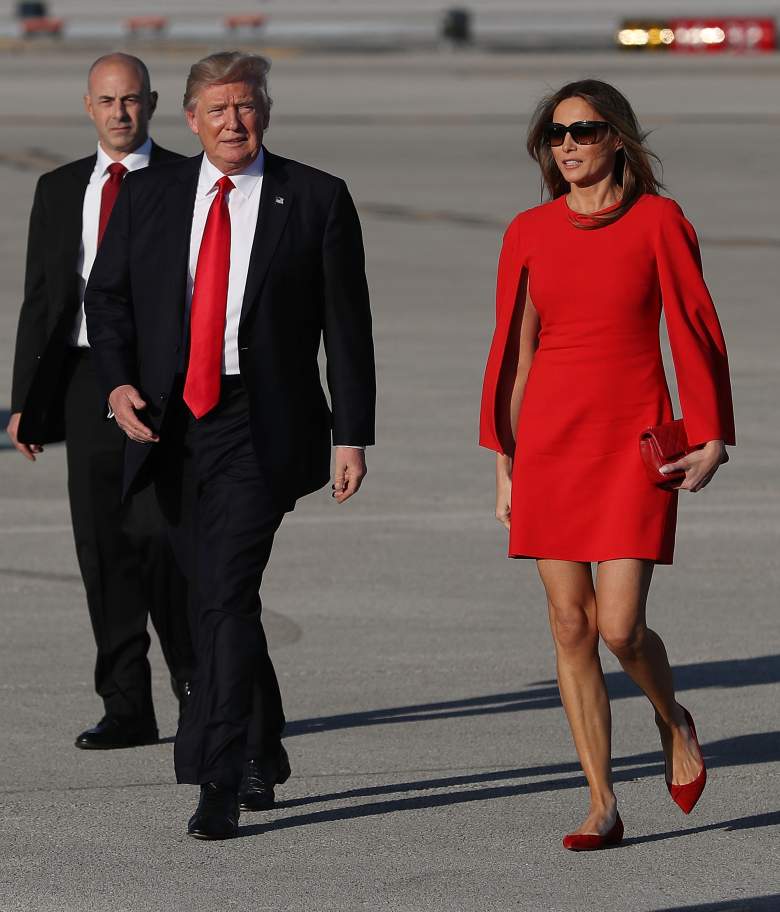 Donald Trump walks with his wife Melania Trump on the tarmac after he arrived on Air Force One at the Palm Beach International Airport for a visit to his Mar-a-Lago Resort for the weekend on February 3, 2017 in Palm Beach, Florida. (Getty) 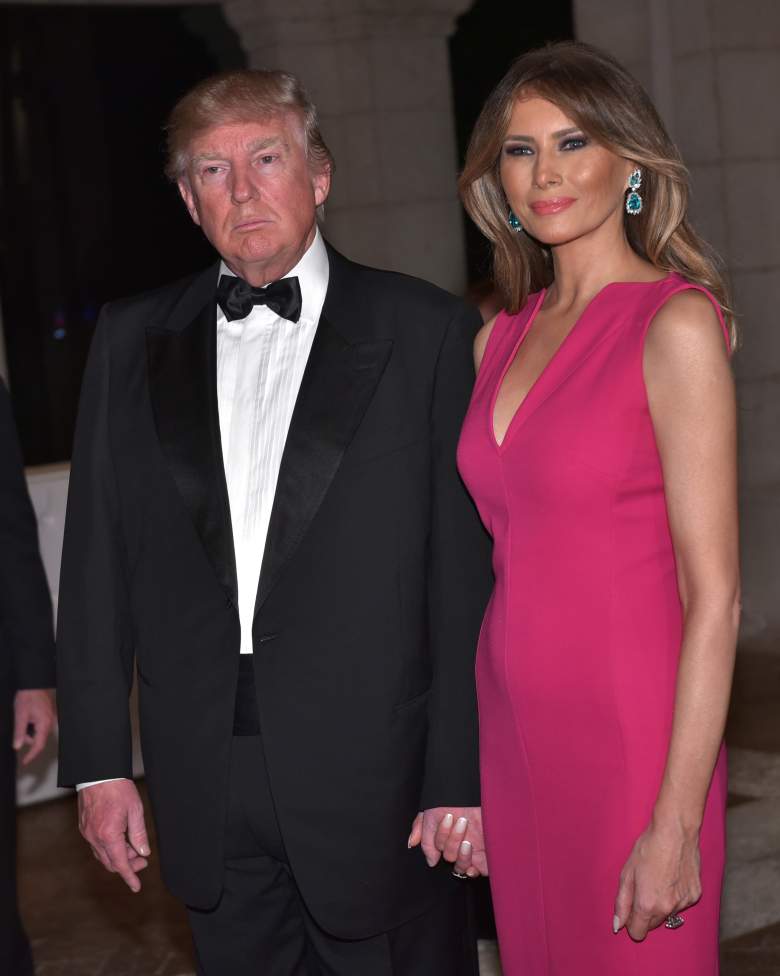 The Trumps arrive for the 60th Annual Red Cross Gala at his Mar-a-Lago estate in Palm Beach on February 4, 2017. (Getty) 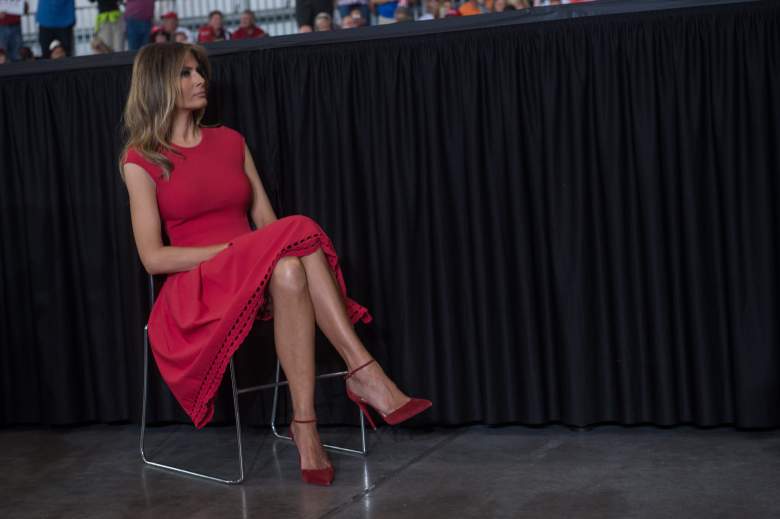 Melania Trump listens as her husband, US President Donald Trump addresses a rally in Melbourne, Florida, on February 18, 2017. (Getty)

Here are other views of those looks: 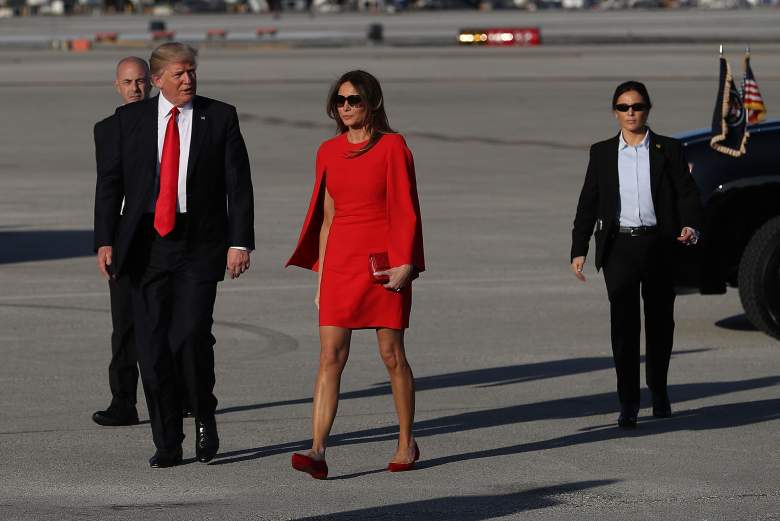 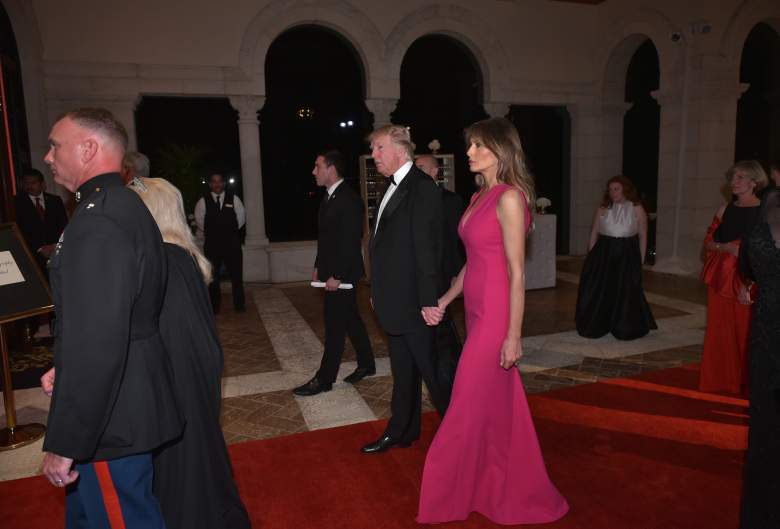 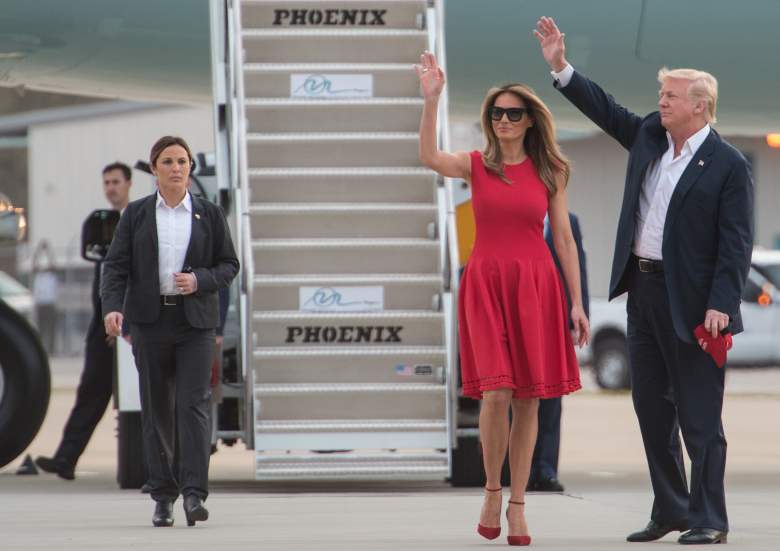 It’s rare to see Melania in slacks, but she wore them to the airport once as First Lady.

The Trumps arrive with Japanese Prime Minister Shinzo Abe on Air Force One at the Palm Beach International Airport as they prepare to spend part of the weekend together at Mar-a-Lago resort on February 10, 2017 in West Palm Beach, Florida. (Getty)

When Melania is doing official First Lady duties back at the White House, she often opts for suits or sheath dresses. Here are some of those looks:

When Melania Trump entered the room for her International Women’s Day luncheon, she received a standing ovation. (Getty) 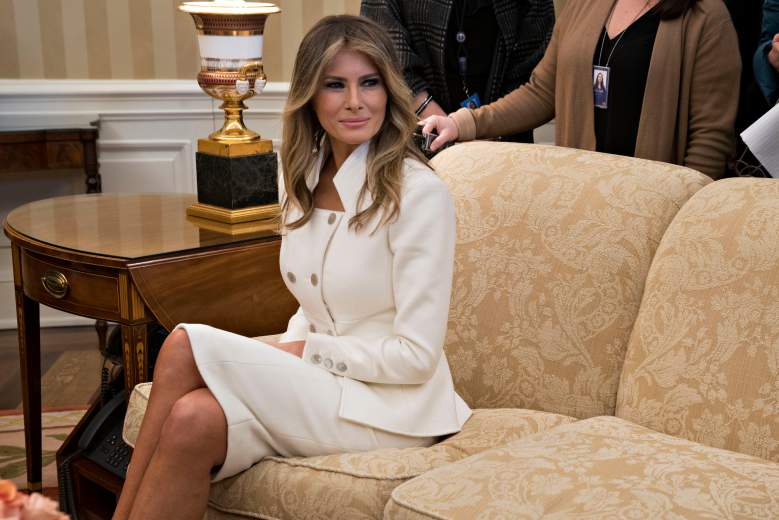 Melania sits in the Oval Office during a meeting between President Donald Trump and Israeli Prime Minister Benjamin Netanyahu at the White House on February 15, 2017 in Washington, D.C. (Getty) 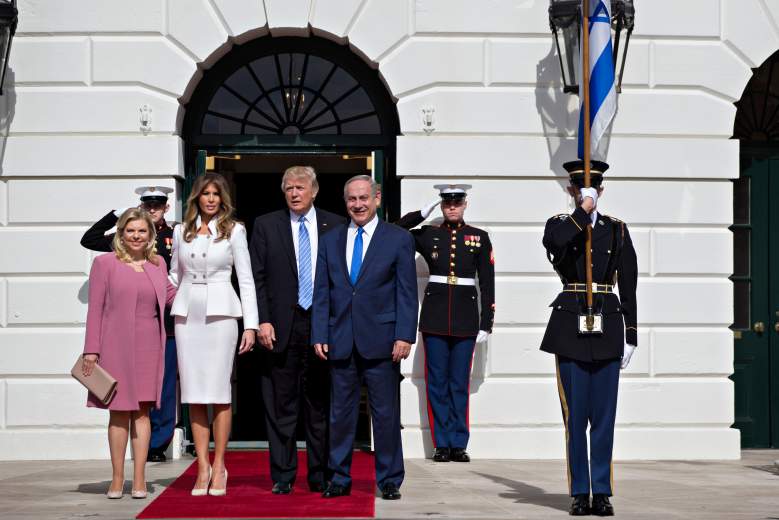 One of Melania’s favorite colors is black. 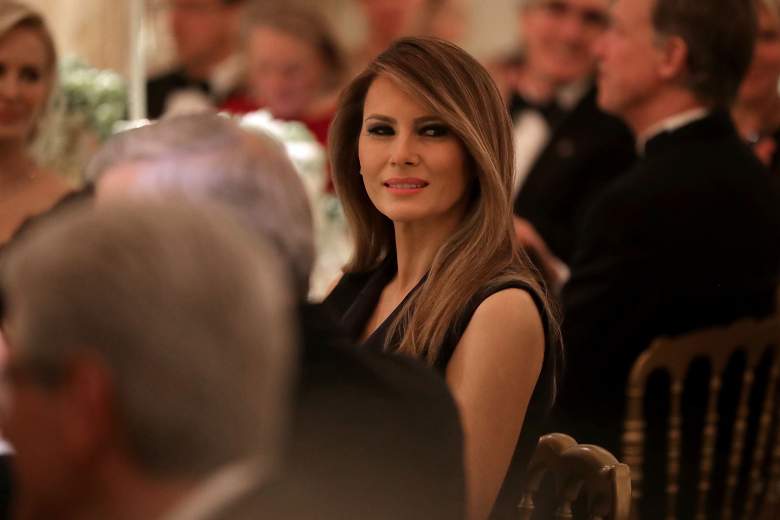 Melania Trump listens to a toast by her husband President Donald Trump while hosting the annual Governors’ Dinner in the East Room of the White House February 26, 2017 in Washington, DC. Part of the National Governors Association’s annual meeting in the nation’s capital, the black tie dinner and ball was the first formal event the Trumps will host at the White House since moving in last month. (Getty)

You won’t see Melania much in casual attire. Pretty much the only time that happened in public since the inauguration? The Trumps’ Super Bowl party in Florida: 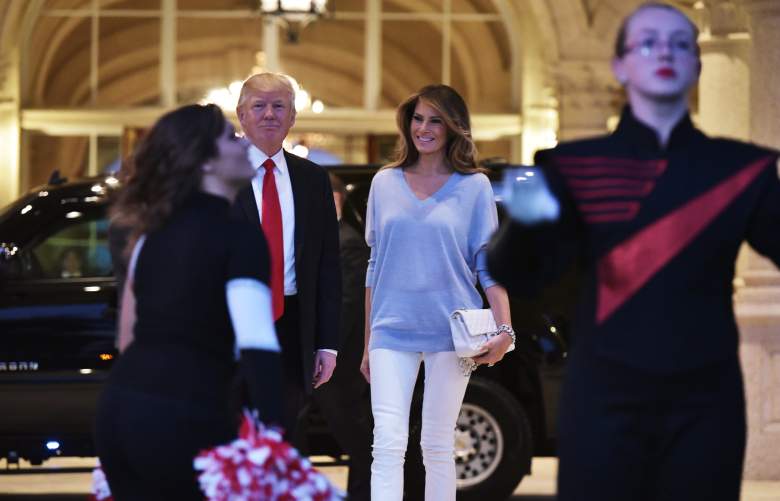 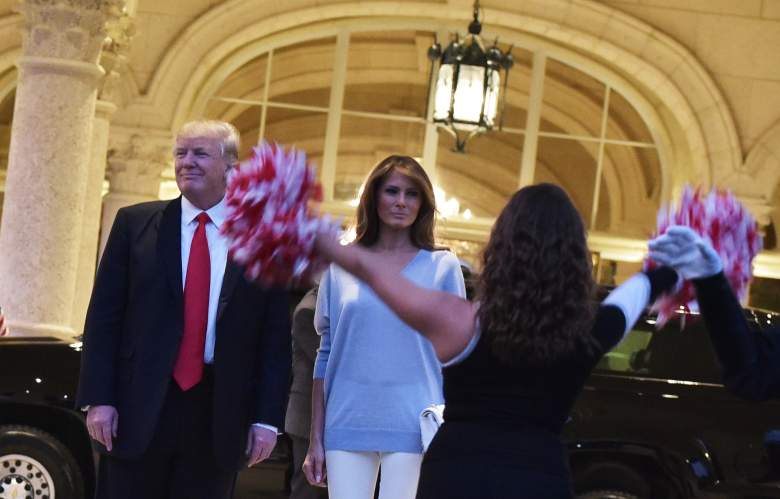 Melania wore a sparkling gown to her husband’s speech to Congress, which some critics called inappropriate for the occasion. 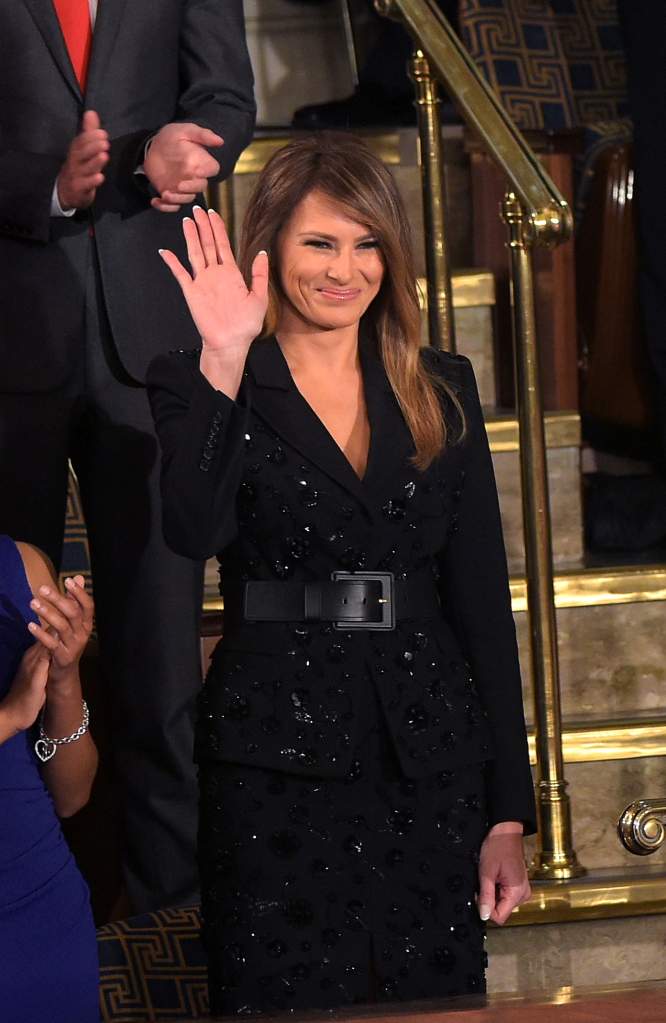 Melania Trump arrives before US President Donald Trump addresses a joint session of the US Congress on February 28, 2017, in Washington, DC. (Getty) 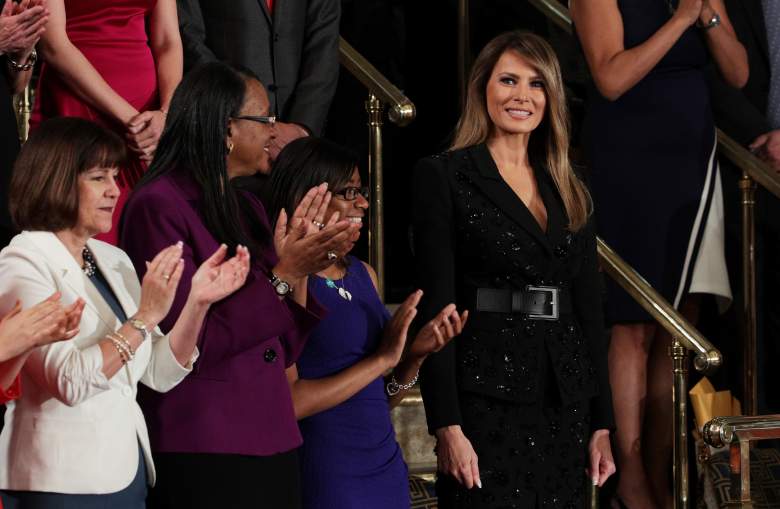 The dress does not come cheap off the rack: 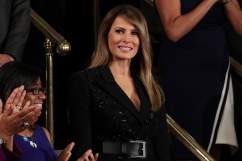 Melania dazzled in an array of dresses and gowns on inauguration day. 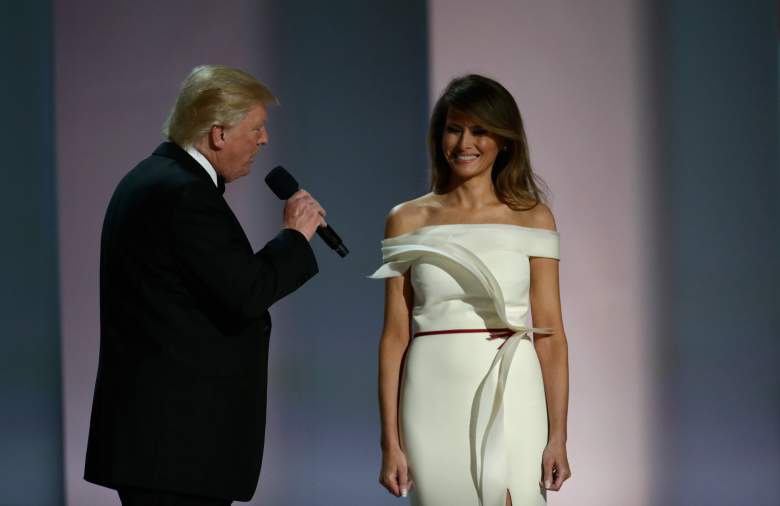 President Donald Trump stands near Vice President Mike Pence, Karen Pence, and First Lady Melania Trump during a reception and dinner at Union Station the night before the inauguration. Her dress was a Reem Arca column dress that she wore for the candlelit dinner. (Getty)

Melania Trump’s Norisol Ferrari coat and dress were meant to pay tribute to the military. (Getty) 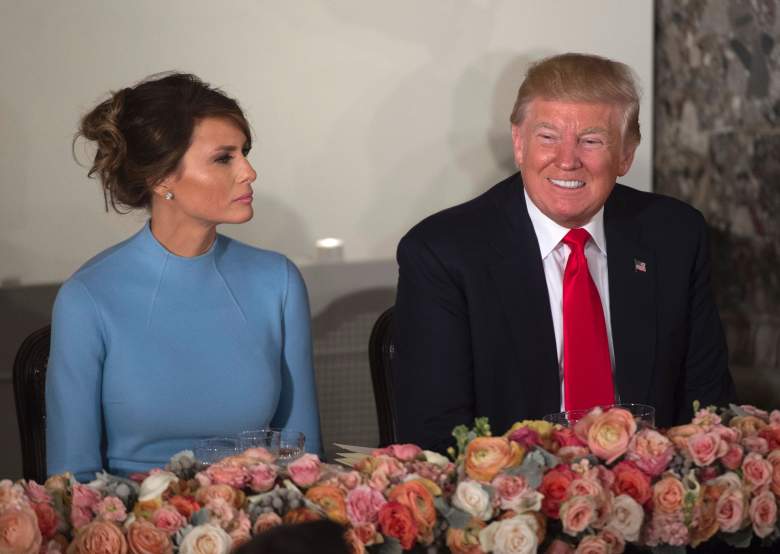 Melania at the inaugural luncheon. (Getty) 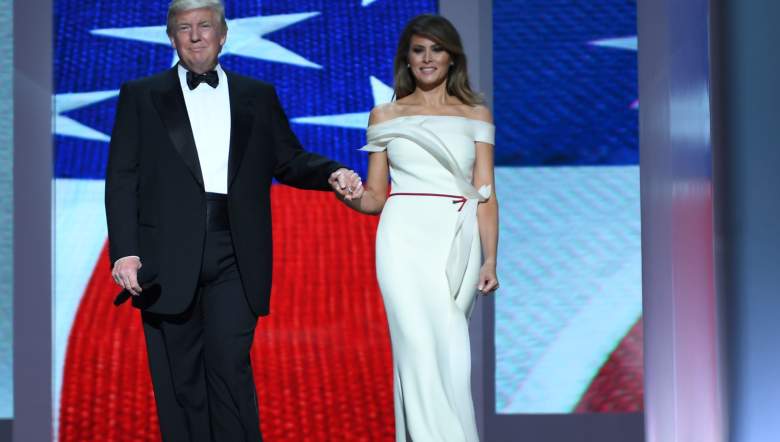 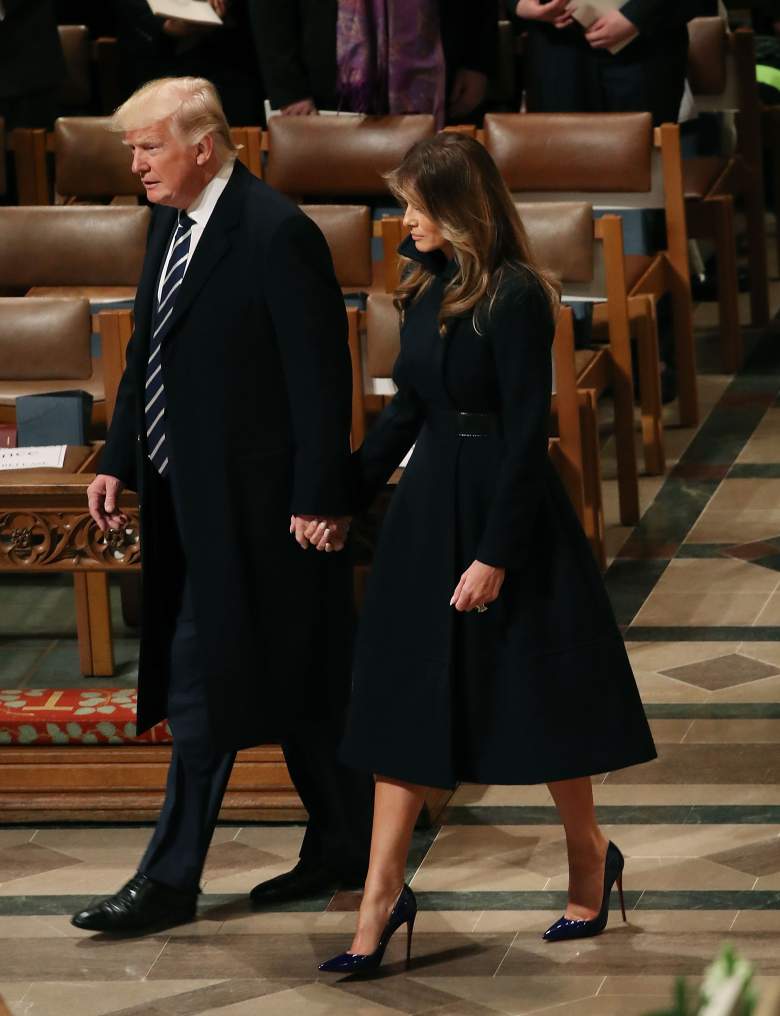 Trump wasn’t president yet, but the inauguration was just a few days away. 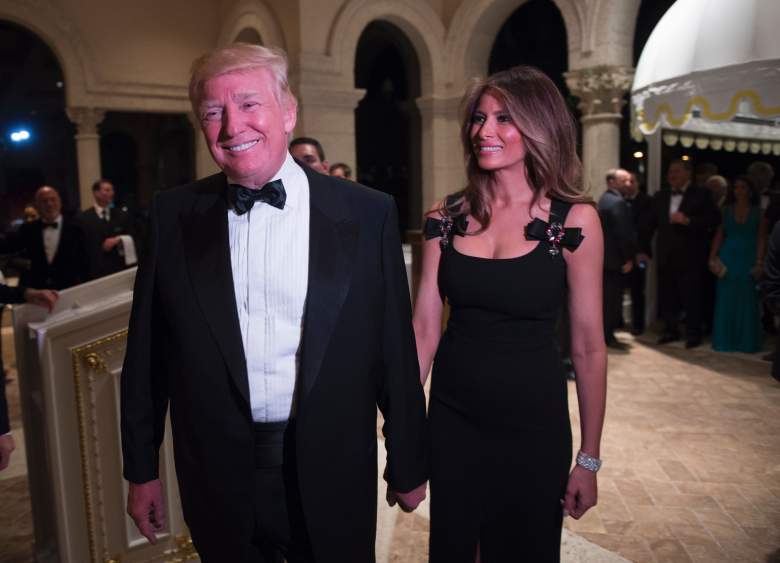 Donald Trump arrives with his wife Melania for a New Year’s Eve party at Mar-a-Lago on December 31st, 2016. (Getty)

Here’s a flashback to some of Melania’s campaign looks: 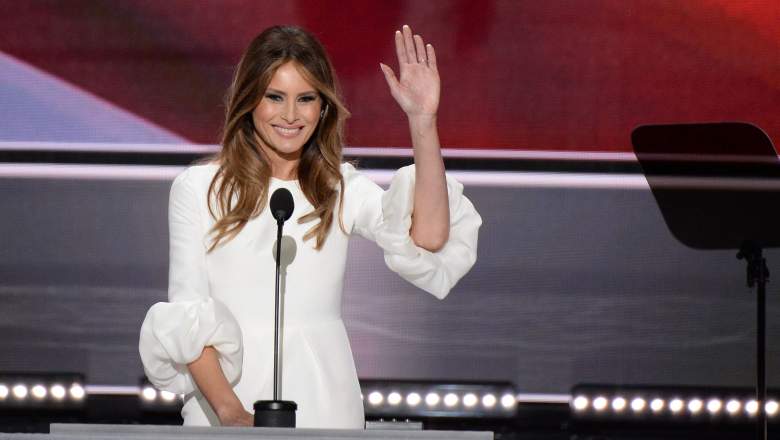 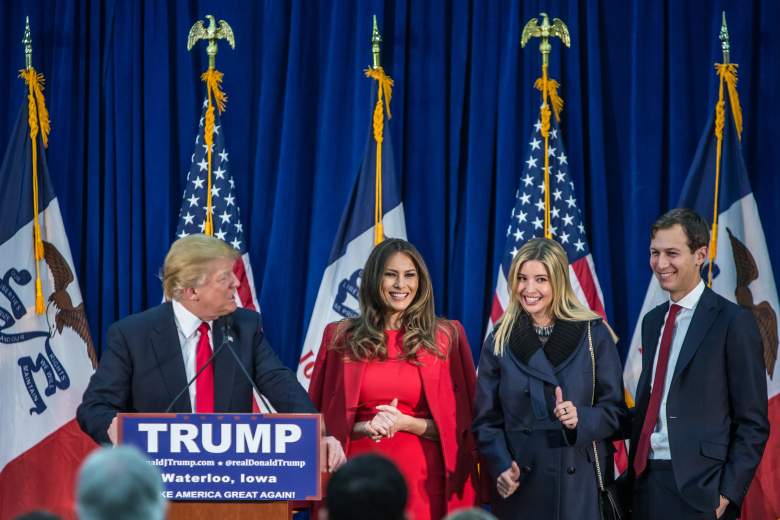 Melania’s style used to be a lot flashier before her husband hit the campaign trail. 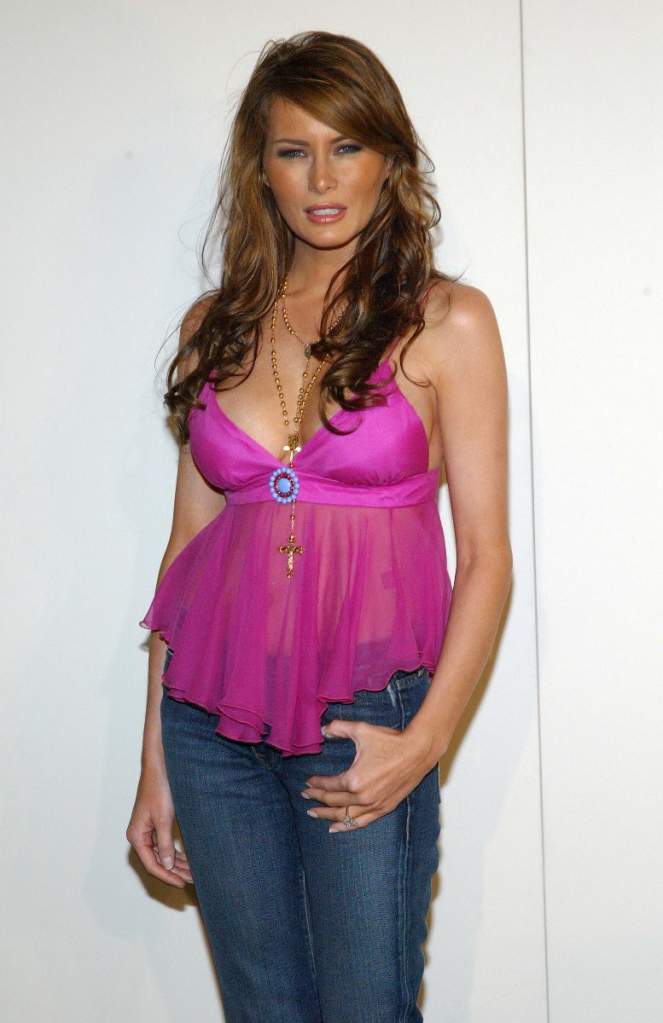 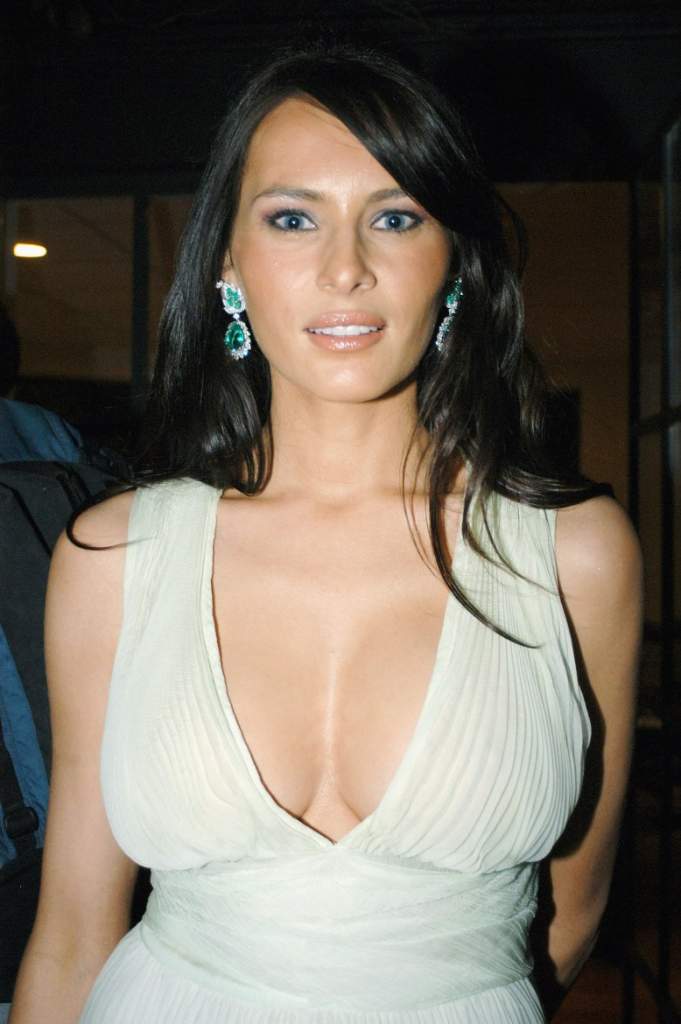 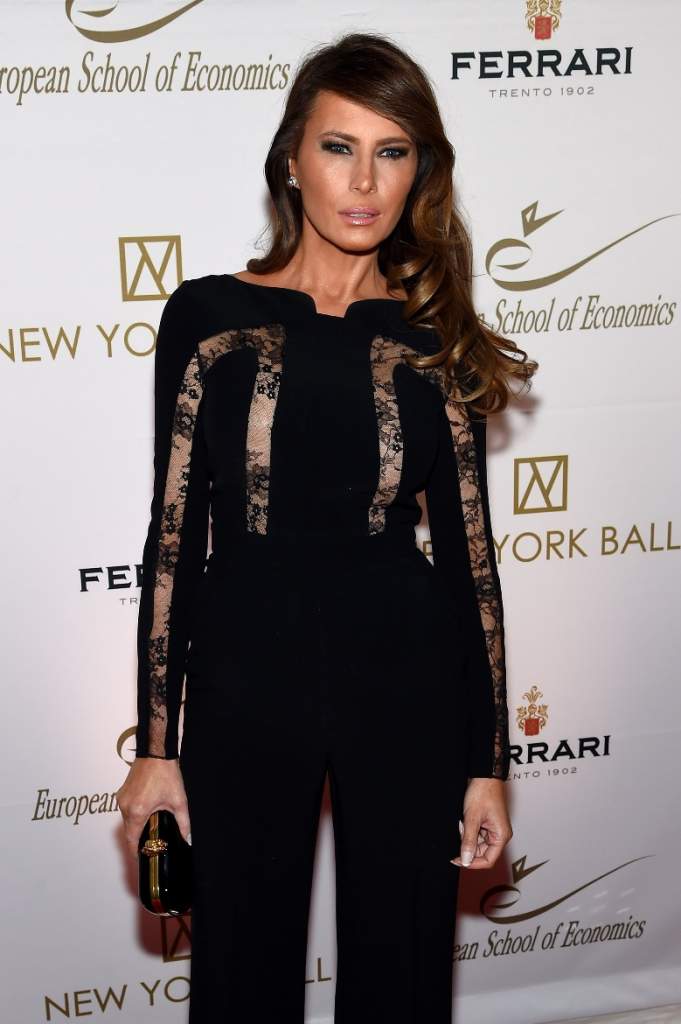 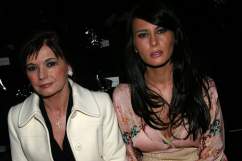