President Donald Trump’s Press Secretary Sean Spicer was confronted by an education advocate named Shree Chauhan in an Apple store and peppered with a string of questions, including: “How does it feel to work for a fascist?

Spicer initially responded, “We have a great country” and appeared like he was trying to ignore the woman, even keeping a smile on his face. However, she kept it up.

You can watch the video of the Washington D.C. confrontation above. Chauhan tweets as @shreec. Her profile describes her as “Education advocate. Eternal optimist. Art lover. Arc bender. Firenzephile. Feminist. Fearless. Patriot. Slayer.” She was identified as Shree Chauhan by the site ShareBlue.

“How does it feel?” Chauhan asked in the video she streamed to Periscope and posted to Twitter. She wrote in the tweet that accompanied the video: “Asking @PressSec questions in Apple Store since he doesn’t like the press.” The confrontation occurred on March 11.

In a column on Medium.com, Chauhan explains, “From very early on, I knew that Donald J. Trump was dangerous for America and had fascist tendencies. His views on people of color, immigrants and Muslims are abhorrent. His actions against women are despicable. His willful disregard for our Constitutional rights is well, fascist.”

Asking @PressSec questions in Apple Store since he doesn't like the press. https://t.co/l493z2gG4x

In the video, Chauhan continues:

“It’s such a great country that allows you to be here,” responded Spicer in a comment drawing him some criticism on Twitter.

Chauhan continued on. At one point in the video, Spicer talks to another man and again tries to ignore her.

“Thank you very much,” Spicer says to someone in the room.

Eventually, Spicer walks out of the store.

Sean Spicer has his own "macaca" with an American woman of brown skin, telling her she's lucky to be in America. https://t.co/GmfnodXUCQ

She also pointed it out:

Really surprised that you don't have a comment for what Mr. Spicer did say, which was "Such a great country that ALLOWS you to be here." https://t.co/GkmHIA8HJE

Chauhan has also responded on Twitter to people criticizing her approach:

Thank you for your hot take Scott. https://t.co/clQfsjQLmY

ShareBlue asked Chauhan, whom the site says is of Indian descent, “how she interpreted Spicer’s remark — whether ‘be here’ was in reference to her being in the Apple Store or being in the United States — she confirmed that she felt he meant allowed her to be in this country.”

She pinned this tweet at the top of her page:

We blocked @BetsyDeVosED at Jefferson Academy. 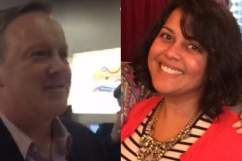 Loading more stories
wpDiscuz
26
0
Would love your thoughts, please comment.x
()
x
| Reply
Sean Spicer was confronted in an Apple Store by a woman named Shree Chauhan, who unleashed a stream of questions, including asking how it feels to work for a fascist. Watch video.