Thirteen people died when a pickup truck crashed into a church minibus in Texas, and one woman – the lone survivor among her group – is still recovering in the hospital.

The victims’ stories and photos are becoming known; the stories range from a woman who prepared church band folders for the choir to a mother of three who declared on social media, “I love my life!” Family and friends have flooded social media with tributes to the victims, remembering their strong faith.

Authorities say the pickup driver, Jack Dillon Young, 20 – who survived – may have veered across the center line, and one news report said a motorist had called 911 to report reckless driving right before the crash.

The victims were all members of First Baptist Church in New Braunfels. Here’s more about each one of their lives:

Harris is the sole survivor from the church minibus. She is recovering in a hospital.

A friend wrote the morning after the crash, “UPDATE AS OF 8:44am this morning, 3/30/17
Rose is in good spirits, devastated with the loss of 13 of her closest brothers and sisters is Christ, but is joyous in knowing the celebration with Jesus is where they are now at peace. Rose has broken bones and is very traumatized at personally witnessing the horrific incident. Please, continued prayers for healing, and continued prayers for family and friends of loved ones now in heaven. All my love to you beautiful people…i thank each of you.”

A friend wrote on Facebook, “Please pray healing for Rose Harris, the lone survivor from the First Baptist Church of New Braunfels bus crash yesterday. She is a very sweet and loving lady, I had Thanksgiving and Christmas dinner with her.”

The other victims have died:

On her Facebook page, Rhonda Allen (above left) described herself as “Mother of 3, grandmother of 5 (all girls). Part time Hospice Nurse. I love my life!”

She wrote that she worked at Gentiva, went to Sam Rayburn High School, lived in New Braunfels, Texas, and was from Pasadena, Texas. She recently went on a trip to Branson, Missouri.

A woman who knew Allen wrote, “Rhonda Allen, what a kind and loving soul?. I was very blessed to have known you??.”

Friends remembered Hawkins for her love of square dancing.

“Yesterday we lost a very good friend and Square Dancer. Her name was Donna Hawkins,” wrote one friend on Facebook. “She lost her life in a horrific bus accident in Texas along with 12 others. She was returning from a religious retreat when their bus was hit head on. Donna was the consummate Square Dancer. She was always supporting the activity. She danced often, and was a club president, CA State council historian (always with a camera in her hand!) and so much more. When Donna was at a dance everyone knew it! If there is such a thing as the “Life of the Dance” Donna was it! Who could forget her ‘All girls Squares.’ Rest in Peace Donna I and so many others will miss you so much!”

Barrett was driving the church mini bus. According to PinkArmadillo.com, Barrett was married with three children and “was a semi math teacher who also worked at Schlitterbaun. He studied Business Administration at Texas State University.”

The daughter of Barrett wrote a heartbreaking tribute to her father. It said, in part, “Yesterday my father’s death, along with the death of 12 other members of his church, shook me in a way I have never been shaken before. I love my mom, but I was always a daddy’s girl. I remember 5am coffee and coco (he had coffee; I had coco). We were both early risers and would enjoy that special time before my siblings and mom would wake up. I’d be rubbing sleep out of my eyes but dad had already been up praying and reading his bible.”

One woman wrote on Facebook, “Wow. RIP Mr. Murray Barrett. He was a teacher when I was in school. My prayers go out to all the families that lost their loved ones. ???” Another woman wrote, “Our family personally knew Murray Barrett, one of the victims. He was an amazing AWANA leader for First Baptist Church NB to all three of my children when we first moved here 10 years ago.”

According to The PinkArmadillo, “Howard lost his wife, Patricia, just last year. He now joins her and his son, Emmett Miles Allen, in Heaven.”

No photo of Allen has been released.

A church pastor called Rosamond an “amazing woman of God.”

“We are heartbroken to hear the sad news about Mildred Rosamond,” the pastor wrote on Facebook. “She was among those senior adults killed in the Bus crash near San Antonio. Mildred was an amazing woman of God who was always ready to encourage me and her whole church family.”

On Facebook, Rosamond described herself as “Retired and Loving It.” She lived in New Braunfels, Texas and was from Baytown, Texas.

She worked as a front desk receptionist at Memorial Baptist Church, reported ThePinkArmadillo.com. She previously worked for Baytown Sun Newspapers Group, according to her Facebook page.

One of her only public Facebook posts was this Bible saying:

Schmeltekopf was remembered for preparing band folders and singing in the church choir.

One woman wrote on Facebook, “Words cannot express how sad I am in the passing of Miss Addie who I dearly loved and cherished the friendship we had.” A friend wrote on Facebook, “Addie Schmeltekopf was a dear lady and precious friend. Besides singing in our church choir, she also volunteered each week to prepare band folders for Wednesday night rehearsals. She let us know this week that she would be participating in this retreat, would not be there yesterday afternoon, but would be there for choir rehearsal last night.”

Tysdal’s granddaughter wrote a tribute for her grandmother on Facebook. Tysdal’s husband had recently passed away.

The granddaughter wrote: “As many of you may have heard or seen, there was an awful wreck in San Antonio this afternoon and I’m sadden to say that my Gram was one of the 13 that did not make it back to the First Baptist Church. However, I can confidently say she made it into Heaven and left singing praises. This woman was so strong in her walk with Christ and I looked up to her in too many ways to count. Please keep our family in your prayers as well as the other families, particularly my dad, Dustyn. God has a plan and He makes all things work together for good.”

She added, “Gram, I guess Grandfather didn’t want to see the Majesty of the Kingdom with out the woman who pulled him back in and was there by his side in sickness and in health. I’m so sorry you had to go this tragically but I know you are in peace which gives me peace. I love you and Grandfather dearly and I’m thankful for the role you two played in my life.”

A friend wrote on Facebook of Tysdal, “The names of those who perished in yesterday’s tragedy have been released. I only personally knew one of the saints called home to glory but I grew to develop a quick bond with Sue Tysdal. Her husband, Darryl, only recently passed away. My heart goes out to all those that form the body of Christ, especially to the Tysdal family. Just last Sunday Sue and I were talking about having me over to the house for a visit with her and her son Dustyn.”

A relative of Walker asked for prayers, writing, “Please be in prayer for the children of my mom’s youngest sister, Martha Walker, who was killed in the church bus crash outside of San Antonio yesterday, and the families of First Baptist Church of New Braunfels.”

No photo has been released yet of Vulliet. Her most recent public post on Facebook is of her nephew’s grave, with the post, “I join you in paying tribute to all our veterans. It brought tears to my eyes to see Gary’s grave marker. Such a beloved nephew to me!!”

According to their obituary, “They lived together, served together and died together. Harold Boyd Barber, 87, and Margaret Jo Robinson Barber, 82, went home to be with the Lord on Wednesday March 29, 2017. While a tragic departing, one can see God’s grace and mercy intertwined in the details. Harold and Jo were members of First Baptist Church of New Braunfels and served God though building mission churches, hosting a weekly Bible study in their home, working in the church kitchen, volunteering at the local food bank, visiting those in nursing homes, distributing Bibles with The Gideons International, and so much more.”

A friend posted on the Willow Meadows Baptist Church page, “among those who were killed are Harold and Jo Barber, former WMBC members.

A friend wrote on Facebook of Moore, “Cristie was a very nice lady I had the privilege of knowing while working at BAMC (Brooke Army Medical Center, Fort Sam Houston, TX). You’re in the arms of our Savior and home at last. My prayers and deepest condolences to the families of these angels who took flight.”

This post will be updated as more is known about each victim. 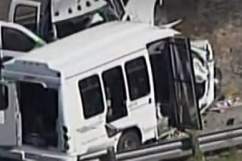