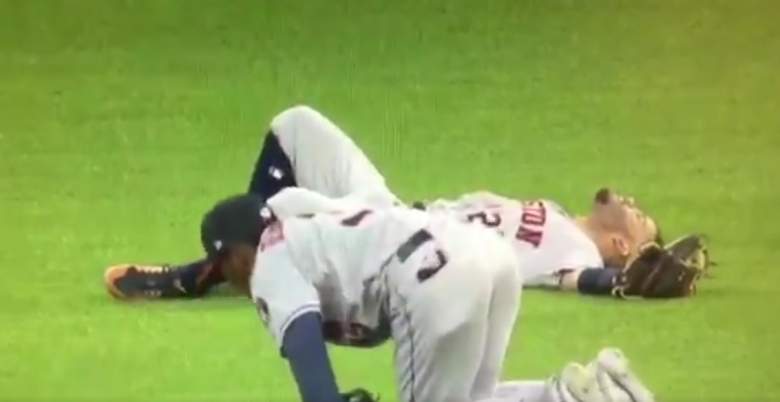 Jose Alutve and Teoscar Hernandez had a scary incident in the Cleveland outfield during a game Tuesday night.

The two Houston Astros players were chasing down a bloop flyball to shallow right field in the 8th inning when Altuve looked up with his back to the ball. Hernandez was running at the ball with a full head of steam and was unable to slow down his full sprint. Hernandez’s outstretched forearm struck Altuve in the head, appearing to clothesline him as they both fell to the ground.

Altuve and Hernandez laid on the ground in pain as Houston’s trainers moved in to check on them.

Watch a video of the scary incident below:

Both players left the game due to unspecified injuries suffered in the collision, with Hernandez exiting on a medical cart.

After the game, Astros Manager A.J. Hinch said that Altuve is OK after the collision and should be ready to play in Wednesday’s game. He didn’t suffer and injury of any kind and was removed from the game as a precaution.

Hernandez said his lower leg — below his knee — was a little banged up, but nothing was broken. He added that if all goes according to plan, he intends on return to the lineup “in a couple of days.”

Hernandez on what is a lower-leg injury pic.twitter.com/UorakH4A08

The 27-year-old second baseman is coming off his best season yet for the Astros. He finished the 2016 season posting career-best numbers in batting average (.338), RBIs (96) and home runs (24).

Hernandez, on the other hand, was called up to the main roster just hours before the game. With Jake Marisnick on the seven-day disabled list with a concussion, Houston called on Hernandez to fill the void. He appeared in 41 games for Houston last season in his first big-league action, but batted just .230. He brings decent power at the plate, though, with a .420 slugging percentage for 2016.

Read More
Baseball, Houston Astros, MLB
wpDiscuz
0
0
Would love your thoughts, please comment.x
()
x
| Reply
The Houston Astros' Jose Altuve and Teoscar Hernandez had a scary collission in center field in Cleveland on Tuesday. Watch the video of the incident.