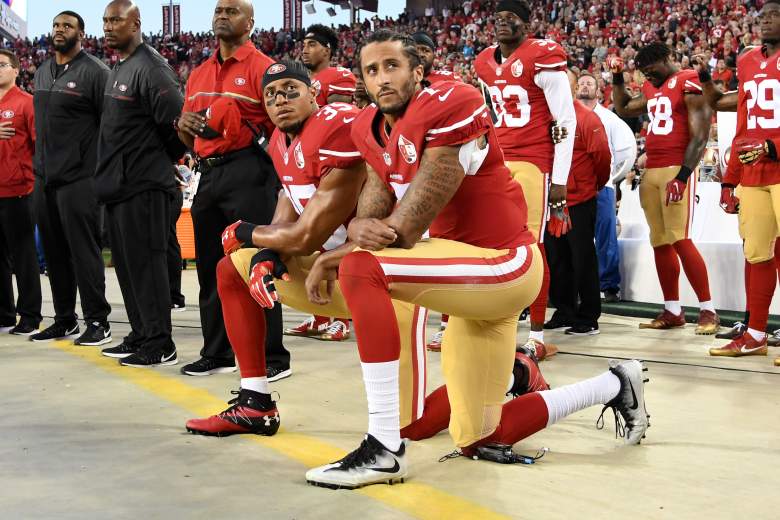 Colin Kaepernick is still without a job for the upcoming NFL season, but does it have to do with his play on the field? (Getty)

Fitzpatrick — who has played for six NFL teams over the course of his 12-year career — was handed a one-year, $3 million deal, according to ESPN’s Adam Schefter. This, after coming off a year with the New York Jets in which Fitzpatrick started 11 games, went 3-8, and threw 17 interceptions compared to just 12 touchdowns. Again, no big deal — he’s just going to be a backup.

But let’s look at the entire free agency quarterback landscape here: with Fitzpatrick agreeing to terms with Tampa Bay, that leaves only two (if you don’t include recently retired Jay Cutler) quarterbacks with significant NFL experience without jobs. The first — Robert Griffin III, who has started just 12 games over the past two seasons due to numerous injuries, tossing just six touchdown and throwing nine interceptions.

The other? Yes, Colin Kaepernick — the former San Francisco 49ers star who appeared in a Super Bowl just four years ago.

Yes, and the football player who knelt during the National Anthem throughout the entire NFL season in 2016.

It’s been well-chronicled why Kaepernick refused to stand for the anthem and all of the backlash, as well as support, he received for doing what he did. It should be noted that Kaepernick reportedly will stand in 2017 — as he feels there has been positive change since he began his protest. But that, of course, assumes he has a team to play for.

With the Fitzpatrick signing today and NFL training camps just around the corner, that assumption would not be a wise one to make.

While the league and the NFL Players Association won’t comment on the matter, there has been growing thought that Kaepernick is being blackballed by NFL teams.

Back in March, Bleacher Report’s Mike Freeman set out to find out what exactly was going on with Kaepernick and the lack of interest being shown by teams with obvious quarterback needs.

One AFC general manager told him, “Some teams fear the backlash from fans after getting him. They think there might be protests or [President Donald] Trump will tweet about the team.”

Later that month, President Trump did reference Kaepernick at a rally in Louisville, Kentucky, saying “They don’t want to get a nasty tweet from Donald Trump. Do you believe that?”

That same general manger went on to tell Freeman, “The rest genuinely hate him and can’t stand what he did [kneeling for the national anthem]. They want nothing to do with him. They won’t move on. They think showing no interest is a form of punishment. I think some teams also want to use Kaepernick as a cautionary tale to stop other players in the future from doing what he did.”

Is that what you would call a blackball?

It might be useful to take a look at Kaepernick’s numbers from last season — in which he started 11 games — and compare them with some of the quarterbacks who have been picked up by NFL teams this offseason, and then you can decide for yourself.

Chase Daniel Philadelphia Eagles 2016 Preseason HighlightsWith the recent trading of Sam Bradford to the Vikings, Chase Daniel a backup quarterback will look to have his chance to prove that he could start in the league. I personally want Wentz to get in and play as soon as possible, but until then, hope Chase can play better than he ever has,…2016-09-03T16:18:25.000Z

Note: Daniel only appeared in one regular season game in 2016, so here are his career numbers:

Read More
Kaepernick, NFL
Colin Kaepernick is still a free agent but does the reason behind that go way beyond the playing field?