A CBS Boston reporter has apologized after he joked about Ariana Grande’s music following an explosion at one of her concerts. On May 22, loud bangs were heard at Grande’s concert in Manchester, England. At the time of writing, 19 people have been confirmed as dying while more than 50 were injured. It has been reported that the explosions may have been caused by nail bombs. Gaming writer David Leavitt tweeted in the midst of the confusion, “MULTIPLE CONFIRMED FATALITIES at Manchester Arena. The last time I listened to Ariana Grande I almost died too.”

1. Leavitt Has Apologized Saying He ‘Didn’t Realize the Magnitude of the Tragedy’

In a tweet after the firestorm, Leavitt wrote, “Sorry 4 offending. Didn’t realize the magnitude of the tragedy. I always make stupid jokes about whatevers trending. Condolences 2 families.” He then made jokes about living life without a cell phone or the internet. Then, Leavitt announced that the controversial tweet had been removed.

2. Leavitt Attracted the Ire of Conservative Twitter in November 2016 When He Made a Joke About Trump Dying

Following Trump’s November 2016 presidential election victory, Leavittt attracted the ire of one half of Twitter. In responding to the hashtag, “CalmMeDownIn3Wods,” Leavitt wrote, “Trump died sleeping.”

At that time, CBS Boston said that Leavitt did not work for the station:

3. Fellow Gaming Writers Believe that Leavitt’s Career Is Over

.@David_Leavitt does not work for @CBSNews.

Despite his apology, Leavitt’s colleagues are not buying the remorse with some speculating that his career could be over. According to his Twitter bio, Leavitt writes for CBS Boston, Yahoo and the Examiner.

The Boston affiliate of CBS has also distanced themselves from Leavitt saying, “David Leavitt is not a WBZ employee. His abhorrent comments in no way represent the views of our station.”

Here is some of the heat that Leavitt is receiving:

While Fox Memphis anchor Darrell Greene tweeted at Leavitt regarding a shooting in Tennessee:

@David_Leavitt BREAKING: Several shots fired during a vigil in South Memphis. @ZachCFOX13 was there. He and dozens of others had to run for cover. pic.twitter.com/PBVIs2mLxh

4. Leavitt Has a Bachelor of Arts in Humanities

According to Leavitt’s CBS Boston profile, he primarily writes about things to do in the city. His headlines include, “Boston’s Best Middle Eastern Food” and “Best Skydiving Near Boston.”

While on his Facebook page, Leavitt adds that he holds a Bachelor of Arts in Humanities and Social Sciences from the University of Massachusetts Dartmouth. Leavitt brags that he has written over 3,000 articles during his career. He says that gaming has been a major part of his life since he was 5 years old.

5. The Ariana Grande Explosion Is Being Investigated as a Terrorist Incident

Terrorism cops in the United Kingdom are investigating the Ariana Grande concert explosion as a terrorist incident. Sources told the BBC’s Daniel Sandford that, “Senior national Counter-Terrorism officers are assembling in London.” Sandford had earlier tweeted that “The North West Counter Terrorism Unit is treating the incident at #ManchesterArena as a possible terrorist incident.”

So far, Manchester police say that 19 people have been killed and 50 people have been injured. NBC News reports that the explosion could have been the work of a suicide bomber. While the network’s Pete Williams says that there is “increasing confidence among investigators” that the bomb was a backpack bomb. 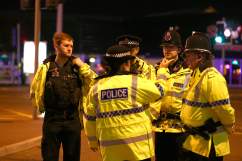 Loading more stories
wpDiscuz
36
0
Would love your thoughts, please comment.x
()
x
| Reply
A CBS Boston reporter has apologized after he joked about Ariana Grande's music following an explosion at one of her concerts.