Terrorism cops in the United Kingdom are investigating the Ariana Grande concert explosion as a terrorist incident. Sources told the BBC’s Daniel Sandford that, “Senior national Counter-Terrorism officers are assembling in London.” Sandford had earlier tweeted that “The North West Counter Terrorism Unit is treating the incident at #ManchesterArena as a possible terrorist incident.”

So far, Manchester police say that 19 people have been killed and 50 people have been injured. NBC News reports that the explosion could have been the work of a suicide bomber. While the network’s Pete Williams says that there is “increasing confidence among investigators” that the bomb was a backpack bomb.

The Sun’s Tom Newton Dunn has speculated on Twitter, citing National Health Service sources, that the attack was a nail bomb attack. In the 1990s, nail bomb attacks were the trademark of white supremacist terrorists in the United Kingdom. Most notably, David Copeland, who planted bombs in Brixton, the East End and Soho neighborhoods of London.

CBS News reporter David Begnaud says that there “were two explosions at the Ariana Grande concert in Manchester… the devices contained nails.”

In December 2016, it was reported that a 12-year-old boy had plotted to blow up a Christmas market in Germany under the possible direction of ISIS. 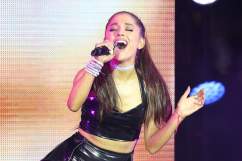