A 16-year-old girl has been arrested and accused in the hacking to death murder of a “gentle and kind” Uber driver just after Memorial Day. The Lincolnwood Police Department says that Eliza Wasni was arrested on May 30 and will appear in court on May 31 in Skokie. On the night of May 29, Grant Nelson’s family say he had finished dinner and was going out to make some extra money as an Uber driver. In the early hours of May 30, Nelson was found stabbed inside his car in Lincolnwood. He was rushed to St. Francis Hospital in Evanston, Illinois, where he was pronounced dead. Nelson was 34 years old.

1. Authorities Say Wasni Was Found With 2 Weapons Believed to Have Been Used in Nelson’s Murder

In a press release, the Lincolnwood Police Department said that when officers found Nelson, at 3:22 a.m. on May 30, he identified his passenger as his assailant.

Authorities arrested Wasni close to where Nelson was found. Wasni had tried to drive Nelson’s car away from the scene but shortly after taking off, she hit a median and abandoned the car. Wasni was in possession of two weapons, one of which was a machete, that cops think were used to kill Nelson. After being confronted by officers, Wasni refused to co-operate and was tased. The Chicago Tribune reports that Wasni was wearing just a bra and leggings when she was found. Officers recovered a Chicago Cubs t-shirt that was covered in blood close by.

Cops were dispatched to the area after a resident reported hearing a man screaming for help. Those screams were relayed in court as being, “Help me! I’m going to die.”

Cook County prosecutors said during Wasni’s hearing that Nelson had been her third Uber driver on the night of the attack, according to ABC Chicago. Prosecutors said that there is Walmart surveillance video showing Wasni walking around “nonchalantly” before stealing two knives.

Nelson had been driving his gray 2015 Hyundai Sonata sedan when he was killed. NBC Chicago reports that there is “grainy” surveillance video that showed the Nelson’s car stopped with someone walking out of it at Hampton Place Condominiums around the time of the attack.

Nelson’s father has described the killing as random, according to CBS Chicago. A Go Fund Me page has been set up to help contribute to the causes that Grant Nelson loved so much. You can donate here.

2. Wasni Says on Her Facebook Page, ‘I Will Always Be Myself’

Wasni says on her Facebook page, “I will always be myself.” While her last visible update (above) read, “Ok ok that jus changed everything.” That post was written on February 13.

Wasni has a profile at Kids Casting, a social media website for aspiring actors. Wasni’s Instagram page has been taken offline while her Twitter page offers little information other than her location of Chicago.

The Chicago Tribune reports that Wasni is a student at Taft High School and lives with her mother who is a single parent.

Taft High School Principal Mark Grishaber told DNA Info that Wasni was enrolled at his school in February 2017 for nine days. Grishaber said that Wasni’s “case manager” said that the teen shouldn’t have been allowed to enroll and that she and been “in and out of therapeutic hospitals.”

3. Nelson Was Known for His Love of Animals

Grant Nelson’s sister, Alex, told NBC Chicago about her brother’s love of animals. Alex Nelson said that he was especially in love with her family’s dog, Lilly. Alex Nelson added, “He had probably the most extensive collection of classical music of anyone I’ve ever met in life… I want people to know Grant was a good person. He was not a vindictive person. He was not a cruel person. He didn’t deserve this fate.”

While a friend, Mike Foley, told ABC Chicago, “It’s overwhelming, really. It’s very sad. Heartbreaking.” Foley said that Nelson worked in the restaurant industry and also drove part-time for ride share companies. Another friend, Colleen Milner, told the station, “Grant’s the type of person that would walk away from an altercation. He would never stay around. He would let something go and walk away.”

According to his Facebook page, Nelson lived in Wilmette with his parents. He graduated from New Trier High School in Winnetka and the University of Colorado Boulder.

A spokeswoman for Uber paid tribute to Nelson saying:

We are heartbroken by the lost of one of our partners. Our deepest sympathies and prayers are with his family and loved ones during this incredibly difficult time.

We’re horrified by these reports and our thoughts are with those impacted. This type of violence has no place in our society. Our trust and safety team is looking into these reports, and we stand ready to assist law enforcement in their investigation. While the individual identified by police has driven for Lyft, there was no ride at the time of the incident.

Wasni was in violation of Uber’s policy that users must be over the age of 18.

4. Illinois Is No Longer a Death Penalty State

The Cook County state’s attorney’s office has said that Wasni will be charged with first degree murder as an adult. As of 2011, Illinois is no longer a death penalty state. The maximum penalty in a first degree murder case is life in prison. During her initial court appearance on May 31, Wasni was denied bond.

5. This Is the First Homicide in Lincolnwood Since 2006

The scene of Nelson’s murder. (Screengrab via NBC Chicago)

It’s noted in the Lincolnwood Police Department’s release that the town has not experienced a murder since the 2006 murder of Lester McDurmon. In that case, Lester’s brother, James McDurmon was sentenced to 60 years in prison for the crime. 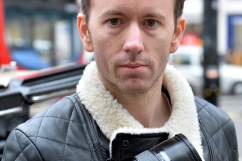 Loading more stories
wpDiscuz
186
0
Would love your thoughts, please comment.x
()
x
| Reply
A 16-year-old girl has been arrested and accused of the murder of a "gentle and kind" Uber driver on Memorial Day.