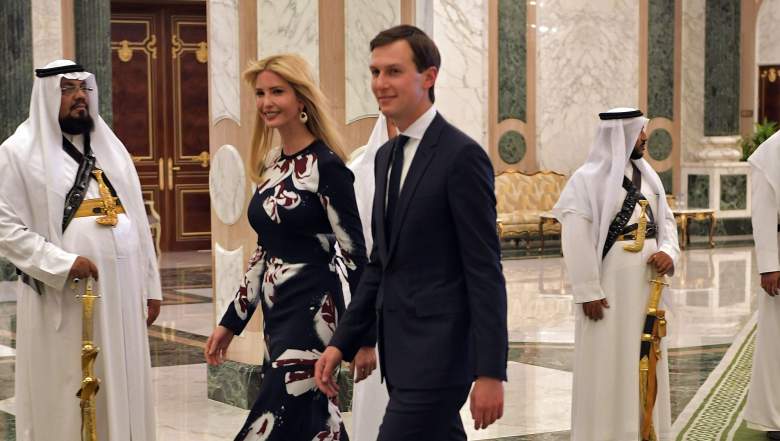 Ivanka Trump (C-L) and Jared Kushner (C-R) arrive to attend the presentation of the Order of Abdulaziz al-Saud medal at the Saudi Royal Court in Riyadh on May 20, 2017. (Getty)

The president’s daughter, Ivanka Trump, and her husband, Jared Kushner, accompanied the president on his first foreign trip. The first stop: Saudi Arabia.

Ivanka Trump joined her stepmother, First Lady Melania Trump, in skipping a headscarf, which is not required of western women in Saudi Arabia. She was photographed in Saudi Arabia wearing a modest and lengthy black (some said Navy), patterned dress. 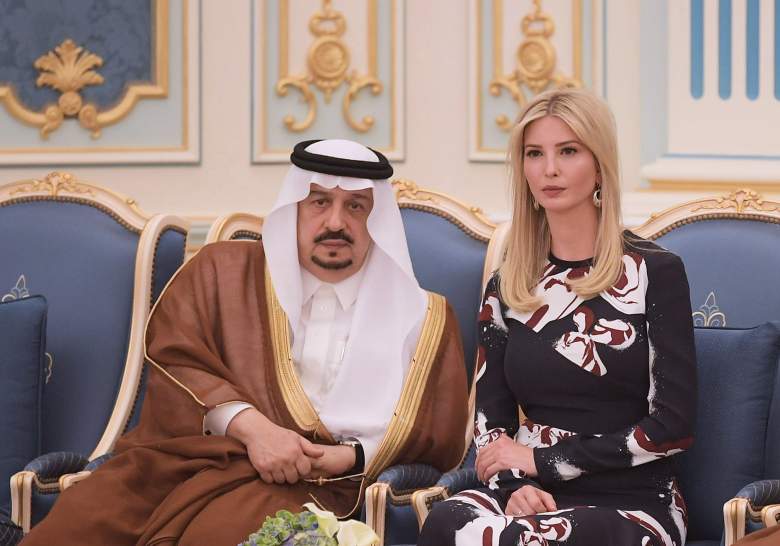 Ivanka Trump is seen at a ceremony where her father US President Donald Trump received the Order of Abdulaziz al-Saud medal from Saudi Arabia’s King Salman bin Abdulaziz al-Saud at the Saudi Royal Court in Riyadh on May 20, 2017. (Getty)

Donald Trump once tweeted criticism of Michelle Obama for not wearing a headscarf during a 2015 visit to Saudi Arabia, saying it had insulted the country’s leaders.

Many people are saying it was wonderful that Mrs. Obama refused to wear a scarf in Saudi Arabia, but they were insulted.We have enuf enemies

According to Arab News, Ivanka received praise from Saudi Arabians. “The hashtag #Trump’s_daughter, in Arabic, is the top trending hashtag in the country as Twitter fans heaped praise on the first daughter,” the news site reported. Others gushed over a mysterious “man in a red tie” who accompanied the delegation. Ivanka will participate in roundtable discussions on her own during the trip.

Donald Trump and his retinue are on a five-country multi-day foreign trip, according to the White House. Trump is expected to give a speech on radical Islam. 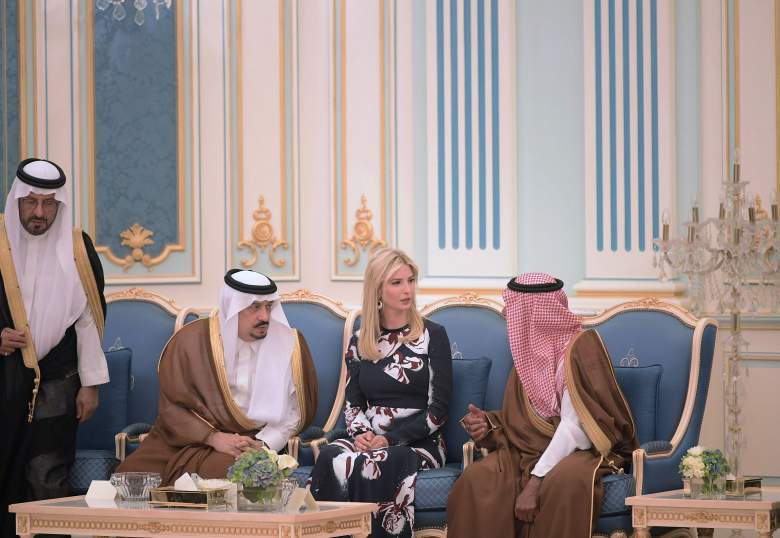 For her part, Melania Trump donned a black pantsuit with a wide gold belt as she accompanied her husband in Riyadh. 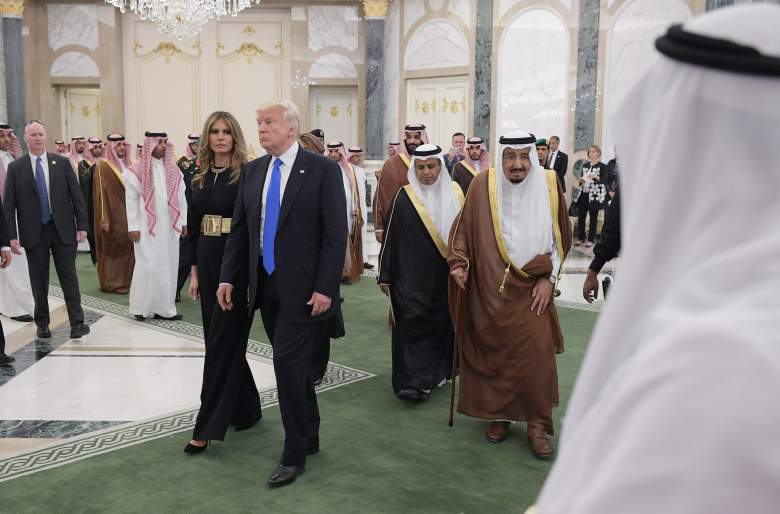 The Trumps are on an “eight-day, five-stop trek to the Kingdom of Saudi Arabia, Israel, Rome, Brussels, and Sicily, returning to Washington, DC, on Saturday, May 27, 2017,” the White House announced. 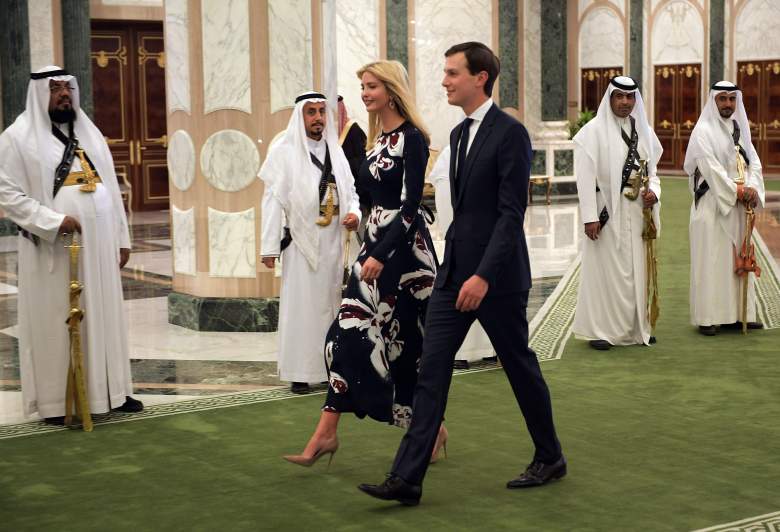 In addition to Ivanka Trump and her husband, Jared Kushner, other high-level staff members have also accompanied the president on the foreign trip, such as aide Steve Bannon and Chief of Staff Reince Priebus. Various communication officials are also on the trip. 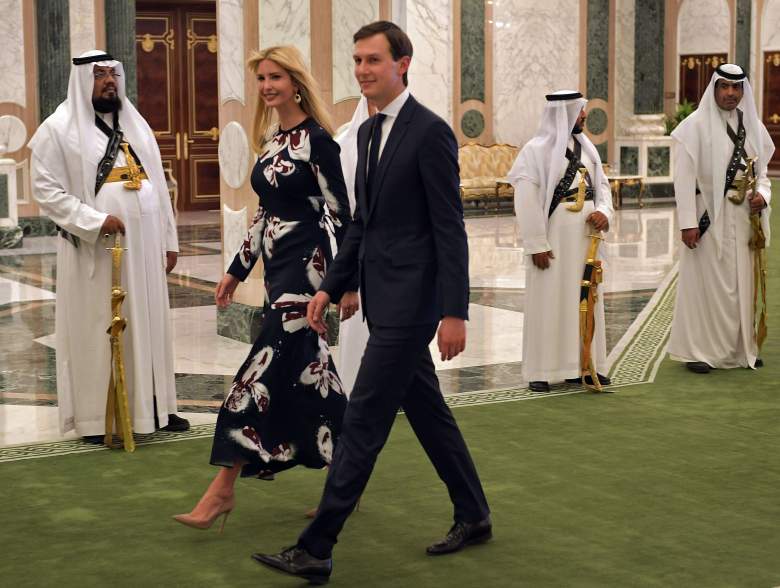 Ivanka Trump (C-L) and Jared Kushner (C-R) arrive to attend the presentation of the Order of Abdulaziz al-Saud medal at the Saudi Royal Court in Riyadh. (Getty)

Ivanka also wore a patterned dress as she left Washington. 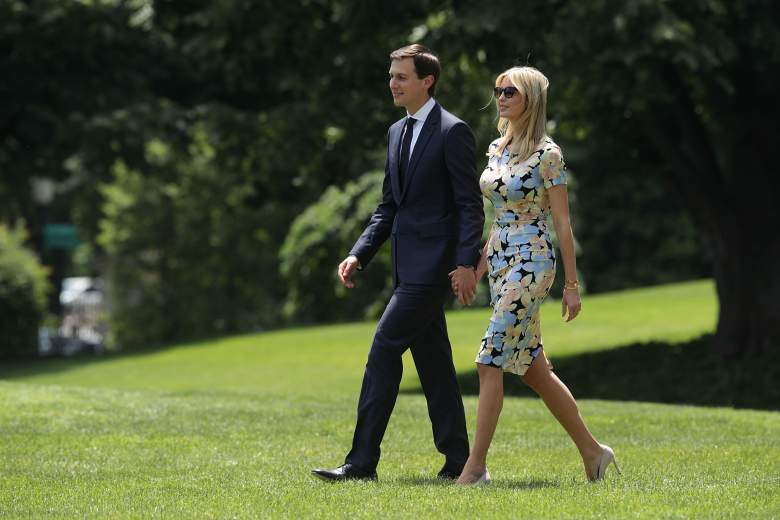 Ivanka Trump, daughter and assistant to U.S. President Donald Trump, walks with her husband, White House senior adviser Jared Kushner, on the South Lawn prior to their departure from the White House May 19, 2017 in Washington, DC. President Trump is traveling for his first foreign trip to visit Saudi Arabia, Israel, Vatican, and attending a NATO summit in Brussels, Belgium and a G7 summit in Taormina, Italy. (Getty)

The trip comes as a new controversy swirls after a report in The Washington Post that a current White House official close to Trump is a “person of interest” in the probe into whether Trump’s campaign colluded with Russian interference into the 2016 presidential election. The Post did not name the person of interest. However, it’s the first indication that the Russian probe is targeting a current official rather than past campaign officials with whom Trump has already parted ways. 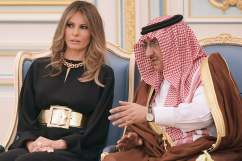