A series of NJ Transit, LIRR and Amtrak delays and cancellations at Penn Station have resulted in angry and frustrated travelers who say commutes have become intolerable.

Many commuters have posted photos on social media that feature inconvenienced and burgeoning crowds. The problems grew so bad on May 10 that the commute was deemed “unbearable” and “nightmarish,” and police were called.

@NYGovCuomo What about #lirr issues? What about the commuters? Every night! People can get hurt from crowding & fighting! We want a Refund!

Please don't blame the conductors on the #lirr trains or the police – it's not THEIR fault that these situations are occurring. pic.twitter.com/mN8rVzrV0Q

Problems on the LIRR have been simmering for some time, but, on May 10, they escalated to the point where police temporarily blocked access to parts of Penn Station in New York City, according to NBC New York.

That’s because the crowds were growing inside as more and more delays were reported.

MTAPD continues to restrict access to Penn Station due to crowding conditions caused by signal problems in one of the East River Tunnels.

“Crowds of commuters swelled so much that police had to block off some of the entrances to the busy station during Wednesday’s evening rush,” the television station reported.

NBC New York said police acted because of “severe overcrowding” and were seen using bullhorns to control the crowds.

2. Nearly 80 Trains Were Cancelled During the Height of Rush Hour

@AlfonsoReports please come cover the rally at RVC this Saturday and support the LIRR riders!!! We need your help! pic.twitter.com/6jOL710mpH

Although there have been a series of problems, the delays and cancellations on May 10 were the worst in years, according to Newsday.

The news site reported that 80 trains were cancelled during the peak of rush hour. The problem was widespread.

Massive #LIRR delays at #PennStation #commuters not being allowed in because of overcrowding in terminal #nbc4ny pic.twitter.com/R5Qgl9cikY

Newsday reported that, on May 10, the LIRR “ran no trains into and out of Penn on half its lines — directing Long Beach, West Hempstead, Hempstead and Far Rockaway customers to travel out of Atlantic Terminal instead. The railroad also, for the second time this week, suspended all westbound service into Penn for the duration of the evening commute.”

The LIRR posts updated information on current delays on its Twitter page.

Although the scope of the May 10 delays was larger than normal, CBS New York echoed others in writing that the LIRR problems were “an all too familiar occurrence.”

After 8 p.m. May 10, things were reported as close to normal, but there were still some delays. The official LIRR Twitter page on May 11 was full of delays.

“NJ TRANSIT reported trains in to and out of Penn Station were subject to delays of up to 60 minutes due to an Amtrak signal problem during the evening rush. Delays of 45 minutes persisted as late as 6:45 p.m.,” reported CBS New York.

Ballistic commuters – who say the problems have caused disruptions in their lives – have taken to social media to vent.

One Long Island woman said she waited for two hours and wouldn’t be able to have a scheduled dinner, according to the New York Daily News, which added that recent fare hikes are rubbing salt in frustrated commuters’ wounds.

Twitter pages devoted to LIRR problems have popped up. One is called LIRR#WeDeserveBetter and contains this profile, “Tweeting for a change in the @LIRR. Delays, Cancelations, Signal Problems the list is never ending.”

How is this not a safety issue? #LIRR @LIRR pic.twitter.com/koCMt9RiCG

4. The State Assembly Is Taking Up the Issue & More Than 200,000 Commuters Use the Trains Each Day

Problems with the LIRR are no small matter because of the large number of commuters the populous area serves: about 230,00 people every day.

ABC7 reported that some commuters complain the delays are daily occurrences, and the television station added, “Whether it’s track problems, signal problems, Amtrak problems or weather problems, the result is a crowded mess that starts at Penn Station.”

@LIRR ANOTHER DAY ANOTHER DELAY AGAIN! Cops denying entry. I Demand a refund on my monthly for garbage service! @LIRRoutrage @nypost pic.twitter.com/wyWqhOvpHW

According to Newsday, the N.Y. State Assembly’s Standing Committee on Corporations, Authorities and Commissions “is expected to grill Amtrak and LIRR representatives at Thursday’s hearing on the multitude of recent problems at Penn, which include two train derailments in just over a week.” Furthermore, Amtrak is planning to “take several tracks out of service for weeks at a time during the summer,” reports Newsday.

5. The Cause of LIRR Delays & Cancellations Varies

It’s not completely clear what’s causing all the problems. According to Newsday, “Amtrak, which owns and maintains Penn Station and the tunnels leading into the hub, said the problem was caused by a ‘dispatcher routing issue'” without being more specific.

News12 reported that “signal problems were to blame.”

Many of the LIRR posts on May 11 reported “equipment trouble” for continued delays. Other reasons given were “late-arriving equipment” and “late-arriving connection” and signal problems.”

The 11:39PM train from Penn due Babylon at 12:56AM is operating 21 minutes late due to earlier equipment trouble prior to departure.

More examples from May 10: 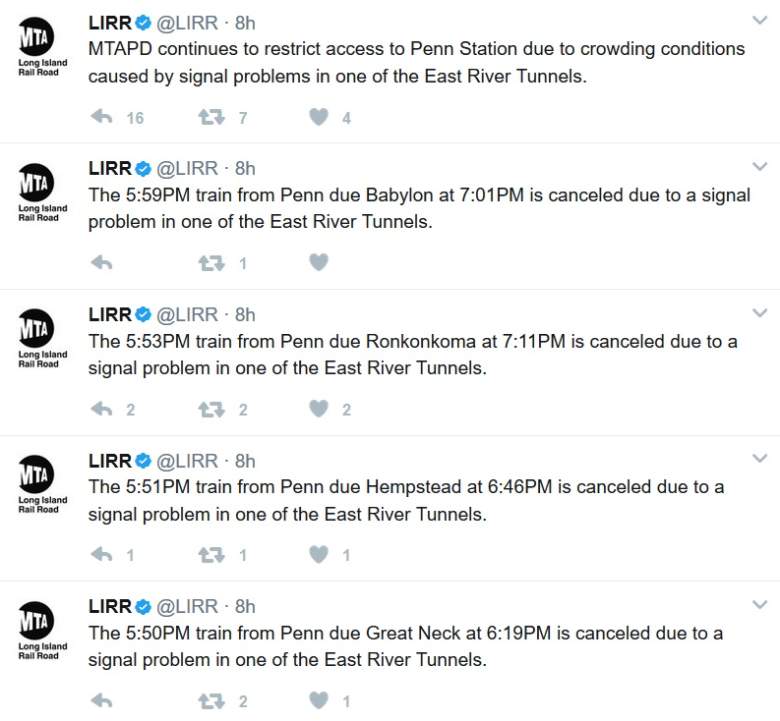 According to The New York Daily News, “MTA blamed a signal malfunction for canceling Long Island Rail Road trains heading east on four of its lines, with limited service out of Penn Station on four other branches.”

However, reported the Daily News, NJ Transit “suffered from delays up to 45 minutes at Penn because of a malfunctioning track switch and backups from speed restrictions” after a previous train derailment.