A couple views a large American flag set up on the National Mall, May 27, 2016, in Washington, D.C. Rolling Thunder members and supporters will participate in a motorcycle rally on Sunday afternoon in Washington. Rolling Thunder is an advocacy group that seeks to bring awareness to prisoners of war (POWs) and missing in action (MIA) service members of all U.S. wars. (Drew Angerer/Getty Images)

May 29 is Memorial Day in the United States. It is a federal holiday dedicated to remembering those who have died fighting for America while employed in the armed forces.

During Memorial Day, many people visit cemeteries and memorials dedicated those who have died in military service. Volunteers also place American flags on graves in national cemeteries. Memorial Day should not be confused with Veterans Day, which occurs on November 11 and honors the service of all U.S. military veterans.

Memorial Day is always the last Monday in May.

Learn more about the history and origins of Memorial Day here:

1. Decorating Graves Is an Ancient Custom

Wyatt McCain, 8, from North Pole, Alaska, looks upon his father’s grave at the National Cemetery on Memorial Day on May 28, 2012 in Arlington, Virginia. His dad, Army SFC Johnathan McCain, was killed by a roadside bomb in Afghanistan in November 2011. Wyatt came with his mother and three sisters to take part in a TAPS “Good Grief Camp.” Five hundred military children and teens, many of whom had a parent that was killed in the Afghan and Iraq wars, attended the annual four-day “Good Grief Camp” in Arlington, VA and Washington, DC, which is run by TAPS (Tragedy Assistance Program for Survivors). The camp helped them learn coping skills and build relationships so they know they are not alone in the grief of their loved one. They met others of their own age group, learned together and shared their feelings, both through group activities and one-on-one mentors, who are all active duty or former military servicemembers. Some 1,200 adults, most of whom are grieving parents and spouses, also attend the National Military Survival Seminar held concurrently with the children’s camp. The TAPS slogan is “Remember the Love. Celebrate the Life. Share the Journey.” (John Moore/Getty Images)

The decoration of the graves of fallen soldiers is an ancient one and was practiced by ancient Iranian peoples known as Medes, Persians, Grecians, and Romans. According to The Ladies’ Garland, Volume 6, the Persians adopted the custom from the Medes, the Grecians from the Persians, and the Romans from the Grecians. They write, “The tomb of Achilles was decorated with amaranth; the grave of Sophocles with roses and ivy; that of Anacreon with roses and flowrets.”

Other ancient cultures that practiced grave decoration include those of Java, China, Surat, and Libya.

These traditions usually occurred in spring and may reflect aspects of pagan rebirth festivals found globally around this time.

Cybele is an Anatolian fertility goddess that was later spread to the Greeks and Romans. The Roman holiday celebration for Cybele is known as Hilaria. Hilaria was celebrated on the March equinox to honor Cybele and her son/lover, Attis. Attis committed suicide by castrating himself right before his wedding to someone else. Cybele wanted to honor Attis’ life by ensuring that his corpse would never rot or decay. According to the Encyclopedia Britannica, “Attis was fundamentally a vegetation god, and in his self-mutilation, death, and resurrection he represents the fruits of the earth, which die in winter only to rise again in the spring.”

2. Grave Decoration Is Associated With the Civil War

The graves of a Union soldier with Confederate soldiers are shown at sunset at the Appomattox Court House National Historical Park April 7, 2015 in Appomattox, Virginia. (Win McNamee/Getty Images)

Soldiers graves were decorated prior to the Civil War, but the formalization of the practice occurred after the devastating war. Over half a million Union and Confederate soldiers died during the Civil War. According to Wars within a War: Controversy and Conflict over the American Civil War, the federal government began creating national military cemeteries for the Union war dead in 1865. The decoration of these graves was spearheaded by women.

However, some Southerners claim that Civil War grave decoration began in 1861 in Warrenton, Virginia, writes The Richmond Times-Dispatch newspaper in 1906. Another unsubstantiated claim includes that African-Americans started the tradition in Charleston, South Carolina, on May 1, 1865, writes the Charleston Daily Courier the New York Tribune.

Whatever the case, the “official” birthplace of what would become Memorial Day is Waterloo, New York. It was signed into law by President Lyndon B. Johnson in 1966 after a Congressional resolution.

Decoration Day emerged in the South following the conclusion of the Civil War. The practice started as early as 1865. The New York Times writes:

Columbus, Miss., was a hospital town, and in many cases a burial site, for both Union and Confederate casualties of Shiloh, brought in by the trainload. And it was in that Columbus where, at the initiation of four women who met in a 12-gabled house on North Fourth Street, a solemn procession was made to Friendship Cemetery on April 25, 1866… As the story goes, one of the women spontaneously suggested that they decorate the graves of the Union as well as the Confederate dead, as each grave contained someone’s father, brother or son.

Other stories of its emergence vary, but all include that the idea began with women. Another common origin of Decoration Day is Columbus, Georgia, which holds its inception about a year earlier than Columbus, Mississippi on April 16, 1865, writes The Myth of the Lost Cause and Civil War History.

The Civil War officially ended on May 9, 1865. However, the last battle of the Civil War was the Battle of Palmito Ranch in Texas on May 12 and 13. The last significant Confederate active force to surrender was the Confederate allied Cherokee Brigadier General Stand Watie, the only Native American general of the Confederate Army, and his Indian soldiers on June 23 in what is now Oklahoma.

4. It Was Copied in the North

Sgt. Iwona Kosmaczewska (L) and Pvt. 2 Wesley Defee (R), members of the 3rd U.S. Infantry Regiment, place flags at the headstones of U.S. military personnel buried at Arlington National Cemetery, in preparation for Memorial Day May 25, 2017 in Arlington, Virginia. “Flags-In” has become an annual ceremony since the 3rd U.S. Infantry Regiment (The Old Guard) was designated to be an Army’s official ceremonial unit in 1948. (Win McNamee/Getty Images)

On May 5, 1868, commander-in-chief of the Grand Army of the Republic, the veterans’ organization for Union Civil War veterans, General John A. Logan proclaimed that “Decoration Day” be observed annually and nationwide, writes Decoration Day in the Mountains: Traditions of Cemetery Decoration in the Southern Appalachians. It was observed for the first time that month on May 30. The date was chosen because flowers would be in full bloom.

After Logan’s proclaimation, states soon adopted the custom. The name slowly changed to “Memorial Day” in 1882, writes The Good Fight That Didn’t End: Henry P. Goddard’s Accounts of Civil War and Peace, but it didn’t become completely standardized until after World War II.

Eventually the name and date of Memorial Day was solidified on June 28, 1968 with the passing of the Uniform Monday Holiday Act by Congress. The act created the three day weekend.

5. It’s a Time of Remembrance

A teddy bear holding the photo of a soldier sits among the gifts left at the National Vietnam Veterans Memorial Wall during the Memorial Day weekend on May 24, 2009 in Washington. (SLOAN/AFP/Getty Images)

On Memorial Day, the flag of the United States is to the top of the staff and then lowered to the half-staff. It stays in this position until noon and is then raised to full-staff again, according to U.S. law.

This flag ceremony is usually held at cemeteries where veterans and families gather to honor the fallen and deceased. Parades are also held.

Following the publication of In Flanders Fields by Lieutenant Colonel John McCrae during World War I, silk poppies are worn in honor of those who have served and paid the ultimate sacrifice. 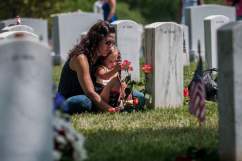 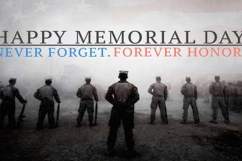 Memorial Day 2017: All the Memes You Need to See 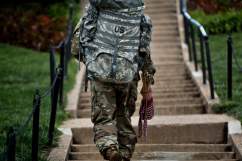 Read More
Air Force, Army, History, Marines, Memorial Day, Navy, United States
wpDiscuz
1
0
Would love your thoughts, please comment.x
()
x
| Reply
May 29 is Memorial Day in the United States. It is a federal holiday dedicated to remembering those who have died fighting for America while employed in the armed forces.