Michael Doherty, a 20-year-old Duke University student, vanished after a house party near his family’s home in Franklin, Massachusetts.

On May 20, a Boston television reporter tweeted that a body believed to be Doherty’s had been found. “Franklin PD says at 2:30 two people searching in dense woods and thick brush near Rt. 495 found body #NBCBoston,” wrote Perry Russon. He added that police say they believe the body is that of Doherty.

Michael Doherty’s cause of death is not yet clear.

A massive search effort had been launched to find Doherty, who hadn’t been seen since May 14. Authorities are even using a drone to locate the student. Friends told WBZ-TV that Doherty was “brilliant” and “everyone loves him.” 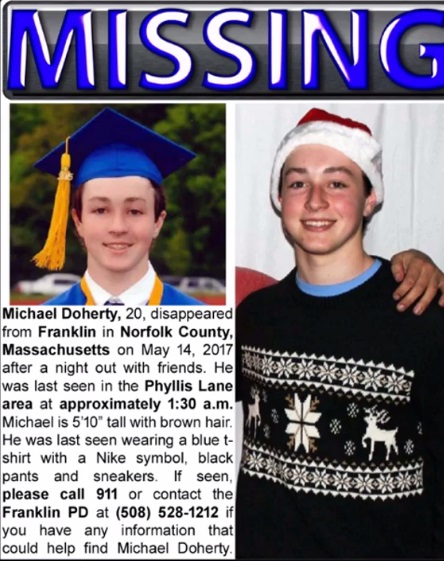 Items of the missing student’s clothing were found, a local television station reported. In the most recent development, a bloodhound tracked Doherty’s scent:

Residents of Maple St. in Bellingham have been asked to search their property after bloodhound tracked a scent to the area during search.

Other bloodhounds were called in to look for Doherty, and police said they don’t suspect foul play in the disappearance. They searched everything from marshes to dumpsters.

1 of the bloodhounds in #MichaelDoherty search. Reverse 911 to Bellingham residents after dog tracked to Maple & Pine pic.twitter.com/bYfjmR7EPL

1. Police Confirmed Doherty’s Body Was Found & Doherty Was Last Seen at a Gathering of Friends

Authorities are using a drone to aid in the search for Michael Doherty. @NBC10 pic.twitter.com/5yfKc0kRkp

In a Facebook post, the Franklin Police Department confirmed that a body was found. “At approximately 14:30hrs two civilians out searching in dense woods and thick underbrush near Rt. 495 located the body of a white male, believed at this time to be Michael Doherty,” police wrote. “Positive conformation will not be available until the Office of the Chief Medical Examiner has issued its findings.”

The last time anyone saw Doherty alive was at a gathering of friends near his family’s Franklin, Massachusetts home. He left around 1:30 a.m. on May 14, The Duke Chronicle reports.

Then, he disappeared. The trip from the party to his family’s home was only about a mile.

Some police / paramedics are now at a country club near where Michael Doherty is believed to have gone missing. Still no official updates. pic.twitter.com/8DmultjOXq

A friend told the Milford Daily News that Doherty declined offers for a ride, and that it was raining when he left the gathering of 20-30 college students who were celebrating being home for the summer.

In a news conference on May 17, Doherty’s parents said they were heartbroken and just want their son home.

2. Doherty Was Described as a ‘Rising’ Engineering Student

Doherty was well regarded at Duke, where he was involved in a fraternity.

According to The Duke Chronicle, he was “a rising junior in the Pratt School of Engineering.”

Doherty was also a member of Alpha Tau Omega fraternity, the campus newspaper reported. On Facebook, Doherty wrote that he had graduated from Xaverian Brothers High School. He didn’t have any recent public posts on the platform.

Friends told The Milford Daily News that Doherty was “an intelligent college kid who always played by the rules.”

They also told the newspaper it would be out of character for him to miss Mother’s Day; he vanished in the early morning hours of the holiday.

3. Fellow Students Are Using Social Media to Help Find Doherty & Many Have Joined in the Search

Still no updates from police as they search for missing Franklin college student Michael Doherty. Seems the whole town is out here. pic.twitter.com/lHGsa4bC3q

One reporter wrote on Twitter that it seemed like the “whole town” had joined in the search for Doherty.

Searchers combed through a golf course and wetlands looking for the missing college student.

The Duke Chronicle reports that some students have turned to the social media platform Reddit to try to find Doherty.

The search expanded to a muddy brook. Police said they are focusing on a “wooded, marshy area that they believe Doherty may have traveled through to reach his home more quickly,” reports the Milford newspaper.

4. One Report Says the Student’s Shirt & Shoe Were Found

Fueling the mystery: A report by WBZ-TV that some items of Doherty’s clothing have been found.

Friends told WBZ-TV’s Christina Hager “that Doherty’s T-shirt and a shoe were found Sunday in the area now being searched. A second shoe was found on the edge of a nearby golf course on Monday,” the television station reported.

The reported locations given of the shirt and shoe were contradictory. The items were found at the edge of the swamp, according to Boston Now.

5. Doherty Was ‘Coherent’ & ‘Talking’ When He Left the Party

Friends who saw Doherty at the party told WBZ-TV that he was coherent and talking and nothing seemed amiss.

They also said that he charged his cell phone before leaving. Friend Shawn Hanley told the Milford Daily News that “although some at the party were under the influence, Doherty seemed coherent and able to find his way home.”

Police have deployed K-9s, drones, and canoes in the effort to find Doherty.

Loading more stories
wpDiscuz
1
0
Would love your thoughts, please comment.x
()
x
| Reply
Michael Doherty, a Duke University student, who was missing, has likely been found dead, police say. He vanished after a party in Franklin, Massachusetts.