American flags are placed in the ground as part of the Donald W. Jones Flag Memorial June 13, 2003 in Fairless Hills, Pennsylvania. Sixty thousand flags will be placed in the size and shape of the Vietnam Veterans Memorial in Washington, D.C. in remembrance of the veterans of that war and Flag Day, which is June 14. (William Thomas Cain/Getty Images)

Flag Day is celebrated on June 14 in the United States. The date commemorates the adoption of the flag of the United States by the Second Continental Congress on June 14, 1777. The flag was called the Flag Resolution of 1777 and was the first of many iterations of what would become the American flag we recognize today.

Flag Day was first established by President Woodrow Wilson in 1914. Wilson was also the first president to recognize Mother’s Day and Father’s Day, the latter of which is this Sunday. However, Flag Day didn’t officially become established until 1949 by an act of Congress.

Flag Day is not a federal holiday. However, it is President Trump’s 71st birthday this year.

Learn more about the history and origins of Flag Day here:

1. Many Countries Have Flag Days

Flag Day is not unique to the United States and many countries have specific flag days. Dates of flag days vary across the world, but most dates were chosen to mark a significant national event like an independence day, a declaration of independence, an important military victory, the creation of the flag, or something similar to our Armed Forces Day.

The First Continental Congress was established as a response by Colonial Americans to the English Parliament’s passing of the so-called “Intolerable Acts,” which were a punishment for the Boston Tea Party. The Intolerable Acts were officially known as the Coercive Acts and, according to History.com, included:

The Boston Port Act, which closed the port of Boston until damages from the Boston Tea Party were paid.

The Massachusetts Government Act, which restricted Massachusetts; democratic town meetings and turned the governor’s council into an appointed body.

The Administration of Justice Act, which made British officials immune to criminal prosecution in Massachusetts.

The Quartering Act, which required colonists to house and quarter British troops on demand, including in their private homes as a last resort.

A fifth act, the Quebec Act, which extended freedom of worship to Catholics in Canada, as well as granting Canadians the continuation of their judicial system, was joined with the Coercive Acts in colonial parlance as one of the Intolerable Acts, as the mainly Protestant colonists did not look kindly on the ability of Catholics to worship freely on their borders.

The Second Continental Congress also met in Carpenters’ Hall starting in spring of 1775 and managed the colonial war effort, eventually leading to the Declaration of Independence on July 4, 1776.

2. Our First Flag Had No Stars

Prior to 1777, the flag of the British colonies in North America (pictured above) was known by a slew of names, including the Grand Union Flag, the Continental Colors, the Congress Flag, the Cambridge Flag, and the First Navy Ensign.

Like our modern flag, the Grand Union Flag had 13 stripes representing the thirteen colonies but did not have any stars. Instead, the upper inner corner contained the British Union Flag of the 18th century. The British Union Flag lacks St. Patrick’s cross because Ireland did not join with Great Britain until 1801.

The Grand Union Flag was adopted by the Second Continental Congress on December 3, 1775, and was first hoisted onto the colonial warship Alfred in the Delaware River.

One interesting anecdote about the Grand Union Flag is its similarity to the flag of the British East India Company. Both flags were nearly identical, with the latter sometimes varying between 9 to 15 stripes.

3. The Flag Act of 1777 Was a Response to American Indians Requesting an ‘American Flag’

The American Declaration of Independence adopted by the Continental Congress in Philadelphia with the future 1st President of the United States of America, George Washington present. Original Artwork: Engraving after a painting by John Trumbull. (Rischgitz/Getty Images)

According to The Stars and the Stripes: The American Flag as Art and as History from the Birth of the Republic to the Present, the creation of a new American flag was petitioned by an unnamed Native American tribe. The tribe also helped pay for the cost of the new flag’s creation by sending wampum along with the petition. Wampum were beads used by natives as money.

In response to the petition, Congress passed the Flag Act of 1777. It reads in the Journals of the Continental Congress:

Resolved, That the flag of the thirteen United States be thirteen stripes, alternate red and white; that the union be thirteen stars, white in a blue field, representing a new constellation.

The Flag Act of 1777 was passed on June 14, and that is why we commemorate this date to this day.

General George Washington and members of Congress consulting with Betsy Ross at 239 Arch Street in Philadelphia, where the first American flag is reputed to have been made. (Evans/Three Lions/Getty Images)

Betsy Ross, born Elizabeth Phoebe Griscom, is widely credited with making the first modern American flag in 1776. Folklore states it occurred after General George Washington visited her home at 239 Arch Street in Philadelphia. Ross was the wife of John Ross, a member of the Pennsylvania Provincial Militia. John was killed in the early stages of the war. What is known is that Betsy Ross worked in upholstery and helped war efforts by making tents and blankets.

The story of Ross and her presenting the American flag to Washington after he gave her a sketch of what he wanted didn’t become part of “history” until 1876 at Centennial celebrations of the American Revolution. Around that year Ross’s grandson, William J. Canby, wrote a research paper for the Historical Society of Pennsylvania claiming that his grandmother had made the first American flag. He wrote:

According to a well sustained tradition in the family of Elizabeth Claypoole (the Elizabeth Ross) this lady is the one to whom belongs the honor of having made with her own hands the first flag. Three of her daughters are still living who confirm this statement, not from their own knowledge, for the flag was made before they were born, but from the recollection of their mother’s often repeated narration and from hearing it told by others who were cognizant of the facts during their childhood; and there is also yet living a niece of Mrs Claypoole’s, Mrs Margaret Boggs (now in her 95th year) who resides with a niece in Germantown, Philadelphia, and still has full possession of all her faculties, who remembers well the incidents of the transaction as she heard it told, in her intimate intercourse with the family many times.

You can read the entire text here.

The real designer of the American flag was Francis Hopkinson, a signer of the the Declaration of Independence as a delegate from New Jersey. Hopkinson was the Chairman of the Continental Navy Board’s Middle Department and also designed a flag for them around 1777, too.

Hopkinson was the only person to make the claim of inventing the American flag in his lifetime until the Betsy Ross apocrypha surfaced a hundred years later. Substantiating Hopkinson’s claims are preserved bills he sent to Congress for his work. According to the United States Flag Organization:

Apparently acting on a request from Congress, Hopkinson sent a detailed bill on June 6th, and it was sent to the auditor general, James Milligan. He sent it to the commissioners of the Chamber of Accounts, who replied six days later on June 12th that they were of the opinion that the charges were reasonable and ought to be paid.

4. There Have Been Multiple Flag Acts Since 1777

The American Flag blows in the wind off the back of the Ellis Island/Liberty Island Ferry with the Statue of Liberty. (TIMOTHY A. CLARY/AFP/Getty Images)

Since the Flag Act of 1777, there have been multiple acts of Congress to update the American flag.

The Flag Act of 1794, signed into law by President George Washington, added stars AND stripes for the admission of Vermont and Kentucky into the Union. It would be the only flag of the United States to not have thirteen stripes to represent the original 13 colonies.

The Flag Act of 1818 returned the flag to thirteen stripes and provided the rule of adding a star for every state added to the Union. According to the act, stars added to the flag must be added on July 4, or Independence Day.

The most recent star was added for Hawaii on July 4th, 1960.

5. We May Soon Have a New Flag

Resident Commissioner Pedro Pierluisi (C) of Puerto Rico speaks alongside US Representative Jose Serrano (R), Democrat of New York, and Puerto Rican activists, urging Congress to allow an end to the island’s territorial status, during a press conference at the U.S. Capitol in Washington, D.C., on January 15, 2013. (SAUL LOEB/AFP/Getty Images)

The American flag may soon have its 51st star after Puerto Ricans voted overwhelmingly for statehood during a nonbinding referendum this past weekend. Puerto Rico became an unincorporated territory of the United States following Spain’s defeat in the 1898 Spanish–American War. Since then, Puerto Ricans have been considered natural-born citizens of the United States and may move freely between the island and the mainland. It earned the title of “commonwealth” in 1952.

In its history with the United States, Puerto Ricans have flirted with statehood. This past weekend, a majority of Puerto Ricans voted for it. 97% voted for statehood, but only 23% of eligible citizens voted, reports The New York Times.

Puerto Rico Gov. Ricardo Rosselló was urging Puerto Ricans to vote for statehood due to the island’s economic crisis. “The commonwealth filed for municipal bankruptcy in May, and is in the hole for $70 billion owed to various creditors. Poverty is rampant, unemployment is high,” writes CNN. If Puerto Rico became a state, it would receive federal funding to help alleviate this burden.

This reason is why Puerto Rico may not become a state. Due to its crippling financial crisis, Congress may not want to use its powers to pass a statute to officially admit Puerto Rico into the United States.

Another nonbinding referendum is scheduled this fall for Puerto Ricans to once again vote on statehood. 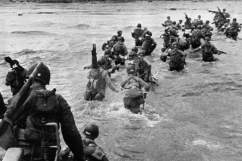 Loading more stories
wpDiscuz
1
0
Would love your thoughts, please comment.x
()
x
| Reply
Flag Day is celebrated on June 14 in the United States. The date commemorates the adoption of the flag of the United States by the Second Continental Congress on June 14, 1777.