Ivanka Trump’s company took to Twitter to share Father’s Day gift ideas at perhaps a very inopportune time. The tweet was posted by Ivanka Trump HQ on June 6, two weeks before Father’s Day, and the very same week that former FBI Director James Comey was set to offer his testimony in front of the Senate Intelligence Committee about his interactions with Ivanka’s father, the President of the United States.

Whether a football lover or a coffee aficionado, these picks will please every dad:https://t.co/xzoSzNiuVk #FathersDay #GiftGuide pic.twitter.com/I9RfWpLpJ8

The tweet was meant to give people ideas on what to buy for the men in their lives ahead of Father’s Day, which is on June 18. However, the gift suggestions didn’t receive a very positive response from social media.

Within minutes, Twitter users responded to the tweet, many posting harsh responses. While some people criticized the items that were part of the gift guide, others chose to take aim at President Trump, many asking what a person should buy for a man in jail.

You can see some of the tweets below.

What’s a good gift for a dad who’s heading to prison soon? Asking for a friend… #ComeyWeek

And what’s @IvankaTrumpHQ getting her dad – 2 big scoops of ice cream and beautiful cake to soothe the #manbaby as he goes down in flames?

We can buy both at very same stuff at most yard sales .what are you going to sell in prison?

Matching orange jumpsuits for father-in-law/son-in-law duos should for sure be on this list. #ComeyWeek #TrumpRussia

Although Ivanka has been serving as an advisor to her father, folks continue to slam her company and often take aim at her through social media.

Since moving to Washington D.C., Ivanka has handed over day-to-day control of the company to Abigail Klem. According to the New York Times, Ivanka transferred the company’s assets to a “new trust overseen by relatives of her husband.” However, Ivanka still holds some power when it comes to her brand — it’s just not clear how much.

“While there is no modern precedent for an adult child of the president, I will voluntarily follow all of the ethics rules placed on government employees,” Ivanka Trump previously said in a statement.

One interesting fact pointed out by the Times is that Ivanka has “separated her business and personal social media accounts.” This suggests that she doesn’t have much involvement in what goes out on her company’s Twitter account and that she probably isn’t sitting home reading the comments left for her.

Even still, the internet doesn’t hold back when it comes to slamming Ivanka. It’s something that she has experienced for years, albeit not on this level. Since her father announced his decision to run for president, the Trump family has been the butt of many jokes and memes. And while Ivanka’s brothers, Eric and Donald Jr., will often take to social media to fight back, the 35-year-old mother-of-three does her best to ignore the chatter. 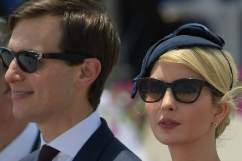