A cart carrying people on the Fire Ball ride at the Ohio State Fair has killed an 18-year-old man and injured seven other people in a tragedy the governor called the state fair’s worst in its history.

However, who operated the ride that snapped?

NJ.com reported that the Fire Ball “attraction is operated by Amusements of America, based in Monroe, Middlesex County” in New Jersey.

The victim killed in the accident has been identified as 18-year-old Tyler Jarrell, who recently graduated from Franklin Heights High School and enlisted in the Marines on July 22.

1. The Company Describes the Fire Ball as an ‘Aggressive Thrill’ Ride

The company’s website contains a description of the ride. “The Fire Ball combines swinging and spinning action all in one ride! Since it’s debut in 2002, the Fire Ball has become one of the most popular thrill rides on the AOA Midway. The Fire Ball swings riders 40′ above the midway while spinning them at 13 revolutions per minute!” the website says.

You can read the State of Ohio inspection documents for the ride here. They show that inspections, including one on July 26, found nothing amiss with the ride.

The Fire Ball is categorized as an “aggressive thrill” ride on the website. The company is located in Tennent, New Jersey, according to its website.

On July 21, Amusements of America wrote on Facebook, “Amusements of America will be pulling into Columbus, Ohio for the Ohio State Fair!!! Join us from July 26-August 6, 2017 for rides, foods and games. There are also tons of free acts along with entertainment… check out Ohiostatefair.com for a list of all there is to do!!! See ya there!”

The tragedy unfolded around 7:20 p.m. on July 26. Graphic and disturbing eyewitness video shows that a gondola car on the ride broke off or snapped, sending it hurtling to the ground. Other people then fell out of a separate gondola.

Warning: The video is disturbing. You can watch it later in this story.

The fairgoer who died was an 18-year-old man who was killed on impact after being thrown from the ride, authorities said in a later press conference. Two of the other seven victims were listed in critical condition and one in serious condition the following morning, they said. According to NBC4i, those injured victims are “an adult teenager, another in their 20’s and the third in their mid-40’s.”

You can see other videos from the scene here: 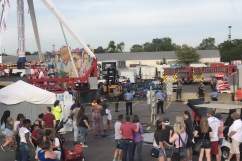 2. The Fire Ball Attraction Is Made By a Dutch Company

According to NL Times, “The attraction is sold by KMG under the name Afterburner. The ride consists of a pendulum arm with rotating baskets, in which people sit. A total of 24 people can go on the ride at a time. The ride tilts people into the air and then rotates at 15 rounds per minute. ”

The news site reported that, at the Ohio State Fair, “one of the baskets came loose and dropped to the ground at full speed, while people fell out of another basket. According to KMG project leader Albert Kroon, this happened at a speed of 80 kilometers per hour.”

NL Times quoted Kroon as saying that the Ohio tragedy was the first serious accident with a KMG machine and added, “The Afterburner ride has been through and passed multiple countries’ rigorous inspections. All parts are built with ‘minimum double’ the strength they require.” However, Kroon told NL Times that the maintenance is the operator’s responsibility and quoted him as saying, “On the Afterburner in Ohio we did the maintenance until a few years ago.” NL Times reported that the Fire Ball was built 1998, and Kroon didn’t have details on the maintenance. “19 years is old for an attraction, but there are older fairground attractions,” Kroon told NL Times. 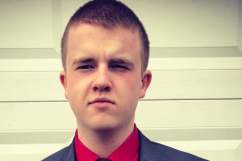 3. Amusements of America Is Listed in the Guinness Book of World Records

Amusements of America “is one of the nation’s premier carnival operators,” according to its website.

“We are listed in the Guinness Book of Records as the largest traveling amusement park in the world and currently carry over 100 rides and attractions. Currently, we carry an assortment of super spectacular rides including our Giant Wheel, Wave Swinger, Full Size Crazy Mouse Coaster, Avalanche Coaster, and the ever-popular Fire Ball,” the website reports.

Michael Vartorella, chief inspector of amusement ride safety for the Agriculture Department in Ohio, said in a press conference that the fair’s rides, including the Fire Ball, are inspected by Vartorella and a team of four inspectors.

The department inspects about 4,300 pieces of equipment throughout Ohio, he said.

“We take this job very serious and when we have a tragedy like this it hits us really hard,” said Vartorella, adding, “My children, my grandchildren ride this equipment; our guys do not rush through this stuff.”

Of the Fire Ball, he said, “This particular ride is what we call a spectacular piece; this piece is put up from multiple trucks, it comes together, it’s bolted together.” He said everything is looked at from the hydraulics to the electrical.

Rides are given a “pass or fail” after being inspected, he said.

Ohio Governor John Kasich said the Fire Ball was inspected multiple times by Ohio officials and added, “There were 11 rides that were not open …because they weren’t satisfied with the inspection. Since that time there are now four rides that are not open at all…We don’t want to hurry this process. They can only do the best that they can do but we will investigate.” He said authorities would “not take anybody’s word for anything.”

The governor added, “We will get to the bottom of this.”

4. The Company Was Founded 70 Years Ago With the Purchase of a Ferris Wheel & Is Run By a Group of Vivona Brothers

The company says on its website that it was founded 70 years ago.

“Since our founding seventy years ago, with the purchase of the Ferris Wheel from the 1939 World’s Fair, the company has enjoyed tremendous success. The five Vivona brothers, our experienced and insightful leaders, bring a lifetime of carnival operations knowledge to each and every one of our engagements,” the website says.

“The integrity and reliability of our operations, built over a lifetime, is testified to by our decades long relationship with many of North America’s largest and oldest events. Our route stretches from across the eastern seaboard and Midwestern United States from Miami to New York, Ohio to Tennessee, and the Carolinas South,” the website continues.

SC.com reported in 2009 that the Vivona brothers were then led by Morris, 89, Dominic, 77 and Phil, 74. “The family has been in the carnival business since 1940. Before that, they were in the frozen custard business,” the newspaper reported. There were originally six brothers, the newspaper reported, and it was the Vivona patriarch who first spotted the Ferris Wheel.

5. Some Rides Didn’t Open on Time & The Ohio State Fair Rides Will Be Inspected Again

Battalion Chief Steve Martin told NBC4i that “one of the rows of seats on the Fire Ball ride ‘snapped off.’

“I am terribly saddened by this accident, by the loss of life and that people were injured enjoying Ohio’s fair. Our thoughts and prayers go out to those grieving and injured. I have ordered a full investigation into this incident and have ordered that all fair rides be shut down until additional safety inspections can be completed.”

Under the header “exciting attractions,” the company says it “carries over 100+ amusement rides and attractions including spectacular rides, thrill rides, family rides, and kiddie rides! Check out what we have to offer you at your event!” In addition to fairs, the company’s website says it is “also available for corporate and large private bookings.”

Authorities said the fair’s rides will undergo a new round of inspections.

JUST IN: The @OhioStateFair **WILL** be open tomorrow. Rides not until they clear a new round of inspections. @wkyc

JUST IN From @OhioStateFair:
*Complete review of all rides underway
*11 rides did not open on time today b/c inspections werent finished.

PRESS CONFERENCE #OhioStateFair accident: "Victims were thrown 20-30 feet into the air — landing quite a distance from the ride," @wkyc

Here’s a video of the Fire Ball being inspected at the fair in 2012.