Hamburg is the site of 2017’s G20, or “Group of Twenty,” an international forum for governments and central bank governors. German Chancellor Angela Merkel is its current chairperson.

The meeting will bring together world leaders from all continents, but also marks the first official meeting of President Trump and Russian President Vladimir Putin. Earlier today, the duo was filmed meeting for the first time and shaking hands before having a private discussion later today.

G20 has always attracted anger from protesters. Julia Kulik, a researcher with the University of Toronto’s Munk School of Global Affairs, told Global News that the protests center around “corporate greed and anti-capitalist views.”

The summit has also been condemned for its lack of transparency.

The above video was shared on Reddit with one Redditor praising the delivery driver with, “Not all heroes wear capes. Some wear pizza boxes.” Another Redditor, who assumed that the recipients of the pizza were protesters, chided, “F**k capitalism! Oh hey I’m hungry let’s call dominos.” 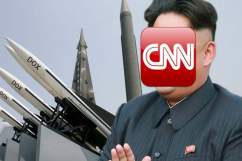 Loading more stories
wpDiscuz
3
0
Would love your thoughts, please comment.x
()
x
| Reply
As world leaders gather in Hamburg, Germany and rioters protest at the convention center, a pizza delivery man was filmed making his way through the crowd.