Evgeny Kayumov was on an Emirates flight when he accidentally caught an airline steward pouring champagne from a glass back into a bottle on camera. Kayumov wasn’t even attempting to capture the moment, but accidentally filmed it while he was taking a video on the upper deck of the A380 for his social media followers.

Kayumov commented in Russian on his video, “Emirates, accidentally got into the frame, did not even notice at first … Dump the bottle of champagne not drunk ? Or this is the norm?” He directed the question at the @emirates Instagram page.

The video has since been removed from his account, but before that it had been viewed nearly 12,000 times and had been “liked” over 700 times.

Comments ranged from sick face emojis to, “What stage of the flight was this?”

As some commenters pointed out, the flight attendant may not be pouring leftover champagne drank by someone else into the bottle. She may have simply overfilled a glass and was trying to compensate. Another commenter said that the steward may have poured more glasses than she needed to pass out.

Some other commenters also agreed that she may be trying to take some of the expensive champagne of herself.

It has been a rough year for airlines and social media. Earlier this month, Valentin Duthion, a French citizen, arrived in the United States for a vacation only to discover that his $40,000 wheelchair for his spinal muscular atrophy had been destroyed. The video of the wrecked wheelchair was shared on Twitter by Duthion’s sister on July 4 and quickly went viral. 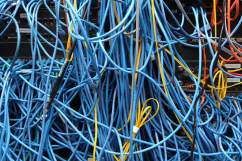 Read More
Airplanes, Youtube
Evgeny Kayumov was on an Emirates flight when he accidentally caught an airline steward pouring champagne from a glass back into a bottle on camera.