John McCain has been diagnosed with brain cancer. On Wednesday, his office released a statement, revealing that the senator had a blood clot removed just last week. McCain, 80, is said to be recovering well.

“On Friday, July 14, Sen. John McCain underwent a procedure to remove a blood clot from above his left eye at Mayo Clinic Hospital in Phoenix. Subsequent tissue pathology revealed that a primary brain tumor known as a glioblastoma was associated with the blood clot. Scanning done since the procedure (a minimally invasive craniotomy with an eyebrow incision) shows that the tissue of concern was completely resected by imaging criteria. The Senator and his family are reviewing further treatment options with his Mayo Clinic care team. Treatment options may include a combination of chemotherapy and radiation,” the statement read in part. You can read the full statement below.

Per his office, John McCain had a cancerous tumor in his brain removed last week pic.twitter.com/RzQamcsIRh

According to the American Brain Cancer Association, glioblastomas are “generally found in the cerebral hemispheres of the brain.”

“Glioblastomas (GBM) are tumors that arise from astrocytes—the star-shaped cells that make up the ‘glue-like,’ or supportive tissue of the brain. These tumors are usually highly malignant (cancerous) because the cells reproduce quickly and they are supported by a large network of blood vessels.”

Many have been concerned about the senator’s health in recent months, although rumors about his health have been around for years. Back in 2005, McCain responded to chatter about how he was feeling and said that his health was “excellent.” Five years prior. he was treated for melanoma on his face.

Just last month, when former F.B.I. Director James Comey testified in front of the Senate Intelligence Committee, McCain seemed very confused. His sentences didn’t make too much sense when he asked a question, many people wondered if he was okay. Social media lit up with concerns that McCain had suffered a stroke. You can watch a video of that here. 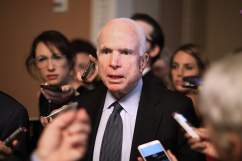 Sen. John McCain to Miss Week in Senate After Having Surgery