Tragically, Arizona Senator John McCain has died from a brain tumor, and it turns out that Senator Ted Kennedy and Beau Biden were afflicted with the same form of often deadly brain cancer.

Kennedy and Biden didn’t live long after their diagnoses, but anyone who has followed McCain’s career – from his time as a prisoner of war to his Senate career – knows he’s a fighter. However, McCain, who was diagnosed with the tumor in July 2017, died from the ailment on August 25, 2018, surrounded by his wife, Cindy, and his family. He was 81.

“This is the same type of cancer that Edward (Ted) Kennedy died of and it’s not a cancer that we really have good treatment for,” Phoenix Dr. Terry Simpson said of the McCain diagnosis.

Simpson told KTAR-TV, “We have some radiation and chemotherapy that can slow a tumor that can’t be removed with surgery, but that’s not a very good prognosis, I’m afraid.”

Senator Ted Kennedy (D-MA) talks with the news media after walking off the floor of the US Senate after a roll call vote to achieve cloture on the nomination of Judge Samuel Alito to the US Supreme Court passed 72 to 25 January 30, 2006 in Washington, DC.

The Washington Post noted that Beau Biden, the son of former Vice President Joe Biden, also died of the same type of tumor. The Post reported that the tumor is called a Glioblastoma and “is an aggressive cancer that is the most common of all malignant brain tumors. About 12,400 new cases are expected in 2017.”

McCain spoke highly of Kennedy’s response to his diagnosis.

"He never gave up," John McCain said of his friend Ted Kennedy. "He showed extreme optimism and that's the nature of the man."

The Boston Globe also noted, “The tumor discovered in McCain’s brain is the same type that was also found in Ted Kennedy, the late US senator of Massachusetts.” Kennedy died at age 77 in 2009 “after battling a brain tumor. He was diagnosed with a malignant glioma after suffering a seizure” that May, reported NBC News. Kennedy survived 15 months after his diagnosis, which is about the median survival rate for that kind of tumor.

However, others live longer; Beau Biden did. “Biden…the attorney general for the state of Delaware, was diagnosed in 2013 and had surgery, radiation and chemotherapy before going back to work. He died in May 2015 at the age of 46,” reported The Washington Post.

“A glioblastoma is the most common brain tumor that affects adults. It is also the most rapidly growing malignant tumor of the brain, with the shortest survival rate,” NBC reported. “Death may occur within months.” NBC reported that Kennedy “underwent targeted surgery to remove as much of the tumor as possible and a grueling regimen of radiation and chemotherapy.”

McCain released a statement to the news media that said in part, “On Friday, July 14, Sen. John McCain underwent a procedure to remove a blood clot from above his left eye at Mayo Clinic Hospital in Phoenix. Subsequent tissue pathology revealed that a primary brain tumor known as a glioblastoma was associated with the blood clot. Scanning done since the procedure (a minimally invasive craniotomy with an eyebrow incision) shows that the tissue of concern was completely resected by imaging criteria.”

The statement added, “The Senator and his family are reviewing further treatment options with his Mayo Clinic care team. Treatment options may include a combination of chemotherapy and radiation.”

McCain’s wife, Cindy, thanked people for their prayers and called McCain her hero in an Instagram post accompanied by a wedding photo of the couple.

Thank all of you for the wonderful thoughts. @senjohnmccain is doing well. We as a family will face the next hurdle together. One thing I do know is he is the toughest person I know. He is my hero and I love him with all my heart.

You can read more about McCain’s diagnosis here: 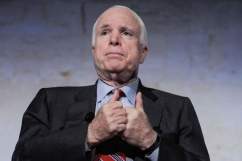 What Are John McCain’s Chances of Surviving Brain Cancer?